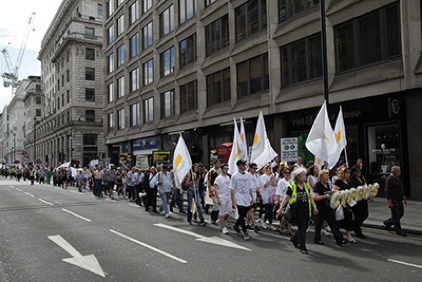 British Cypriots once again demonstrated in great numbers at the annual “Rally for Cyprus” in central London on Saturday 16 July, calling upon Turkey to end the 42-year long occupation of the northern part of the island so Cyprus can once again be reunited.

The demonstrators gathered outside Turkey’s embassy, where a delegation of the rally’s organisers, the National Federation of Cypriots in the UK, led by its President Christos Karaolis, delivered a resolution addressed to the Turkish Ambassador.

The resolution condemned the illegal Turkish invasion of 1974 and the “unlawful and unjust military occupation and colonisation” of the northern part of Cyprus. “Turkey must now change its intransigent stance on Cyprus and respond with positive actions to encourage progress in the direct negotiations taking place on the island towards a just and lasting settlement,” read the resolution text.

Speaking in front of the Turkish embassy, Mr Karaolis said: “For 42 years Turkey occupies the northern part of Cyprus. We are here once again to send a message to the Turkish Ambassador and to Turkey, that enough is enough; now is the time for real deeds and not words to resolve to Cyprus issue.”

The Rally outside the embassy was followed by the annual march through central London, with the demonstrators holding Cypriot flags, banners and pickets and calling for a “Free, United, Cyprus” and for “Turkish troops to be removed from Cyprus”. GLA Member Andrew Dismore, Cypriot MEP Mr Takis Hadjigeorgiou and the Mayor of the occupied Town of Lapithos Mr. Neoptolemos Kotsapas also joined British Cypriots for the Rally.

Before this year’s Rally, 10,000 leaflets outlining the rights and demands of Cyprus were distributed at 15 central London locations with additional leaflets also distributed during the march.

Following the Rally, a delegation including Rt Hon Theresa Villiers, representatives of the Cypriot Women’s League, the leadership of the Federation, the Cyprus High Commissioner, H.E. Evripides Evriviades, and Greek Ambassador H.E. Konstantinos Bikas, laid a ‘Cyprus’ wreath at the Cenotaph.

Then the Federation President, Mr Karaolis, handed a letter addressed to the new Prime Minister of the UK Theresa May at the entrance of Downing Street. He was accompanied by the leadership of the Federation as well as the Conservative MP and long-standing friend of Cyprus Rt. Hon. Theresa Villiers.

Mr Karaolis said that the letter congratulated Theresa May on her appointment and urged her “to make sure that the Cyprus issue would be kept high on the political agenda of the UK.” As the letter to Mrs May pointed out, “you have the power to make a lasting difference in relation to Cyprus and now is the time to exercise this proactively and constructively.”

Theresa Villiers said: “I have been campaigning for the freedom of Cyprus for 17 years. It is a great tragedy that Cyprus remains divided and I believe that it is crucial to keep on working hard for a negotiated settlement. We have a new Prime Minister in Britain, a whole new Government and a new Foreign Secretary and I will do whatever I can to make sure that Cyprus is high on their agenda. It is important to support the Cypriots to reach a lasting, balanced and just settlement to reunify the island and bring all of its people together once again.”

The President of the World Federation of Overseas Cypriot Youth (NEPOMAK), Antonia Michaelides also pledged to continue working to ensure the Cyprus issue remained high on the political agenda saying: “NEPOMAK continues to inspire the younger Cypriot generations to push for a united Cyprus as 42 years is far too long to have our island divided. We are re-doubling our efforts to lobby our Government to put pressure on Turkey for a just and peaceful solution to the Cyprus problem”.

The President of the World Federation of Overseas Cypriots (POMAK), Andreas Papaevripides pledge on behalf of Cypriots abroad to keep fighting for Cyprus no matter how many years have passed – especially in the UK where the largest Cypriot overseas community lives. “We will fight more than ever so that our positions are made known to the new UK Government,” he added.