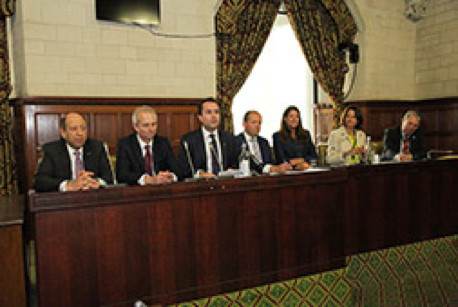 MPs from the across the political spectrum reaffirmed their commitment to continue supporting the Cypriot people and their government in their efforts to reunify their island through a lasting and just settlement of the long-standing Cyprus issue.

In a National Federation of Cypriots in the UK event at the Houses of Parliament on Tuesday evening, ahead of the tragic 42nd anniversary of the Turkish invasion and occupation of the northern part of Cyprus, Minister for Europe David Lidington spoke of a “historic opportunity” to reach a settlement.

Before the Annual Parliamentary Lobby, the Annual Picket for the Missing Persons, organized by the Organisation of Relatives of Missing Cypriots and the National Federation was held and attended by Sir Alan Meale MP and Mike Freer MP.

Welcoming MPs, UK Cypriots and other friends of Cyprus, the Federation President Christos Karaolis said: “What we’re asking for is simple. A just solution based on the relevant United Nations Security Council Resolutions and the High Level Agreements of 1977 and 1979. A fully functioning state that is in line with the EU acquis and EU values and principles and has a single international legal personality and a single sovereignty.”

He added that significant progress has been made on key chapters which gives us “cause for optimisim”, however substantial negotiations on other chapters such as Security and Guarantees have yet to take place, noting that progress on them “will in large part depend on Turkey’s willingness to remove its army of occupation from the territory of the Republic of Cyprus and on its sincere engagement with the UN-facilitated process with actions and not just words.”

Mr Karaolis highlighted the crucial role of the UK in relation to Cyprus, as well as the fact that the bilateral relations between the two countries are “the strongest they have been for some time.” He thanked David Lidington for his strong support and congratulated the new UK Prime Minister Theresa May and paid tribute to the outgoing PM David Cameron for his role in forging a much closer relationship between the two countries. Noting that following the recent vote for Brexit Cyprus can offer the UK invaluable support to help it negotiate the best possible deal with the EU, the Federation President urged the UK Government and the new Prime Minister “to do more and to use the leverage and the strategic relationship it has with Turkey to exert real pressure, as Turkey holds the key to a solution in Cyprus.”

Mr Lidington, the longest serving Europe Minister in a UK Government, said that we are “on the brink of a historical opportunity” in Cyprus. “I think it would be no exaggeration to say that the chances for an enduring settlement are better now than they were at any time since the period of the aborted Annan plan. And that we have come to this stage is a tribute to the courage of the leaders of both communities.”

He stressed that the political and human prize of a settlement and the reunification of the island would be “enormous” for all parties involved and he praised the “clear and powerful” message of President Anastasiades and Dr Akinci. He noted, however, that the way ahead “is going to require very difficult compromises from both sides”, especially as the talks on pending contentious aspects of the solution will be coming up.

Mr Lidington also commented that “it is not for the UK to come and tell how to find these compromises” as the settlement “must be seen to be led by Cypriots, not being imposed”. Nevertheless, he reaffirmed that the UK is doing all it can to support the two leaders and the negotiators, as well as Mr Eide in his work on behalf of the UN Secretary-General.

On the subject of bilateral relations following the vote for Brexit, David Lidington said that although it was not what he had been wishing for, the result of the referendum was clear and has to be respected. “Now we have to enrich our bilateral relations with our friends, such as Cyprus, which will remain a fellow member of the Commonwealth. We have an increasingly trusting relation with Cyprus on security and defence and we need to work together to overcome the common security challenges.”

Mr Lidington praised the work of the High Commissioner of the Republic of Cyprus to the UK Euripides Evriviades, describing him as “a real friend and champion of even stronger bilateral relations”.

In his remarks the High Commissioner congratulated the new UK Prime Minister Theresa May and paid tribute to the outgoing PM David Cameron for his role in forging a much closer relationship between the two countries. He then commented that the UK and Cyprus are in “the same strategic boat”. He said: “Cyprus is the dependable, reliable security producer partner in a volatile region.”

Regarding the Cyprus issue Mr Evriviades noted that substantial progress has been achieved in aspects of the chapters of governance, economy, European Union and property, however “fundamental differences still persist” and substantial discussions have yet to take place on the chapters of territory and security and guarantees. He then stressed that President Erdogan’s and Turkey’s contribution “in tangible terms” in the ongoing negotiations is vital. “There is no solution that can be reached without Turkey’s input,” said the High Commissioner.

The long-serving Conservative MP Sir Roger Gale, and Chairman of the All Party Parliamentary Group for Cyprus, also made a special reference to the need for President Erdogan to adopt a constructive approach to the Cyprus issue. He also reiterated his and his colleagues’ commitment to “stick with Cyprus for as long as it takes.”

Catherine West, a north London Labour MP and Shadow Foreign Minister, said that British parliamentarians will support the settlement process, with her personally pledging to do so for the benefit of the younger generations of Cypriots.

Conservative MP David Burrowes, said he “hopes, expects and prays” that we will not be in the same situation next year and that following the EU referendum in the UK he looks forward to a Cyprus referendum on a just settlement.

His fellow Conservative MP Sheryl Murray from Cornwall described how she realised how important is from UK politicians to support Cypriots and the Cypriot government when she saw for the first time last year the beach and the town of Famagusta cut off by barbwire.

Caroline Nokes, Conservative MP for Southampton, said that on the Cyprus issue there is cross party agreement and consensus, while Labour Kate Osamor MP, Shadow Secretary of State for International Development, added that Cyprus must never be forgotten.

Sir Alan Meale, a veteran of the Cyprus cause Labour MP, stressed that the UK has a great responsibility towards Cyprus, and that Cyprus is hugely important to the UK not least because of the military bases on the island and the 300,000-strong UK Cypriot community. He declared his optimism over the prospect of a just solution, saying that “it will come and things will move so fast that we will be wondering why it took so long.”

Sir Alan added that no settlement can be reached without a solution the issue of the missing persons in Cyprus. His words followed this year’s annual picket by the organisation of relatives of missing Cypriots who are based in the UK, outside the Parliament.

Sir David Amess MP, Conservative, said he is “very optimistic” about a settlement, pledging to keep working with his colleagues in Parliament to support the UN-led process.

MPs Mike Freer, Mark Pritchard and Diana Johnson, as well as Lord Hylton also attended the event and expressed their support for a solution to the Cyprus issue. Rt Hon Theresa Villiers sent her apologies as she was unable to attend the event due to Ministerial responsibilities, however expressed her continued support for Cyprus.