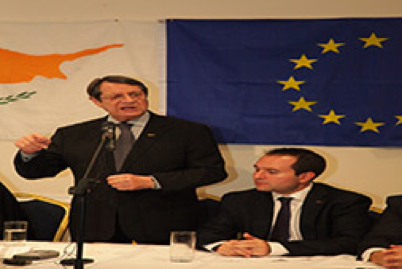 British Cypriots demonstrated their solidarity and support for President Anastasiades at a dinner in his honour in London. President Anastasiades was visiting London on his way back from the UN General Assembly in New York and as part of his visit to London he also met with Prime Minister Theresa May. Amongst other guests at the dinner, were the Archbishop of Thyateira, the Foreign Minister of the Republic of Cyprus, the Government Spokesman of the Republic of Cyprus, the High Commissioner for Cyprus and the newly appointed Ambassador for Greece.

At the dinner, organised by the National Federation of Cypriots in UK, President Anastasiades briefed the community about the latest and the forthcoming developments in the negotiations, touching upon specific chapters of the talks. The Cypriot leader said he was determined to carry on working for a solution to the decades-long problem that would end the division of the island, with a negotiated settlement which would be “viable and workable and addressing the concerns of both (Greek and Turkish Cypriot) communities.”

President Anastasiades praised the contribution of the populous Cypriot community in the UK, expressing his “admiration” over the persistent way in which they strive for better days for Cyprus, “beyond any personal ambition.”

President Anastasiades also expressed his delight at the presence of the large of the young British Cypriots from NEPOMAK at the event. He also paid tribute to the recently deceased Chris Lazari, a distinguished member and strong supporter of the UK Cypriot community, whose son Len was present at the event.

Welcoming President Anastasiades to London, the President of the National Federation of Cypriots, Mr Christos Karaolis congratulated the President of the Republic for his “insistence, patience and determination” to solve the Cyprus issue and reunite the island. He also praised Mr Anastasiades for his “undogmatic” work in methodically and systematically establishing international cooperations and alliances to safeguard the Republic of Cyprus’s interests.

Christos Karaolis went on to express the solidarity of British Cypriots with President Anastasiades saying “I want to reassure you that the Federation and the community will stand by your side ready to assist in our collective mission to deliver what all Cypriots want – a free united Cyprus.”

Mr Karaolis referred to the important role that the UK has with regard to Cyprus and noted that the community will carry on demanding from British MPs and the government to fulfil their country’s responsibilities as a guarantor power.

At the end of the evening, the National Federation of Cypriots also presented President Anastasiades with a birthday cake in the shape of Cyprus, on the occasion of his 70th birthday (27 September).