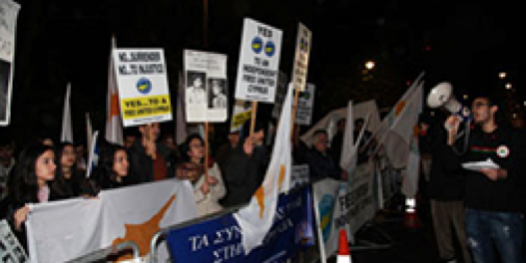 Picketing the Turkish Embassy in London on Tuesday 15 November, a vocal demonstration, organised by the National Federation of Cypriots in the UK, made itself heard despite the Embassy’s refusal to recognise the protest, or to engage in dialogue with British Cypriots. British Cypriots made their voice heard outside the Embassy condemning the illegal declaration of the pseudo-state and calling on Turkey to remove its troops from Cyprus and to honour its obligations to Europe and Cyprus.

This year marked the 33rd consecutive year of the picket outside the Turkish Embassy on the black anniversary of the illegal Universal Declaration of Independence. The declaration was condemned by UN resolutions 541 and 550 and the illegal state has not been recognized by any country except Turkey.

During the picket, the President of the National Federation of Cypriots was joined by the President of POMAK, Officers and Members of the Federation’s Executive, the President of NEPOMAK and the former President of EFEK (Cypriot Students in the UK) to deliver a resolution to the Turkish Ambassador. The letter of resolution called on Turkey to demonstrate with actions not words its support for the current negotiations to reunify Cyprus by withdrawing the Turkish occupying army, dropping its anachronistic demand to be a Guarantor power. The resolution also called on the Turkish government to abide by the resolutions of the UN Security Council, the European Union and international law. The resolution also called upon Turkey finally to resolve the terrible human tragedy of the Cypriot people who went missing during its invasion of the island in 1974.

A resolution was also sent to Prime Minister Theresa May, calling on the UK Government to exert its influence on Turkey to help reunite Cyprus.

“Over the course of the last one and half years, President Anastasiades and Mr Akinci have made significant progress in their efforts to reunite Cyprus. A re-united Cyprus where Greek and Turkish Cypriots could peacefully live and prosper is both attainable and viable.  Both together would likely make the country an international and regional trading hub, particularly as the Republic has one of the world’s largest registered shipping fleets, extensive financial and business networks, possesses major oil and gas deposits off shore and is rapidly developing technology and tourist sectors capable of surviving in the toughest markets. It would also offer a beacon of hope for both Christians and Muslims alike to live peacefully together in a part of the world which has become unaccustomed to such a reality.

However, this will only happen if Turkey refrains from interventions that undermine the negotiations and demonstrates the necessary political will to remove its troops from the island, drops its outdated guarantor demands and returns the occupied territory to its rightful owners.”