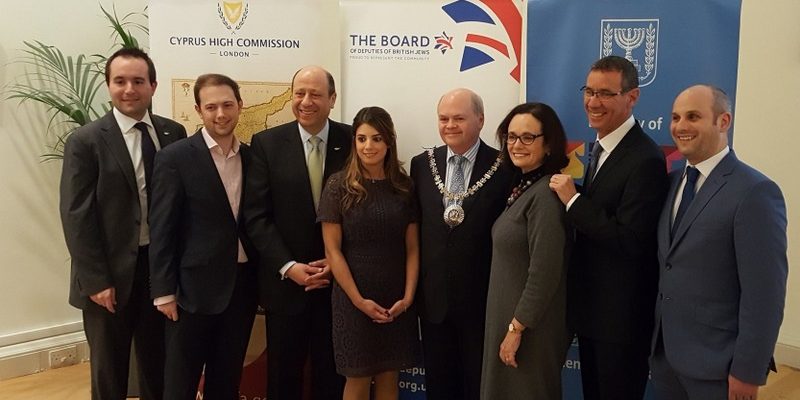 The close cooperation between Cyprus and Israel was highlighted on Thursday evening during an event organised in London by the Cyprus High Commission and the Embassy of Israel, with the support of the National Federation of Cypriots in the UK and The Board of Deputies of British Jews.

The event, hosted at The Hellenic Centre, featured a presentation about the British internment camps for Jewish refugees set up in Cyprus at the end of the Second World War. The presentation was made by Elianna Hadjisavvas, a Ph.D candidate in Modern History at The University of Birmingham.

The High Commissioner of the Republic of Cyprus to the UK Euripides Evriviades said in his welcoming address that there are no other races that have left their mark around the globe in the way the Jewish and Greek people have. He also underlined the historic ties between Cyprus and the Jewish, as well as the strong current relationship between Cyprus and Israel.

The Israeli Ambassador Mark Regev said the event was not only an indication of the good cooperation between the diplomatic missions and the organised Diasporas of the two countries in the UK, but also “symptomatic of a bigger, strong relationship and friendship” between the two countries. He described Cyprus as “one of Israel’s closest allies,” with cooperation on a wide range of issues.

On behalf of the National Federation of Cypriots in the UK its President Christos Karaolis noted that Cyprus and Israel are the two “stable and predictable” democracies in the Middle East and that they share a close collaboration across energy, security and defence. He commented that the geographical proximity dictates the closest of cooperation based on mutual trust and interests. Mr Karaolis also welcomed the fact that the umbrella diaspora bodies of the Cypriot and Jewish diaspora in the UK are now formalising a fruitful collaboration through an established partnership. He said “Our respective Diasporas are equally sized, about 300,000 each, reside in broadly the same areas across North and East London and the issues that concern our communities are the same. By strengthening and formalising the already existing bonds of friendship between our two communities the sum, the influence and indeed the success of our collective efforts will be greater than either one of us alone”

The Senior Vice-President of The Board of Deputies of British Jews Richard Verber referred to the large number of visitors that Cyprus attracts from Israel and spoke of an “increasingly warm relationship” between the two countries. Mr Verber also welcomed the collaboration between the National Federation of Cypriots in the UK and the Board of Deputies of British Jews saying he “was sure this would be the first of many joint initiatives”.

In her presentation Ms Hadjisavvas explained how in the aftermath of the Second World War, thousands of visa-less Holocaust survivors sought to flee the horrors of Nazi Europe by embarking on clandestine voyages to the British Mandate of Palestine, most often from Italian ports.

In August 1946, the British government responded to such movements by establishing internment camps in Britain’s colonial territory of Cyprus. The erection of 12 distinct campsites in the villages of Caraolos and Xylotymbou collectively housed over 52,000 people and witnessed the births of over 2,000 children until the camps dissolution in February 1949.

She described how life was in the camps for the internees, the frequent outbreaks of discontent and sometimes violent confrontations with their British guards, as well as acts of providing help to them by Cypriots.