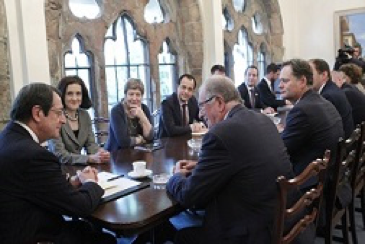 A cross-party delegation from the All Party Parliamentary Group for Cyprus recently visited Cyprus to express the support of the British Parliament for the ongoing negotiations to reunite the island and its people.

The delegation met with President Anastasiades to discuss the progress, as well as some of the crucial issues still to be resolved in the negotiations to reunite Cyprus, as well as the ongoing Brexit negotiations. In the meeting, President Anastasiades thanked the parliamentary delegation for their longstanding friendship and encouraged them to continue their support for Cyprus. He went on to express his strong desire for a solution to reunite Cyprus, despite the challenges faced.

The delegation also met with the President of the House Representatives Demetris Syllouris, the Greek-Cypriot Chief Negotiator Andreas Mavroyiannis, members of the House Standing Committee on Foreign and European Affairs, as well as the Mayors of the Occupied Municipalities.

The APPG delegation welcomed the progress made in the current negotiations and acknowledged the legitimate concerns expressed over some of the remaining open issues including security and guarantees, refugee property and territory as well as the funding and implementation of a solution.

The delegation also discussed the issue of the Missing Persons and Enclaved both with the Presidential Commissioner Mr Photiou as well as the House Standing Committee on Refugees, Enclaved, Missing and Adversely Affected Persons.

The delegation committed to continuing to vocally support Cyprus in the British Parliament and raising the issues discussed and concerns expressed with the British Government and in Parliament.

Chairman of the APPG, Sir Roger Gale MP (Conservative) said “There are clearly very significant issues that still have to be resolved but the benefits to both communities when an agreement is reached are enormous. Both sides have shown great political courage and goodwill. We hope that Cypriots will be given a chance to negotiate a settlement, without external influence, that will gain approval in referendums.”

APPG Vice Chairman, David Burrowes MP (Conservative), said “At this crucial time in the negotiations we came to Cyprus as British Parliamentarians across parties and Parliament to show our support for a solution. We were struck by the dedication and courage being shown to reach a settlement. We also recognise the challenges on security and guarantees and need for the UK to do all it can, particularly in its relationship with Turkey, to support an independent reunited European nation free of Turkish troops.”

Rt Hon Theresa Villiers MP (Conservative), said “I felt it was important to visit Cyprus at this crucial time in the long-running negotiations between the two sides. For 17 years, I have been supporting the Cyprus cause and calling for the reunification of the island. I welcome the hard work done by President Anastasiades and Mr Akinci which I hope is bringing us closer to a settlement.” She went on to say “My visit has left me in no doubt that this will not be easy, but I believe that both leaders are sincere in their efforts to try to bridge the divisions between them. There was a clear message from everyone we met that there could only be a successful conclusion to the talks if Ankara was prepared to let Cypriots determine their own future. Issues around security also remain very sensitive and difficult to resolve. I and my parliamentary colleagues gave our full support to the process and encouraged all the Cypriot leaders we met to continue to strive to reach the goal of a just, balanced and lasting solution to reunite Cypriots.”

Stephen Hepburn MP (Labour), said “It was an honour to visit Cyprus at this crucial time in its history. The briefings we received from the highest levels were extremely informative. Despite the challenges, I am most impressed with the commitment to do the best thing for all of the Cypriots across the whole of this beautiful island by delivering a solution that secures the return of refugees, resolves the issue of the Missing Persons and meets the security needs of both communities through Cyprus’ membership of the EU and UN”

Steven Paterson MP (Scottish National Party), said “The opportunity to meet political leaders here in Cyprus has been extremely valuable and informative, and I am extremely heartened by the optimism that despite the challenges there clearly are, there is a huge opportunity to build on the progress made in recent years in the political situation here to the benefit of both Cypriot communities.”  He went on to say “Scotland’s relationship with Cyprus is close and longstanding, and we fully support Cyprus in moving forward to a positive and prosperous future.”

Baroness Massey (Labour), said “I found the APPG visit to Cyprus frank and open. It was clear that the current window of opportunity in the negotiations between President Anastasiades and Mr Akinci is crucial. Much progress has been made in the negotiations, however it is clear that Turkey now has a crucial role to play. We will continue to offer our full support in Parliament.”

Matthew Offord (Conservative) said “This is a momentous moment in the history of Cyprus and one that is vital to the future of the island. Separation of the two communities has continued for too long and now is the time for a solution to be agreed. President Anastasiades and Mr Akinci have to be applauded for their bravery in instigating and persevering with the talks and I urge them to continue and not be distracted by others, who have an interest in maintaining the status quo. There is clearly further work to be undertaken in order that an agreement – which is supported by both Turkish and Greek Cypriots – can be presented in the form of a referendum. This is a once in a generation opportunity and during our visit I emphasised that the United Kingdom will undertake any action considered necessary in order that Cyprus can, once again, be a united island.

The President of the National Federation of Cypriots in the UK, Christos Karaolis, said “I welcome the continued support of our Parliamentary friends, especially at this crucial time in the negotiations. Significant progress has been made over the last two years, however it is becoming clear to all that the key to reuniting Cyprus, and resolving these outstanding crucial issues, lies in Turkey. Anachronistic guarantees and foreign troops have no place in a reunited Cyprus”. He went on to say “President Anastasiades continues to have the full support of UK Cypriot diaspora.”