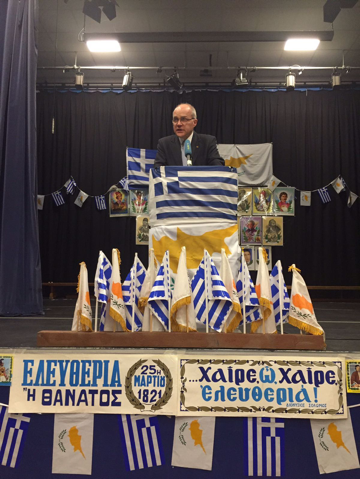 On Sunday 26 March, the Greek and Cypriot communities of the United Kingdom celebrated the anniversaries of the Greek Revolution of 25 March 1821 and the Cypriot struggle for independence which began on 1 April 1955. A community-wide event at Ashmole Academy was organised by the National Federation of Cypriots in the UK to mark the anniversaries.

The main speaker of the event was His Excellency the Ambassador of Greece, Mr Dimitris Caramitsos-Tziras, who spoke about the historical context in the early 1800s that triggered the formation of the Filiki Eteria organisation, the struggle for Greek freedom, the army of philhellenes led by Lord Byron and eventually the liberation of Greece from Ottoman rule and the establishment of the modern Greek state. The Ambassador then spoke about the need for the international community to hold Turkey accountable for its current provocative behaviour. Mr Caramitsos-Tziras concluded his remarks by expressing his hope that we see a just and viable solution to the Cyprus Issue and stressed that a just solution is in everyone’s interests.

His Excellency The High Commissioner for Cyprus spoke about the heroes of 1821 and 1955 and told the audience that the sacrifice, altruism, selflessness and heroism of those heroes remained in the memories of all the generations that followed them and that the generations following our own will also remember them.

The President of the Greek Orthodox Communities in the UK, Marios Minaides, asked that Greeks around the world become more united in order to maintain their identity and community. Mr Minaides said that such unity would also contribute to finding a peaceful and just solution to the Cyprus Issue.

Archbishop Gregorios of Thyateira and Great Britain then addressed the audience and emphasised the importance of solidarity and generosity in the difficult times we live in. He highlighted the refugee crisis that has reached Greece and Europe as an example of a crisis where we must all show the best values and ideals of humanity to our fellow man.

Mr Christos Karaolis, President of the National Federation of Cypriots in the UK, spoke next and paid homage to the heroes of the Greek Revolution and Cypriot struggle for independence. Mr Karaolis expressed the community’s support for the Greek and Cypriot governments in the struggles that they face. Mr Karaolis added that we all must strive towards justice, the end of the Turkish occupation, the end of the anachronistic system of guarantees, the return of refugees, and a just and functioning solution to the Cyprus Issue. He ended his remarks by wishing for relief for Greece and the people of Greece from their financial troubles.

After the conclusion of the speeches, local Greek schools performed and told the stories of the Greek and Cypriot heroes of the past. The children performed exceptionally well and special acknowledgment for the performances go to the Cyprus Educational Mission (KEA), the Education Office of the Greek Embassy, the Committee of the Central Education Council (KES), the Federation of Educational Associations of Greek Cypriots in England (OESEKA), The Committee of the Independent Greek Schools in England (AESA), and the Committee of the Independent Greek Schools Manor Hill and Finchley.

Once the performances had finished and the stories of the past had been told, a number of children who had taken part in an art competition were presented with awards. The competition was held in community Greek schools around the country and children drew pictures to mark the anniversaries of the 25 March 1821 and 1 April 1955. Awards were presented to the following children: Stamatis Aggeletos and Beth Hollis of St Barnabas school; Natalia Tsamili, Nefeli Tsamili, and Fotoulla Evangelou of Goffs school; Diana Angambambian and Elisabeth Apostolidi from the Greek Primary School of London; Alexandra Lazaridou from Great Yarmouth school; Panayiota Michail from Weston Super Mare school; Marianna Andreou from Southgate school; Iliana Quinn and Elisia Theochari from Potters Bar school; Efrosini Georgiou from St Panteleimon school; George Chrysostomou from Ashmole school; Lilian Bogdan from St Eleftheriou school in Leyton.

The National Federation of Cypriots in the UK would like to thank Susie Constantinides for leading the Federation’s Organising Committee, Andreas Karaolis and Maria Charalambous for presenting the programme, and Maria Papalouca for compiling the programme. Particular thanks are extended to the excellent team representing the National Federation who helped out on the day and contributed to the smooth running of the event – Nakis Merkis, Michael Zacharia, Neo Merkis, Despina Artemiou, Christos Tuton and Chara Papakyriacou.