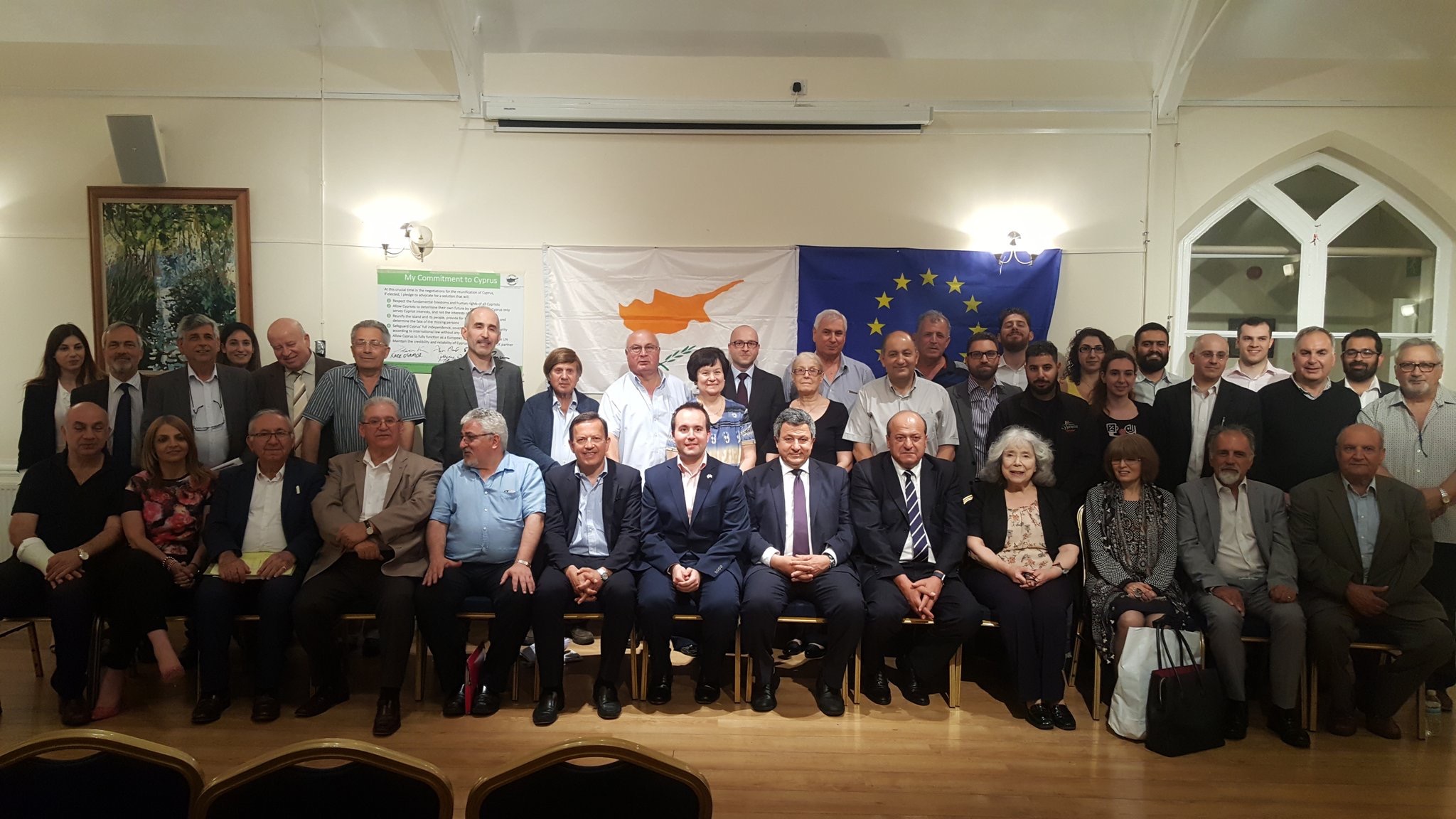 On June 15th the National Federation of Cypriots in the UK held its biennial elections for its Secretariat and Officers in the presence of the Consul General of the Cyprus High Commission, Mr Ioannis Koukoularides. Christos Karaolis, the first third-generation Cypriot to hold the position, was re-elected as President. Reflecting on his first term, Mr Karaolis said that, “whilst we’ve had a lot of successes over the last two years to advance the Cyprus Issue and the UK Cypriot community, there is still much more to do. I’m looking forward to working with our new team which has an exciting balance of young energy and experience.”

Mr Karaolis spoke of his great pride at the election of a member of our community, Mr Bambos Charalambous, to the House of Commons whilst also thanking Mr David Burrowes, (Mr Charalambous’ predecessor) for his hard work for the Cypriot community. Mr Karaolis also expressed his deep sadness that Sir Alan Meale, a friend of Cyprus for 30 years, had lost his seat in Mansfield. Before concluding his speech, Mr Karaolis took a moment to pay tribute to the work of his predecessors, Dr Homer Habibis, Mr George Christophides, Mr Haris Sophoclides and Mr Peter Droussiotis as well as the Executive Secretary, Mr Andreas Karaolis.

Mr Karaolis stressed the close collaboration of the Federation with the Cypriot High Commission, the Greek Embassy and the Greek Orthodox Church. He also mentioned the numerous events held by the Federation and contacts made between the Federation’s members and stakeholders in Parliament and decision makers in the UK.

Mr Karaolis highlighted key areas of focus for his second term. Firstly, Mr Karaolis spoke of the importance of raising awareness of the Cyprus Issue by further expanding Cyprus’ parliamentary friends, as well as building partnerships with other diasporas and organisations. Secondly, he spoke about the need to develop a comprehensive strategy to engage second- and third-generation Cypriots to further advance the community.

The Federation elected its Secretariat and, from the members of the Secretariat, elected its President, 3 Vice Presidents, General Secretary, and Treasurer. The full list of names and their positions can be found below.

A notable outcome of this year’s election was that, for the first time, a quarter of the Federation’s Secretariat are now under the age of 38. The Federation’s member associations welcomed this as a very positive sign that young, British-born Cypriots are actively engaged with the future of the UK Cypriot diaspora, as well as the Cyprus Issue. The large proportion of younger Secretariat members will bring fresh ideas and energy to the organisation and the UK Cypriot community.

At the very start of the meeting the President Mr. Christos Karaolis gave an update on the Federation’s activities for the term 2015-17 and thanked the Secretariat and the member associations for their hard work during that period. He also expressed his grief for the tragic terrorist attacks in the UK and the tragic fire in Grenfell Tower leading the meeting into a minute’s silence.

The Treasurer, Mr Ninos Koumettou, provided an update on the Federation’s financial position and said that he was very satisfied with the period 2015-17.

After the elections for the Secretariat were concluded, the representatives of Federation member associations that were present discussed the Federation’s latest news. They discussed topics including the Cyprus Pledge Card campaign; the events in July to mark the anniversary of the illegal Turkish invasion and occupation in 1974; the PSEKA Conference in Washington DC on 6-8 June; and the POMAK/PSEKA Conference in Nicosia on 21-23 August which POMAK President Mr Andreas Papaevripides reminded the Federation that each member association can send a delegate to.

Significantly, Ms Susie Constantinides announced that following police advice and the difficulty in obtaining insurance, the annual Rally for Cyprus will not be held this year. Instead, all efforts will be put into the annual Parliamentary Reception for Cyprus on Tuesday 11 July and the picket for the missing persons that will take place shortly before.

The following were elected as Officers of the Federation: