THIS Thursday VOTE for supporters of Cyprus 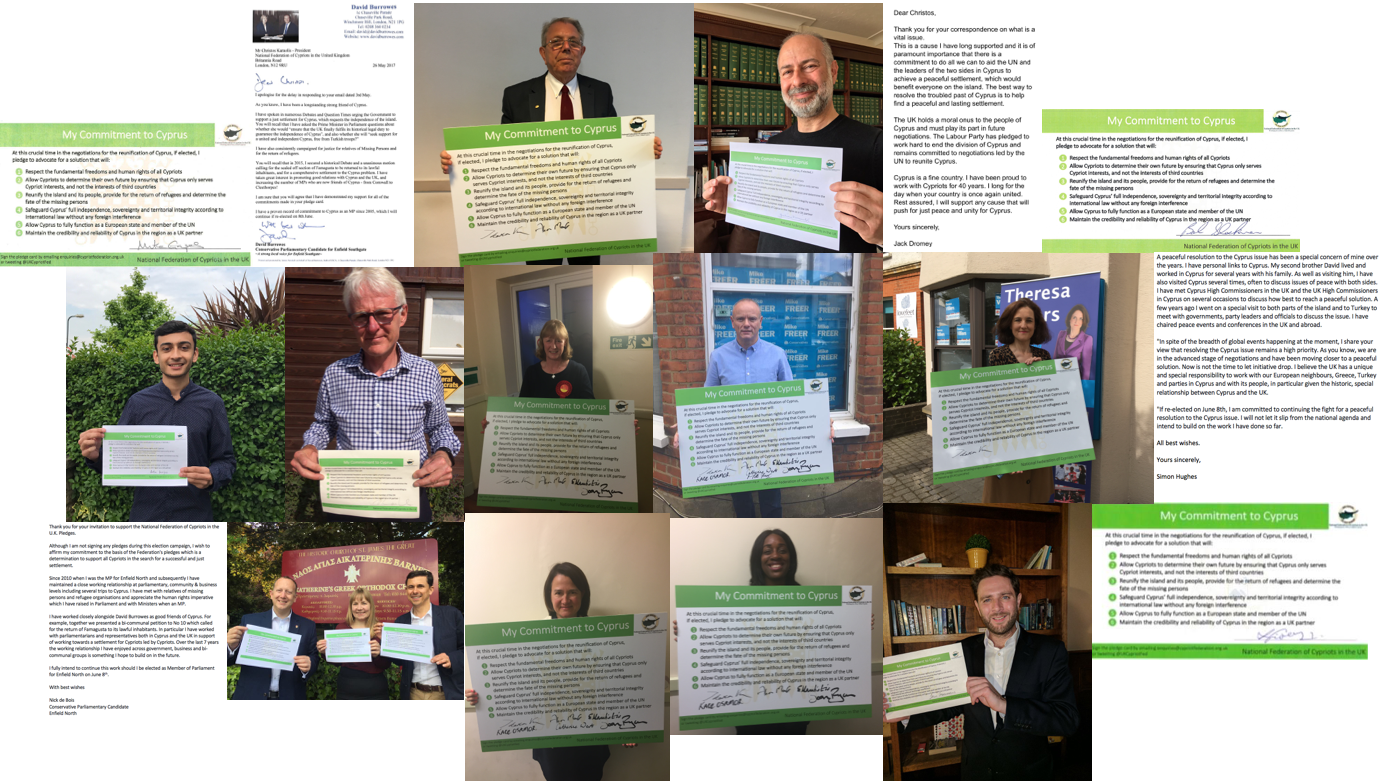 The National Federation of Cypriots in the UK urges the Cypriot community to vote in the General Election on Thursday 8 June. Federation President, Christos Karaolis, said “the community must make its voice heard on the 8th of June by going out to vote for those candidates who have demonstrated their support for Cyprus. Indeed, in light of the recent terror attacks in Manchester and London, it is all the more important that we send a clear signal to those who seek to threaten our democracy and way of life that they will not succeed. Voting will only take a few minutes of your day and it is the only way that your voice, and our community’s voice will be heard.”

There are a number of candidates standing for election who are supporters of Cyprus and our community. We must cast our votes to ensure that these candidates, from all political parties, are elected as Members of Parliament. These candidates have actively shown that they support a free, united Cyprus based upon a just and viable solution to the Cyprus Issue; asked questions and spoken about Cyprus in Parliament; attended and supported our events; and have campaigned against the Turkish occupation. A number of these candidates have also signed the Federation’s Cyprus Pledge Card.

It is crucial that the Cypriot community goes out and votes. Our vote is our voice!

During this General Election campaign, the National Federation of Cypriots in the UK has been inviting candidates to sign a Cyprus Pledge Card to raise the profile of the Cyprus Issue. We would like to thank those of you who have helped make this campaign a success by writing to your local candidates about Cyprus and the Cyprus Pledge Card.

Below is a complete list of candidates who have signed and stated their support for a solution in Cyprus based on the six points expressed in the Cyprus Pledge Card.

On behalf of the UK Cypriot community we would like to express our deepest gratitude to those candidates who have demonstrated their continued support – they are deserving of our community’s vote.

Enfield Southgate | David Burrowes
Sent the Federation a letter demonstrating his support for the commitments in the Cyprus Pledge Card.

Enfield North | Nick De Bois
Sent the Federation a letter demonstrating his support for the commitments in the Cyprus Pledge Card.

“I’ve campaigned for a free, united Cyprus for 34 years, ever since a Cypriot constituent of mine approached me with a photograph of the house he was forced to leave after the invasion. There are no more excuses for not having a reunified Cyprus. It’s time for a solution.

“At this election, just as at every other election, I would like to reaffirm my position that a free, united Cyprus can be achieved and I hope that the current Cyprus talks restart and lead to a solution that is acceptable to all Cypriots and will gain approval in referendums.

“There are clearly significant issues that still have to be resolved but there will be enormous benefits to both communities when an agreement is reached. We hope that Cypriots will be given a chance to negotiate a settlement for all Cypriots and without external influence. I sign this Cyprus Pledge Card at such an important point in the talks to reunify Cyprus and I will continue to campaign for Cyprus in the next Parliament if elected on the 8th of June.”

“I am pleased to sign the Cyprus Pledge Card and would like to take this opportunity to share my view that a reunified Cyprus where Greek and Turkish Cypriots could peacefully live and prosper is both attainable and viable. Whether this can be achieved or not depends on the political will of Turkey. Since its invasion in 1974, Turkey has held the key in the reunification of Cyprus and its continued intransigence is worrying.

“Turkey continues in its demand for maintaining the anachronistic system of guarantees as well as in its threatening behaviour towards the Republic of Cyprus’ right to explore its Exclusive Economic Zone for hydrocarbons. Turkey remains reluctant to cooperate in the search to determine the fate of missing persons and won’t allow investigations to take place in certain places it has marked as military areas.

“There can be a solution in Cyprus if Turkey demonstrates the necessary political will and withdraws its outdated demands. Mr Akinci must also ensure that he is negotiating for the benefit of Turkish and Greek Cypriots rather than Turkish citizens.”

“I have been campaigning for freedom for Cyprus for 18 years. It is a grave injustice that Cyprus has been divided for so long, with thousands of people forced from their homes. I strongly support efforts to reach a just, lasting and workable settlement which will see Cypriots reunited and living together as one country. This would benefit all Cypriots.

“I have attended countless Cypriot community events, including every Trafalgar Square rally for Cyprus since 1999. Time and again I have enabled Cypriots to have their voice heard at the highest levels of Government.

“Campaigning for justice for Cyprus has been one of the defining issues of my time in elected office. No other candidate comes close to matching my commitment. If I am re-elected as MP for Chipping Barnet, I will continue to strive for a free and united Cyprus.”

“Throughout my time representing Finchley and Golders Green, and previously as Leader of Barnet Council, I have worked very closely with the National Federation and the Cypriot community in the UK to raise the profile of the Cyprus Issue. I have attended community eventss both locally and in Parliament.

“It’s time for a solution in Cyprus based upon the principles expressed in the Cyprus Pledge Card. A solution must be Cypriot-led and it must respect the fundamental freedoms and human rights of all Cypriots. It must also safeguard Cyprus’ full independence, sovereignty and territorial integrity against any foreign interference.

“A free, united Cyprus based upon a just and viable solution can be achieved and that’s why I’ve signed the Cyprus Pledge Card.”

You can search for our posts about the Cyprus Pledge Card on twitter by using the hashtags #CyprusPledgeCard or #Vote4Cyprus.

We call on the UK Cypriot community to go out and vote on Thursday 8th June for candidates that have demonstrated real support for Cyprus in the past; have campaigned for a free, united Cyprus; have campaigned against the Turkish occupation; and have signed the Federation’s Cyprus Pledge Card.

Our Vote is Our Voice!