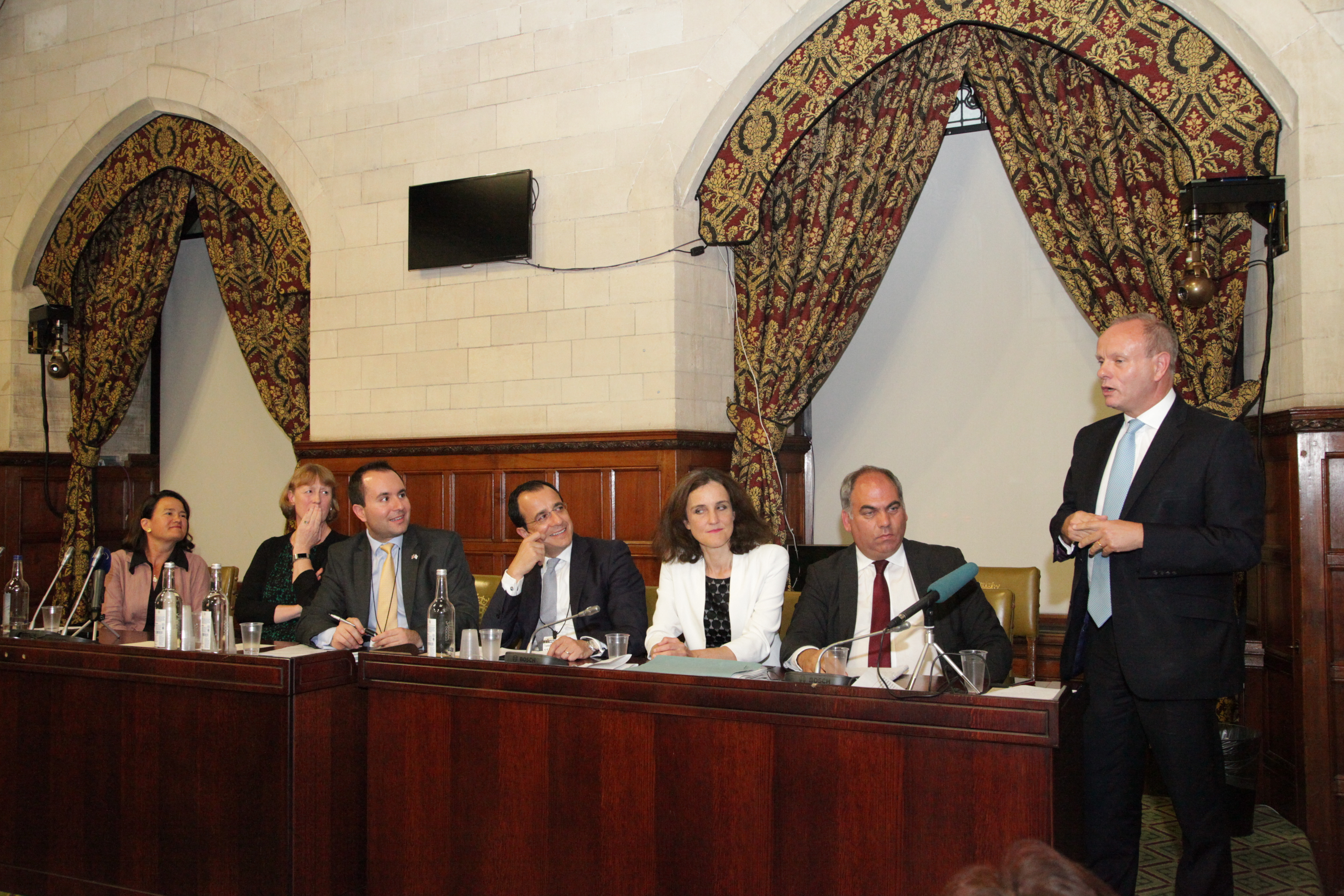 Cyprus: The Quest for a Solution

The National Federation of Cypriots in the UK and the All-Party Parliamentary Group (APPG) for Cyprus held its annual Parliamentary Reception for Cyprus last night to mark the tragic anniversary of the illegal Turkish invasion and occupation of July 1974. During the event, titled ‘Cyprus: The Quest for a Solution’ the Government Spokesperson of the Republic of Cyprus, Nikos Christodoulides, updated a full house of Parliamentarians and members of the UK Cypriot community about the recent Conference on Cyprus in Crans-Montana, Switzerland.

Federation President, Christos Karaolis, welcomed guests to the event and spoke of the UK Cypriot community’s determination to support efforts to find a solution that unites Cyprus, and ensures that Cyprus is free from foreign guarantees and Turkish troops. He said, “in the face of increasing Turkish intransigence, now is the time for all Cypriots – whether they are Greek Cypriot, Turkish Cypriot, Maronite, Latin or Armenian – to ensure that our demands for a truly independent and sovereign Republic of Cyprus, are heard loud and clear.”

Mr Christodoulides spoke about the recent Conference on Cyprus in Crans-Montana, Switzerland. Mr Christodoulides began by outlining the framework for the meeting prepared by United Nations Secretary General, who chaired two days of the Conference on Cyprus. He went on to say that the UN Secretary General had stated that a new system of guarantees was needed and called for the termination of any right of intervention in favour of a new security system where all Cypriots would feel secure. Mr Christodoulides said that during the recent negotiations “the Turkish side refused to substantially negotiate within the UN Secretary General’s framework and therefore an impasse in the negotiations was reached.”

The Cypriot Government Spokesperson continued, “[in order to end the impasse] President Anastasiades submitted proposals which effectively addressed the concerns of both Greek and Turkish Cypriots… President Anastasiades’ proposal stated unequivocally that it was only valid if the right of intervention and the system of guarantees were abolished; there was full withdrawal of the occupying Turkish troops based on an agreed timeline; and the expectations of the Greek Cypriot side on territorial readjustments were met. All participants reacted positively to the proposal apart from the Turkish side, whose unwillingness to cooperate forced the UN Secretary General to close the meeting.” Mr Christodoulides concluded by expressing his regret that Turkey appears unwilling to work within the UN framework for a solution and stated that “our goals remain unchanged, we are fully committed to having a truly independent, sovereign, reunified state, free of any dependencies on third countries.”

Sir Roger Gale, who had earlier been re-elected Chair of the APPG for Cyprus, informed attendees that, “MPs across all parties remain as resolved as they ever have been for a solution in Cyprus.” Sir Roger concluded by paying a warm tribute to the extensive work of former MPs Sir Alan Meale and David Burrowes in advancing the Cyprus cause in Parliament during their time as MPs.

Speaking after Sir Roger, Baroness Massey of Darwen emphasised her continued support for the reunification of Cyprus, saying she would continue to campaign for a just and viable solution.

The Rt Hon. Theresa Villiers, MP for Chipping Barnet, told attendees that “despite the recent disappointments I would like to say that I have fought for a reunified Cyprus for 18 years and I will continue to fight for however long it takes.” Ms Villiers reaffirmed her support for the abolition of the Treaty of Guarantee and foreign country intervention rights, as well as a clear time-limit to any Turkish troops that were allowed to remain in Cyprus after a solution.

The next MP to speak was Joan Ryan, MP for Enfield North. Ms Ryan paid tribute to the “huge, vibrant and active British Cypriot community” and added that, “the Cyprus issue would be solved already if it was by Cypriots, for Cypriots.”

Bambos Charalambous MP, the recently elected MP, of Cypriot origin, for Enfield Southgate, said that “Cyprus will have a voice in Parliament and we will all do our best and take every opportunity to promote our cause.” Mr Charalambous called on the British Government to put more pressure on Turkey to end its occupation in Cyprus and that “Turkish troops must leave Cyprus and a system of guarantees is not fit for a modern country.”

Catherine West, MP for Hornsey and Wood Green, called for a “solution by Cypriots, for Cypriots”, paid tribute to some of the most important UK Cypriot community organisations and congratulated Bambos Charalambous on his election as MP for Enfield Southgate.

Bob Stewart MP spoke passionately about his fond memories of growing up in Cyprus as a child. He declared that, “Cyprus is where my heart is, you cannot find a more beautiful country, you cannot have such history in one place… Cyprus is special and needs reunification.” He went to emphasise the need for compromise to find a solution and said, “Turkish troops have no place in Cyprus.”

Jack Dromey MP expressed his disappointment at the collapse of the recent round of negotiations and said, “my commitment to the cause of reuniting Cyprus remains steadfast.”

Roger Godsiff MP told the room how he is “a passionate supporter of a reunited Cyprus and will continue to work for this cause in parliament.”

Caroline Nokes MP reaffirmed her commitment to a reunited Cyprus and said, “I will continue to work towards securing a solution that reunites Cyprus and all its people.”

Speaking at the reception, Jeremy Corbyn, Leader of the Labour Party, reiterated his support for the end of the Turkish occupation, the reunification of Cyprus and the return of refugees to their home. Mr Corbyn said that he will “never stop campaigning for the reunification of Cyprus.” He went on to say that he has a longstanding connection to the Cypriot community through his experience as a Councillor in Haringey at the time of the Turkish invasion where he met many refugees and, as a result, has many good friends in the Cypriot community.

Other distinguished guests in attendance included the Cyprus High Commissioner, Euripides Evriviades; members of the Cyprus High Commission; the Mayors of Lefkoniko and Akanthou; Andreas Papaevripides, President of POMAK (the World Federation of Overseas Cypriots); Harry Charalambous, President of NEPOMAK UK (the youth branch of POMAK); and members of the National Federation of Cypriots’ Executive Committee and Secretariat.

As part of Mr Christodoulides’ visit, he met Emily Thornberry (Shadow Foreign Secretary), Khalid Mahmood MP (Shadow Minister for Europe), and Fabian Hamilton MP (Shadow Minister for Peace and Disarmament). During this meeting, Mr Christodoulides discussed the Cyprus issue and Brexit. Discussing the Labour Party’s policy on Cyprus, the Shadow Ministers said that a mechanism would have to be found that addresses the security concerns of all Cypriots, however this could not be through the current system of guarantees or the presence of foreign troops.

Mr Christodoulides also met with the Liberal Democrat Spokesperson for Brexit, Tom Brake MP. This meeting focussed on the relation between Cyprus and Britain in the context of Britain leaving the European Union. Both parties expressed their strong support for close relations between the two countries post-Brexit.