Overseas Cypriots from across the world meet for 19th World Conference 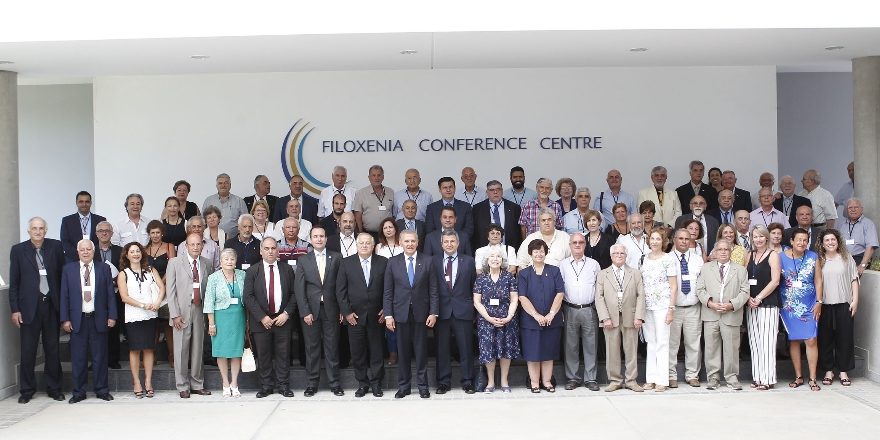 The 19th World Conference of the World Federation of Overseas Cypriots (POMAK) – International Coordinating Committee “Justice for Cyprus” (PSEKA) and the Executive Council Meeting of the World Organisation for Young Overseas Cypriots (NEPOMAK) was held in Nicosia, on 21-24 August 2017. Delegates from the UK were represented by member organisations of the National Federation of Cypriots in the UK.

Opening the Conference, President Anastasiades thanked diaspora Cypriots for their political, social, cultural and philanthropiccontributions to Cyprus and the furthering of bilateral and multilateral relationships with the countries in which they live. He noted that their activities contribute to the promotion of Cyprus as a “centre of stability, collaboration and entrepreneurship”.

Referring to the recent negotiations in Crans Montana he said that “the security of one community cannot consist of a threat to the security of another community”. The President called on diaspora Cypriots to continue advocating for the common goal of Cyprus becoming “a normal state removed from any third-party intervention”. The abolition of the rights of guarantee and intervention along with a timeline for the removal of the occupying troops from Cyprus, he continued, are necessary so that “we can finally feel that we live in a country that belongs to us all and not a country which serves the interests of any third parties.”

The Opening ceremony was also addressed by the Presidential Commissioner for Humanitarian Affairs and Overseas Cypriots Photis Photiou, the Acting President of the House of Representatives Adamos Adamou, a representative of the Archbishop of Cyprus Chrysostomos ΙΙ, and the Deputy Foreign Minister of Greece Terens Quick, as well as the Presidents of POMAK

In his remarks Commissioner Photiou highlighted the significance of recently signed trilateral cooperation agreements and MOUs. The Commissioner gave a special mention to the newly elected British MP of Cypriot descent Bambos Charalambous MP, who was present at the Opening Ceremony. In his address, Deputy Greece FM Quick, reiterated Greece’s longstanding support to Cyprus including in the recent negotiations in Crans Montana and saluted the importance of the trilateral cooperation agreements, stressing the value of widening and deepening these relationships.

During the conference, delegates met with Cypriot Government Ministers as well as the leadership of Cypriot political parties to discuss the latest developments on the Cyprus issue and the path forward.

Commissioner Photiou commended the diaspora, and especially NEPOMAK, for their vigorous commitment to the Cyprus issue and specifically the issue of the missing. On diaspora collaboration, he noted the importance of the strategic partnership with Greece, Israel and the developing relationship with Armenia and welcomed the initiatives in the USA and UK to build relations with the Jewish diaspora.

Mr Photiou was also joined by a representative of the Committee on Missing Persons who delivered a moving briefing on the issue of the missing. He explained that evidence to locate possible burial sites is released at the discretion of organisations who had staff or troops on the ground, including the Red Cross and the UN, however the archives of the Turkish army continue to remain inaccessible for the location of such burial sites. In addition, the Committee shared evidence on the intentional relocation of the remains and the lack of access to military zones in the occupied areas. So far 616 Greek Cypriots and 187 Turkish Cypriots have been identified while the fate of 1200 people declared as missing remains unknown.

In his briefing Minister Kasoulides gave an extensive overview of the Cyprus issue including the recent rounds of negotiations. Specifically, on the issue of security he distinguished between human security, which falls under the jurisdiction of the police, and political security which depends on the implementation of treaties, adherence to the European aquis and the effective operation of the UN Security Council oversight mechanism, stressing that military presence is not necessary for the safeguarding of either.

Minister Georgiades shared perspectives on the recovery of Cyprus’ economy, including the budget surplus since 2014. Responding to a question on the impact of Brexit on Cyprus, he emphasized the importance of thinking of the collective interest of the entire European Union, to find a deal that works best for the EU27 and the UK, that is as close to the current arrangement as possible.

Minister Lakkotrypis briefed the delegates on the growth of the tourism sector, the licencing of a new casino, which is expected to draw more than 300,000 tourists, and the recent drillings in Block 11 of Cyprus’ EEZ by the French conglomerate TOTAL. Answering a question on a possible Israel-Turkey pipeline in the Eastern Mediterranean the Minister stated that the construction of any underwater pipeline will require an intergovernmental agreement that will have to include Cyprus.

A special address was delivered by the Chairman of the Greek Parliament’s Special Permanent Committee on Greeks Abroad Alexandros Triandafyllides who called for “unity amongst the people and political parties”. Mr Triandafyllides stated “for us [Greeks], Cyprus is two words, an apology and a responsibility.”

President of the Cyprus Space Exploration Organisation (CSEO) George Danos delivered an engaging presentation on the work of the CSEO and showed brief videos of the internship experiences of NEPOMAK members. Mr Danos also announced the CSEO’s participation in its first mission to space to divert an asteroid in outer space in cooperation with NASA, the European Space Agency, Italy and Germany.

Delegates also had a roundtable discussion with the British High Commissioner, the Ambassadors of the USA and Israel, as well as the Political Counsellor of the Greek Embassy.

Ambassador Doherty stressed that the US “strongly believes in the Republic of Cyprus’ right to exploit its EEZ” while highlighting that although the US is not at the negotiating table it is always available for support, advice and counsel.

In turn, High Commissioner Kidd spoke of the UK’s involvement in the Crans Montana negotiations. Responding to a question on guarantees and foreign troops, he said that a “military response is not a good way to address all security issues in Cyprus”. Ambassador Ravia-Zadok referred to the historic ties between the Cypriot and Israeli populations and the generosity displayed by Cypriots to Jews in internment camps in Cyprus after WWII. The Israeli Ambassador reiterated the importance of trilateral collaboration between Cyprus, Greece and Israel. The Political Counsellor of the Greek Embassy said that their objective is “for the Eastern Mediterranean to become a sea of prosperity, development and regional cooperation” for all those in the region who wish to embark on this journey. High Commissioner of Cyprus to the UK Euripides L. Evriviades in a display of his longstanding support to the diaspora participated in all the conference sessions including the roundtable discussion.

The Central Councils of POMAK, PSEKA and NEPOMAK had a private meeting with President Anastasiades, at the Presidential Palace, where they received an extensive, confidential briefing on the latest rounds of negotiations.

Following the meeting the President and First Lady, Andrie Anastasides, hosted a reception for conference delegates in the gardens of the Presidential Palace. At the reception, President Anastasiades presented the Medal for Exceptional Contribution to six exceptional diaspora Cypriots whose life’s work has been a continuous active contribution to the Cyprus cause abroad.

The six recipeints were: Greek Cypriot Brotherhood Chairman Tony Yerolemou, Executive Secretary of the National Federation of Cypriots UK Andreas Karaolis, Chairman of the Hellenic American Leadership Council Nikos Mouyiaris, Executive Vice President of Federation of Cypriot American Organisations Tasos Zambas, Chairman of the Cyprus Brotherhood of South Africa Costas Nicolaou, and member of the Executive Council of the Federation of Cypriot Communities of Australia – New Zealand George Lazaris, were awarded this high recognition in honour of their lengthy and dedicated service to their couhttps://cypriotfederation.org.uk/wp-admin/profile.phpntry of birth, Cyprus.

At the end of the conference delegates held elections for the leadership of POMAK and PSEKA. Andreas Papaevripides was re-elected President of POMAK and Philip Christoper was re-elected President of PSEKA. In the resolutions, delegates expressed their ongoing commitment to advocate and further the cause of a reunited Cyprus, in line with UN resolutions and High Level Agreements to end the illegal Turkish invasion and continued occupation.