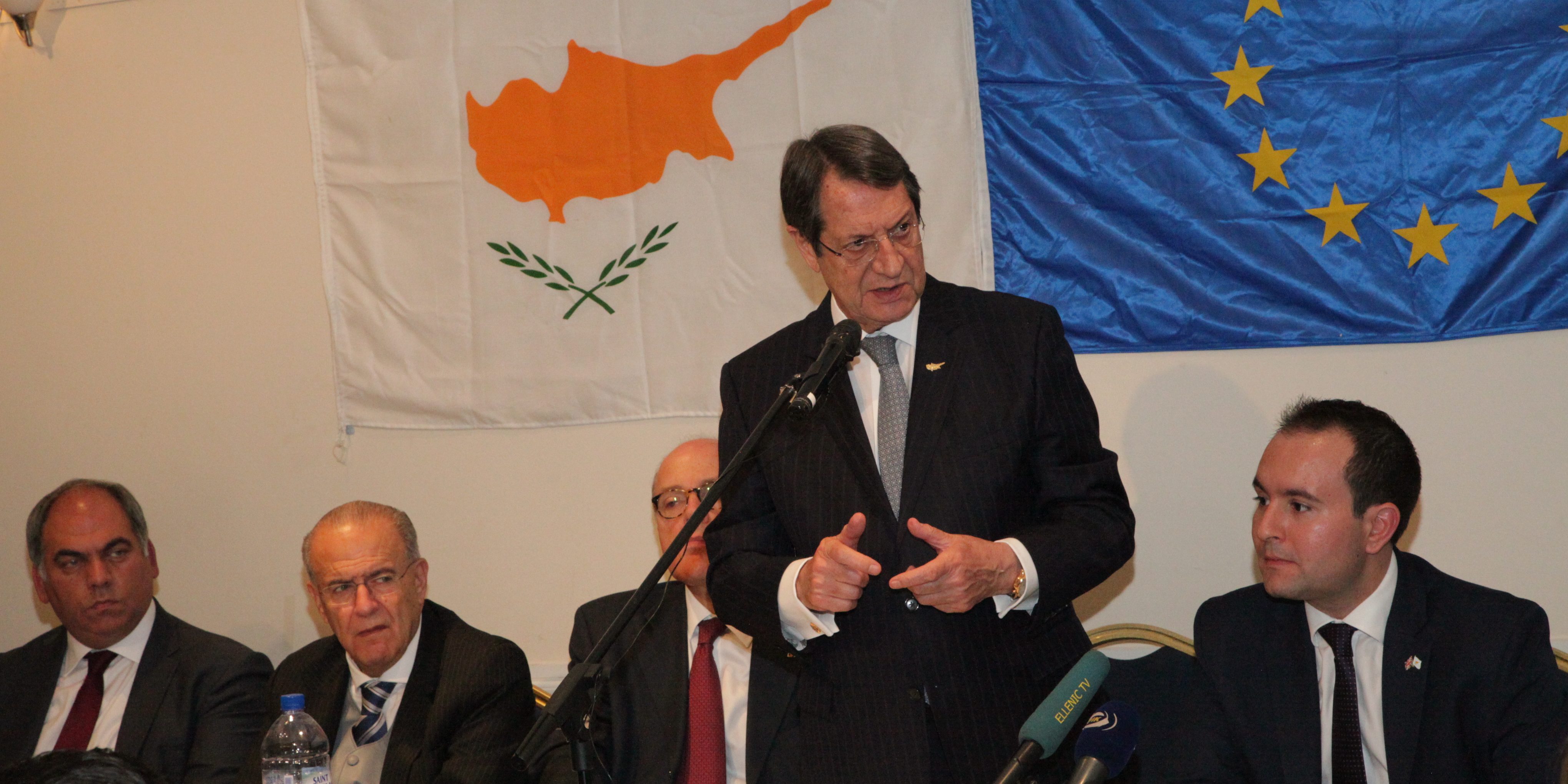 Last night, H.E. the President of the Republic of Cyprus, Nicos Anastasiades, addressed a full house of representatives of the Federation’s member organisations about the latest developments in the Cyprus talks. The President of Cyprus was making his annual visit to London on his way to the United Nations General Assembly in New York.

The President said that he is heading to New York and his meeting with the United Nations Secretary General, Antonio Guterres, “determined” to convey his commitment and willingness to continue working towards the reunification of Cyprus.

Informing community representatives about the latest developments in the talks to reunify Cyprus, the President said that Turkey insisted on maintaining its outdated guarantor (intervention) rights without a sunset clause; the presence of an 1,800 strong military force on the island; and a military base. The President made it clear that these demands by Turkey were unacceptable and would not result in Cyprus being a ‘normal’ country as it should be and has every right to be. He continued and said that, “as long as Turkey continues its obsession with controlling Cyprus, our opposition [to its intransigence] will be even stronger.”

He said that foreign powers have a significant responsibility to ensure that the UN Secretary General’s “first rule” is not violated: “that without an agreement on the security issue there can be no solution of the Cyprus issue and that one party’s security cannot be a threat to the other party.” He was also concerned that any future talks must be adequately prepared for and not allow Turkey the opportunity to hide their intransigence and lack of compromise behind their mere presence at the negotiating table.

The Federation, and the UK Cypriot community, were praised by President Anastasiades for their support, unity and tireless work for Cyprus over the years.
President Anastasiades also paid a warm tribute to the large presence of British-born Cypriots representing NEPOMAK, the World Federation of Young Overseas Cypriots.
Federation President, Christos Karaolis, expressed the support of the UK Cypriot community for the President’s efforts to reunify Cyprus and said that, “the Federation and the community will stand by the government’s side, ready to assist in our collective mission to deliver what all Cypriots want – a free, united Cyprus.” He went on to say that the community will continue to work for a solution “that is in line with UN resolutions, the High-Level Agreements, and EU and international law; that removes Turkish troops from the island, abolishes the anachronistic system of guarantees and respects the human rights of all Cypriots.”

Mr Karaolis paid tribute to the appointment of Mr Photis Photiou as Commissioner to the Presidency for Humanitarian Affairs and Overseas Cypriots as having enhanced the support that the UK Cypriot community receives. Mr Karaolis also noted the presence of a large number of NEPOMAK members and expressed his delight that these, “second-, third-, and fourth- generation Cypriots excel in British political, commercial and academic life, however continue to retain their passion for their roots.”
He also stated that the Federation will also continue to work with the British Government and Opposition political parties, individual parliamentarians, as well as other diaspora communities in the UK to advocate for the interests of our own community and promote the just cause of Cyprus.

Among the distinguished guests at the event were Archbishop Gregorios of Thyateira and Great Britain; the First Lady of Cyprus, Andri Anastasiadou; the Foreign Minister of Cyprus, Ioannis Kasoulides; the Government Spokesperson of Cyprus, Nikos Christodoulides; the High Commissioner for Cyprus and his wife, Mr and Mrs Evriviades; the Ambassador of Greece, Demetrios Caramitsos-Tziras; Bishop Athanasios of Tropaeou; members of the Cyprus High Commission; the Member of Parliament for Finchley and Golders Green, Mike Freer; the Member of Parliament for Enfield Southgate, Bambos Charalambous; the President of POMAK (World Federation of Overseas Cypriots), Andreas Papaevripides; the President of NEPOMAK (World Federation of Young Overseas Cypriots), Antonia Michaelides; the President of the Greek Orthodox Communities, Marios Minaides; former Federation President, Peter Droussiotis;  Councillor Jason Charalambous; and presidents of Federation member associations.