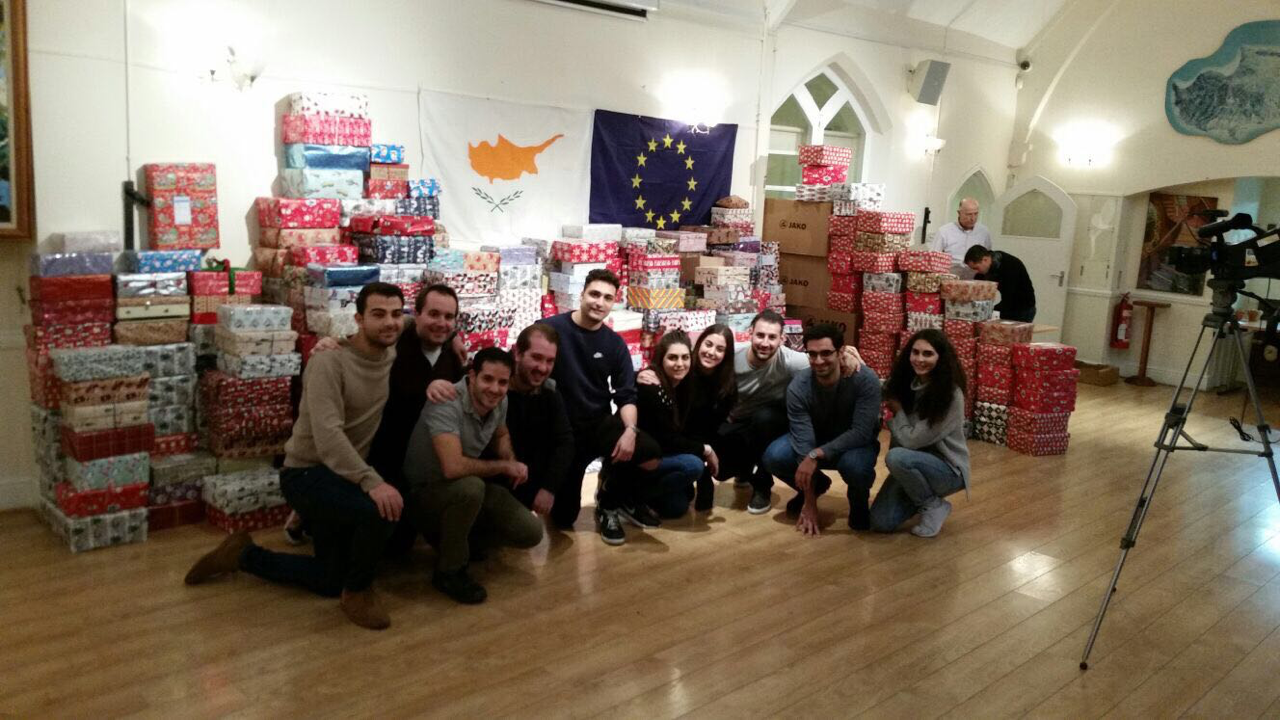 Over the past few weeks, NEPOMAK UK have been running a campaign with the goal of sending Santa Shoeboxes as presents to children in Cyprus this Christmas. On Saturday 15 November, members of NEPOMAK UK visited several community Greek schools to collect shoeboxes filled with gifts that the children and their parents had made and took them to the Cypriot Brotherhood in Finchley. The campaign engaged the Cypriot community across the UK, including community Greek schools in Cardiff, Birmingham, London and Stoke.

Over 700 shoeboxes were collected and presented in front of the cameras of Doros Partasides (RIK) and Hellenic TV. Members of NEPOMAK UK were also interviewed discussing how this campaign was organised and the significance each box has to its recipient. The shoeboxes are now on their way to Cyprus thanks to the generous support of Mondial Forwarding and should arrive sometime next week. We will update the community on their progress when they reach the children and we hope to also have some pictures of the children with their presents.

NEPOMAK UK’s Secretary and Santa Shoebox Campaign coordinator, Mary Savvides, thanked everyone who contributed and made the campaign a success and said, “It’s inspiring to see communities from across the UK work with NEPOMAK to help make all these Santa Shoeboxes for children in Cyprus. I hope we have helped make their Christmas a little bit more special. I’d like to thank everyone who participated, and I wish you all a Merry Christmas!”

NEPOMAK UK President, Harry Charalambous, who had driven to and from Birmingham collecting shoeboxes on Saturday said, “it has been a delight to see the community come together to help us with this campaign and I’m very proud of our committee for leading it.”

The majority of the shoeboxes that NEPOMAK UK collected are on their way to underprivileged primary schools in Nicosia. Many of the pupils on these schools rely heavily on free school meals and state support to get through their education. These schools also have a high number of refugee children who been through difficult times, and in some cases lost everything they have, we hope these children can find Cyprus to be a welcoming and fulfilling place to grow up.

NEPOMAK UK also sent shoeboxes to the 45 school children in the enclaved town of Rizokarpasso, these children range in age from 3-17 years old. Tony Kleanthous, Chairman of Barnet FC, kindly donated sportswear, footballs and match programmes as gifts to each of the 45 children enrolled in the school.

Some of the shoeboxes will be sent to Paidiatriki Kliniki tou Makariou Nosokomeiou which is a children’s hospital in Nicosia. Many of the children will, unfortunately, be in hospital over the Christmas period and we hope the presents will remind them that they are not alone at this special time of the year.

NEPOMAK UK is the UK branch of NEPOMAK, the World Organisation for Young Overseas Cypriots. NEPOMAK is a voluntary, not-for-profit organisation run by young Cypriots and is dedicated to their needs by running a number of cultural, educational, social, networking, charitable and activist initiatives. NEPOMAK is always looking for new volunteers in the UK and worldwide to support its fantastic cause. For more information on NEPOMAK or to get involved, please visit our website (www.nepomak.org/uk) and search for us and follow us on social media.