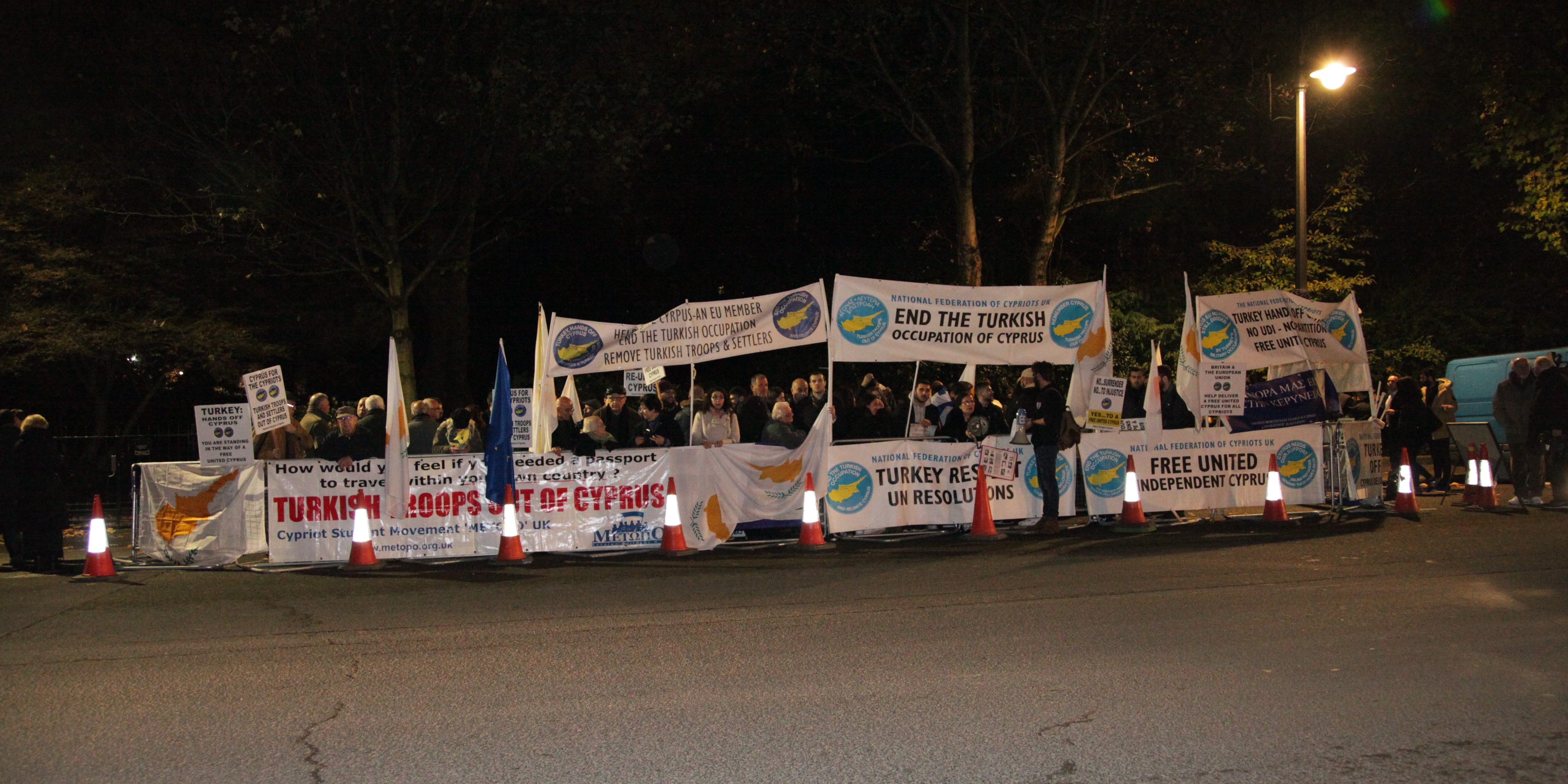 For the 34th consecutive year, UK Cypriots have called for the reversal of the illegal ‘Unilateral Declaration of Independence (UDI)’ and demonstrated their support for a free, united Cyprus outside the Turkish Embassy in London. The illegal UDI in 1983 was strongly condemned by United Nations Security Council resolutions 541 (1983) and 550 (1984), and also by the then British Prime Minister, Margaret Thatcher. The UDI has not been recognised by any country in the world other than Turkey.

Letter Delivered to the Ambassador of Turkey
The President of the National Federation of Cypriots in the UK, Christos Karaolis; Officers of the Federation; the President of POMAK, Andreas Papaevripides; the President of NEPOMAK, Antonia Michaelides; and the President of EFEK (Union of Cypriot Students in the UK), Nikolas Spyrou, delivered a letter to the Ambassador of Turkey. The letter called on Turkey to “act immediately in the interest of justice and human rights and to increase all efforts towards delivering a reunified Cyprus where the human rights and fundamental freedoms of all Cypriots will be safeguarded.” It called on Turkey to accept that Cyprus should be a ‘normal’, modern, truly independent and sovereign, European state and not a protectorate of Turkey through an outdated and unworkable security system. The anachronistic system of guarantees – that failed Cyprus so badly in the past – has no place in a ‘normal state’; and the Turkish army – who have occupied 37% of the island for 43 years – should have no presence in a ‘normal state’.

Letter to the UK Prime Minister
On this significant and tragic anniversary, the President of the National Federation of Cypriots in the UK, also took the opportunity to write to the Prime Minister, Theresa May. The letter outlined Turkey’s recent illegal unilateral actions in the occupied area of Cyprus and said that they “indicate an alarming policy” and undermine efforts to reunify the island. He went on to say that, “it is imperative that our Government takes an active role to reinforce to Turkey that actions designed to hinder the prospects of continuing the efforts for a comprehensive settlement of the Cyprus issue should cease, and make clear that the only way for a functional and viable solution is a reunified country without any intervention rights or the permanent presence of foreign troops.” The President of the Federation concluded the letter by calling on the Prime Minister to take this opportunity to “make a lasting difference for Cyprus and all its people.”

The Demonstration
At the demonstration, Christos Karaolis said that “Turkey should overturn its legacy of occupation in Cyprus and contribute positively towards a reunified island that will be beneficial for all Cypriots.” Mr Karaolis described it as “unacceptable” that Cyprus, a European country, is under foreign military occupation. Reflecting on the situation in the wider region, Mr Karaolis said that a free, united Cyprus would “offer a beacon of hope for both Christians and Muslims alike to live peacefully together in a part of the world which has become unaccustomed to such a reality.”

UK Cypriots and students travelled from across London and from as far as Newcastle, Bristol, Leicester and Essex to show their support for a free, united Cyprus.

During the demonstration in London, the UK Cypriot community called on Turkey to: