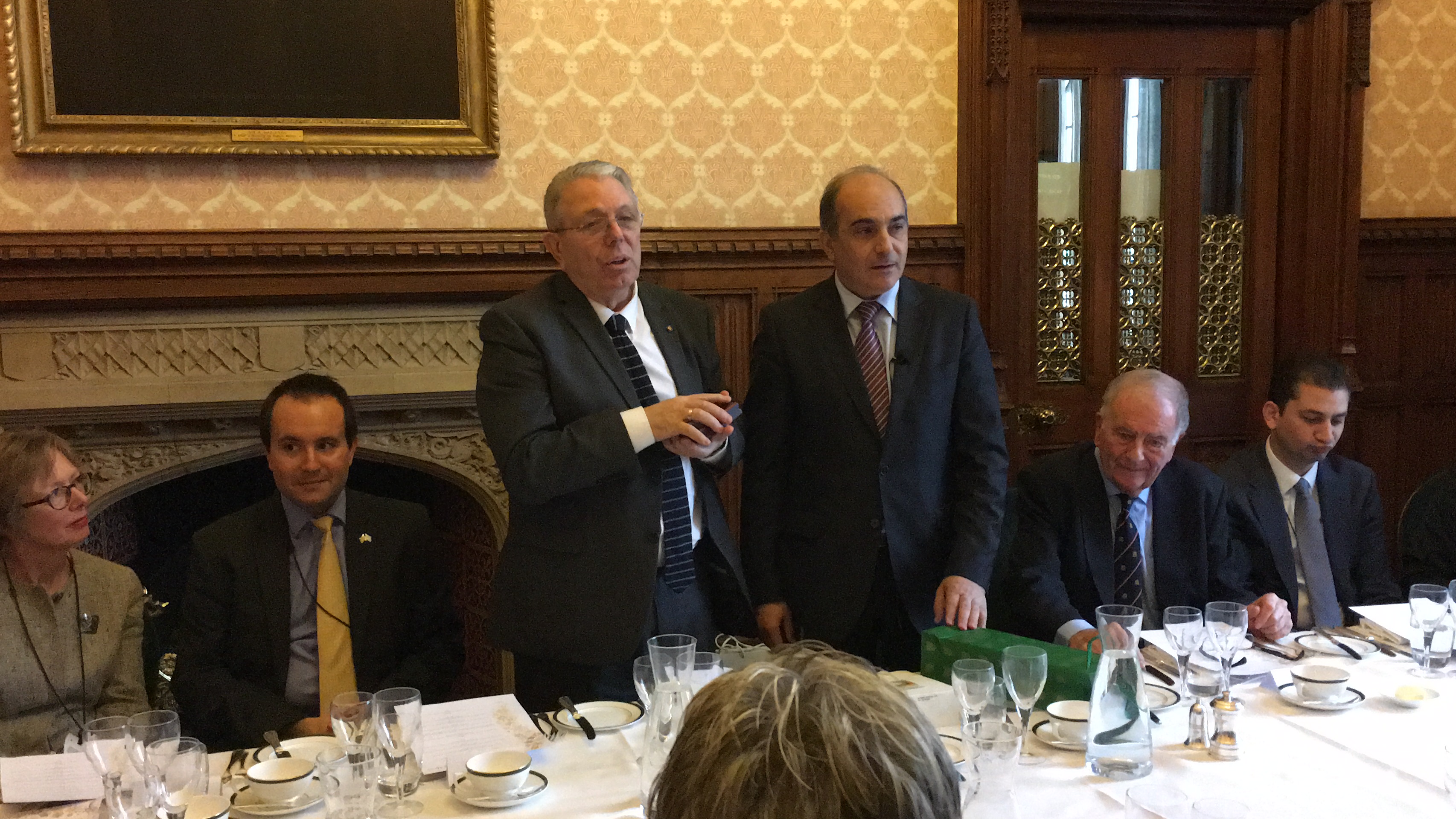 On Tuesday 5th December, the All-Party Parliamentary Group (APPG) for Cyprus met with the President of the House of Representatives as part of his working visit to the UK. The APPG for Cyprus lunch was hosted by the National Federation of Cypriots in the UK. Mr Syllouris and members of the APPG for Cyprus held an in-depth and productive discussion on wide range of timely issues including Brexit, Parliamentary relations between Cyprus and Britain, the Commonwealth, and the Cyprus issue.

Sir Roger Gale MP, Chair of the APPG for Cyprus, welcomed the President of the House of Representatives by commenting on the timeliness of his visit, given the expected developments on Brexit, and reassured Mr Syllouris that “the APPG for Cyprus will continue to support the reunification of Cyprus following the collapse of the Crans Montana negotiations”. Sir Roger also took the opportunity to congratulate Stella Kyriakides on her election as President of the Parliamentary Assembly of the Council of Europe – the first Cypriot elected to this position.

In his remarks, Mr Syllouris said, “I welcome the contribution and support that the All-Party Parliamentary Group has offered towards Cyprus, not just on the Cyprus issue, but also on increasing collaboration between our two countries, especially post-Brexit. Despite the disappointing outcome of the Crans Montana negotiations, I remain hopeful that we will re-start negotiations after the Presidential Elections.”

Mr Syllouris went on to present former MP Sir Alan Meale with the Medal of Honour of the House of Representatives of the Republic of Cyprus. The Medal is the highest honour that the Cypriot Parliament can award and was given to Sir Alan Meale for his exceptional and longstanding contribution to Cyprus.

Upon receiving the award, Sir Alan said that it had been “an honour and a pleasure to be able to help Cyprus” and he expressed his hope that all in the room would “work twice as hard to ensure that Cyprus is fully free, united, and independent.” He also spoke about how the special relationship between Cyprus and the UK would continue despite varying opinions on Britain’s relationship with the European Union post-Brexit.

The Secretariat of the National Federation of Cypriots in the UK hosted a working dinner in honour of the President of the House of Representatives on Tuesday 5 December. Mr Syllouris exchanged views with members of the Federation’s Secretariat on a range of issues including the Commonwealth, UK-Cyprus relations post-Brexit, and the role of the diaspora.

During his welcome address, Federation President, Christos Karaolis, said “It is an honour to welcome the President of the House of the Representatives to London. Over many years, he has been a strong advocate and supporter of our community here in the UK”. Mr Karaolis went on to say that the “Federation will continue working with H.M. Government and all political parties to deliver for a Free United Cyprus.”

Following the speeches, Members of the Federation’s Secretariat had the opportunity to exchange views with Mr Syllouris on a wide range of issues.

As part of his visit, Mr Syllouris met with the First Secretary of State, Rt Hon Damien Green MP. The issues they discussed were Cyprus-UK relations, the Commonwealth, and Brexit.

Among several other meetings, Mr Syllouris met with the Speaker of the House of Commons, Rt Hon John Bercow MP and the Senior Deputy Lord Speaker, the Rt Hon Lord McFall of Ascuith.