Nicos Anastasiades re-elected President of the Republic of Cyprus 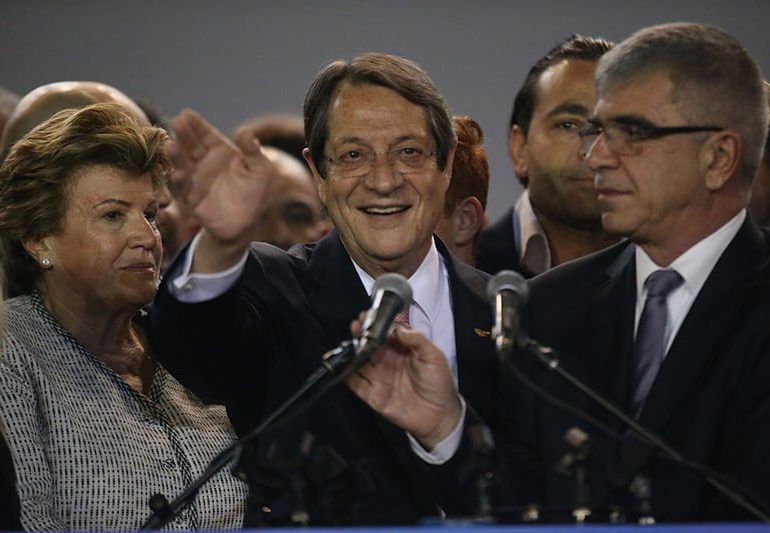 Mr Nicos Anastasiades was re-elected President of the Republic of Cyprus, this evening, following the second round of the Presidential Election. Mr Anastasiades won with 56% of the votes against independent candidate Mr Stavros Malas who won 44% of the votes.

Speaking after the result was announced, the President of the National Federation of Cypriots in the UK, Mr Christos Karaolis, said on behalf of the Federation that, “the people of Cyprus have voted in a free and fair election and have chosen Mr Anastasiades to serve as President for the next 5 years. The Federation will unite behind Mr Anastasiades and work very closely with him to achieve our common aims of a free, united Cyprus; the end of Turkish occupation; the right of return of refugees; the determination of the fate of the missing person; and to improve the lives of all Cypriots. We also look forward to welcoming him to London in the coming months to, once again, visit the UK Cypriot community.

Mr Anastasiades has made it his priority to return to negotiations as soon as possible in order to reunify the island of Cyprus with a just and viable solution that is based on the United Nations Secretary General’s framework, and that is in line with relevant United Nations Security Council Resolutions and High-Level Agreements. The reunification of Cyprus will bring peace and prosperity to Greek, Turkish, Maronite, Armenian and Latin Cypriots and have major benefits for the entire island.

In his acceptance speech, President Anastasiades thanked all Cypriots who participated in the election, whether they voted for him or not, saying that “tonight there no winners and losers. From tomorrow, we must all unite to address the economic and social problems faced by Cypriots, young and old”. He went on to say that “above all, we must continue, united, to address the problem of occupation that our country faces. We need a solution that does not disregard the concerns of the Greek Cypriots or the sensitivities of Turkish Cypriots.

The new Government of the Republic of Cyprus, led by Mr Anastasiades, will take office on 1 March 2018.