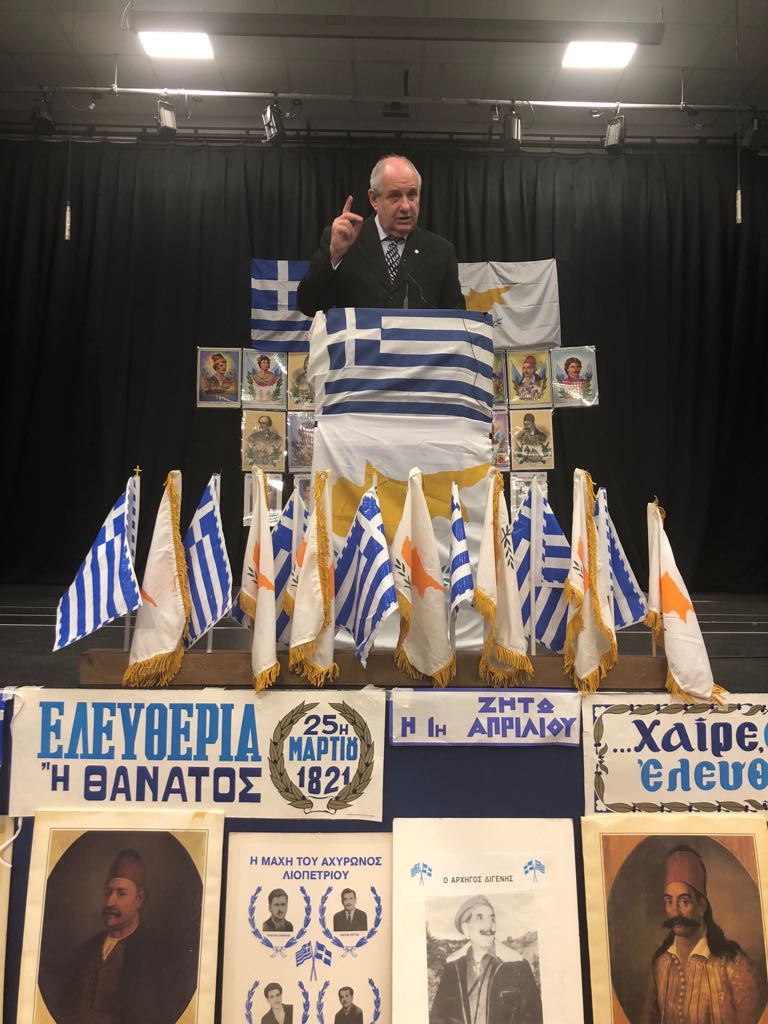 On Sunday the 25th of March, the National Federation of Cypriots in the UK organised a community-wide celebration to mark the national day celebrations of 25 March 1821 and 1 April 1955 at Ashmole Academy in North London.

The guest speaker was the Deputy Foreign Minister of Greece, responsible for Greeks Abroad, Mr Terens Nikolaos Quick. Speeches were also given by the President of the National Federation of Cypriots in the UK, Christos Karaolis; the Ambassador of Greece to the UK, Demetrios Caramitsos-Tziras; the High Commissioner for the Republic of Cyprus to the UK, Euripides Evriviades; the President of the Greek Orthodox Communities in the UK, Marios Minaides; and the representative of the Archbishop of Thyateira and Great Britain, Bishop of Tropaeou Athanasios.

The Deputy Foreign Minister of Greece, stressed that Greece’s position on the Cyprus issue is clear – that occupying troops must withdraw and that Cyprus cannot be subject to an anachronistic system of guarantees. Mr Quick said that these are the two inalienable conditions that Greece has for the Cyprus issue, and among other things he said:

“The 25th of March and 1st of April are historical events that in the end, led to freedom. Amongst many other factors that led to their success, was the international presence of Hellenes who took advantage of the dominant tendencies of the European communities and managed to persuade them to support Hellenism in its pursue for freedom.

“Almost 200 years since the Greek Revolution, and after 400 years of enslavement – keeping in mind both the ups and downs of this journey, but most importantly our faith in a free Greece which are evident by our participation and role in the two World Wars, the Balkan wars – we are now opening up to new challenges. I would like to emphasise the collaboration of the diaspora of nations and specifically of the youth within the diasporas, since they will define our future.”

The President of the National Federation of Cypriots in the UK welcomed and thanked the Deputy Foreign Minister of Greece for his presence to celebrate 25 March 1821 and 1 April 1955 and said:

“This year’s national day celebrations find Cyprus and Greece facing tensions. In our small country, the Turkish Cypriot leader Mustafa Akinci, instead of supporting the interests of our Turkish Cypriot compatriots, is held hostage by the orders of President Erdogan of Turkey, who continues to threaten Cyprus, Greece and the European Union.

“Our community, coordinated by the National Federation of Cypriots in the UK, sent thousands of emails in less than two weeks to the British Foreign Office about Turkey’s actions in Cyprus’ EEZ. The Foreign Office confirmed that it “wanted to see exploration go ahead”. The Labour Party as well as Conservative and Labour MPs condemned Turkey’s actions, proving that together, united we can achieve more. I urge you all to show our strength by voting for Cypriot candidates in the local elections on the 3rd of May.”

The Ambassador of Greece, Demetrios Caramitsos-Tziras, in his greeting said that the presence of the Deputy Foreign Minister at the celebrations demonstrates the importance that the Greek Government attaches to the contact with the diaspora and the interest that exists towards the continuation of the dynamic presence of the community in the UK.

The High Commissioner of the Republic of Cyprus, Euripides Evriviades, said in his speech:

“The heroes of ’21 and ’55-’59 live on in today’s Greek, Cypriot and global world. Not only because the history of their lives and their deaths remain in the memory of the generations that followed and will follow, but above all because they are a beacon of loyalty and devotion to the fundamental ideals and values ​​inherent in the real meaning of Hellenism: self-sacrifice, self-denial, selflessness, heroism.

“I must mention the enormous success of our compatriot, Andria Zafirakou, who was named the best teacher in the world when she won the Global Teacher Prize out of 30,000 nominees from 173 countries.

The President of the Greek Orthodox Communities in the UK, Marios Minaides, in his brief greeting paid tribute to the heroes of the national liberation struggles of Greece and Cyprus and said that in these difficult times we need to learn from the “bravery, self-sacrifice, unity, and selflessness” of those heroes.

The Bishop of Tropaeou Athanasios, conveyed blessings and heartfelt greetings from the Archbishop of Thyateira and Great Britain, Gregorios, and urged the diaspora to continue studying and learning from the spirit of the struggles of 1821 and 1955.

The programme was enriched with songs, poems, plays, and dances by children from community Greek schools. The community Greek schools that performed were: Hazelwood Greek School (OESEKA), the Cyprus Educational Mission (KEA), the Independent Greek Schools of Manor Hill and Finchley (AESL), the Greek Nursery & Primary School of London, the theatrical group of KEA, the Greek Secondary School of London, the Independent Greek School of St Mary (AESA), St. Demetrios Greek School. There were also psalms performed by the Archbishopric School of Byzantine Music, conducted by Dimitris Skrekas.

In attendance were representatives from the Greek Embassy and the Cyprus High Commission, the President of POMAK Andreas Papaevripides, the Vice-President of NEPOMAK UK Christos Tuton, presidents of the UK Branches of Cypriot political parties, presidents of associations and organisations, presidents of educational organisations such as KEA, OESEKA, AESA, AESL, Head Teachers and teachers of the Greek Schools of the community as well as many Greeks and Cypriot who live in the United Kingdom.

The programme was presented by Andreas Karaolis, Executive Secretary of the National Federation of Cypriots in the UK, and Anna Antoniou, a teacher-member of KEA. Susie Constantinides was responsible for the coordination of the programme whilst the Head of KEA, Maria Papalouka was responsible for coordinating the performances. Technical support and the coordination of music on the day was led brilliantly by Nakis Merkis. He had the support of the Chair of Ashmole Greek School, Antri Andreou; Andrea Louka; Christos Tuton; Adrian Patsalos; Zoe Merki; and Nephytos Merkis in preparing the venue and stage prior and during the show.