A Celebration of Cypriot and Jewish Communities in the Commonwealth 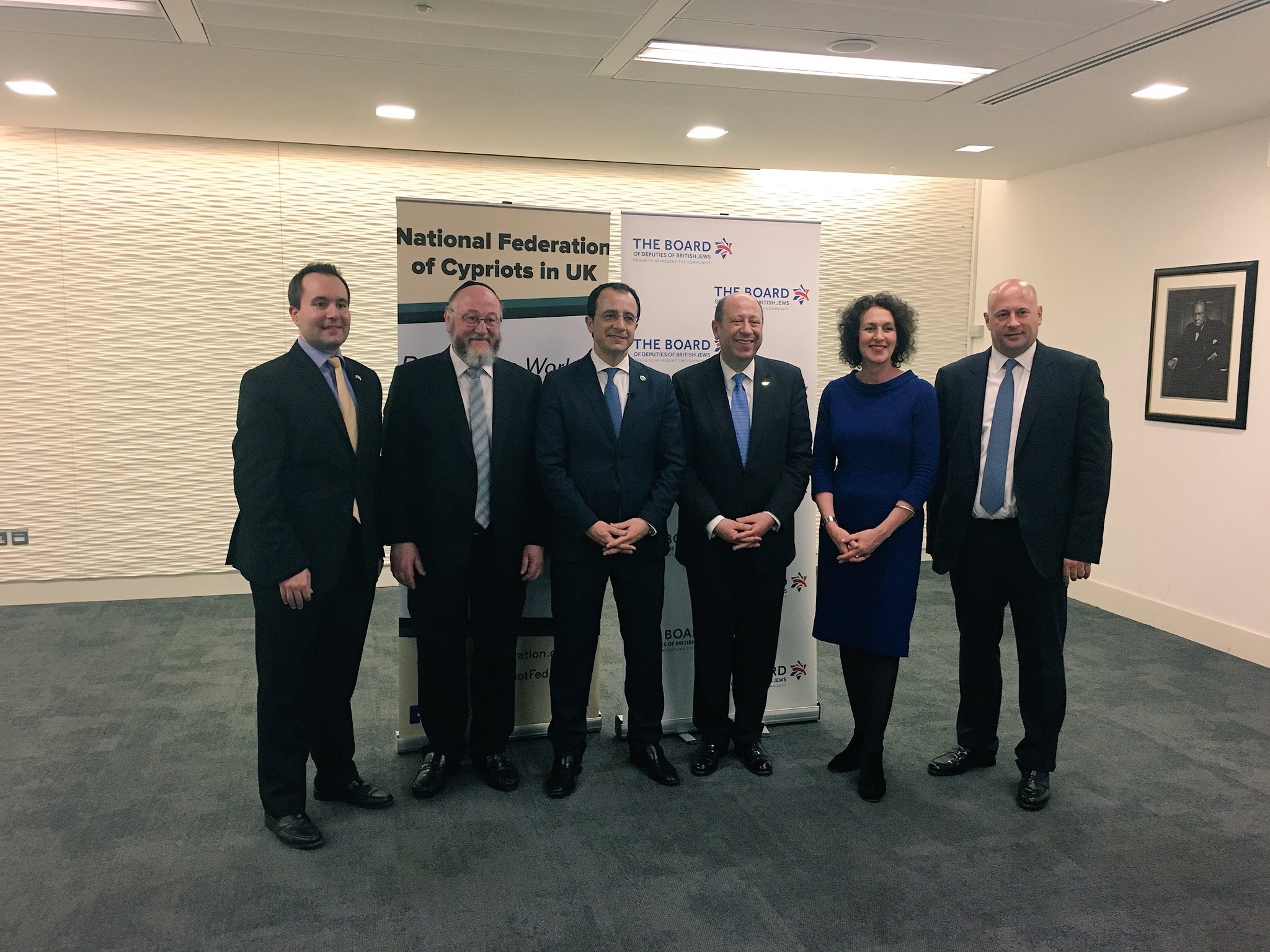 The close collaboration between the Cypriot and Jewish community was highlighted on Tuesday evening at an event organised by the National Federation of Cypriots in the UK, The Board of Deputies of British Jews, and the Commonwealth Jewish Council. The event was held in the presence of special guests, Nikos Christodoulides (Minister of Foreign Affairs of the Republic of Cyprus) and Chief Rabbi Ephraim Mirvis of the United Hebrew Congregations of the Commonwealth.

The event, hosted at Europe House, brought together representatives from the UK’s Cypriot and Jewish communities and showcased the bonds of cooperation that exist between the two communities in the UK and in the Commonwealth.

The Minister of Foreign Affairs of Cyprus, said in his speech that the relationship between Cypriots and Jews had “shined bright even in the darkest of times.” Mr Christodoulides went on to say that in the present day we have taken the historical and cultural affinity between our people to the level of strategic cooperation between Cyprus and Israel.”

Mr Christodoulides also told the story of how Cypriots demonstrated solidarity towards the Jews that were interned in Cyprus by Britain between 1947-49. He said that for around 53,000 Jews, Cyprus was “the final frontier on a journey to the Promised Land, a port of call but also confinement during their exodus from the concentration camps to a free and better life. The human stories of how they were embraced by Cypriots, offered shelter in every sense of the word, are truly touching. More 2200 children were born in camps in Cyprus and till this day many of them return – and are welcomed – to their place of birth. The solidarity exhibited by the Cypriots towards Jewish refugees, played its small part in contributing to many refugees’ restoration of their shattered belief in fundamental human dignity and good.”

The Foreign Minister concluded by emphasising the strength that both peoples had shown in their darkest of times. He highlighted the perseverance of Jewish survivors of the Holocaust to build new lives in Israel and of Cypriots to build new lives following the illegal Turkish invasion of Cyprus in 1974.

The Chief Rabbi Ephraim Mirvis of the United Hebrew Congregations of the Commonwealth highlighted some lesser-known examples of Cypriot and Jewish closeness throughout history and pointed towards the unique blessing of Cypriot wine in Judaism as an example of the special relationship between the two peoples. The Chief Rabbi went on to say that the links between Jews and Cypriots “promote unity, peace and cooperation.”

On behalf of the National Federation of Cypriots in the UK its President Christos Karaolis praised the longstanding collaboration between the Cypriot and Jewish people. He said “Our respective UK-based diasporas are equally sized, about 300,000 each, reside in broadly the same areas across North and East London and the issues that concern our communities are the same. By strengthening and formalising the already existing bonds of friendship between our two communities the sum of the influence and indeed the success of our collective efforts will be greater than either one of us alone.” Mr Karaolis congratulated the Foreign Minister of the Republic of Cyprus, Mr Nikos Christodoulides, on his recent appointment and thanked him for his longstanding friendship and support for the Cypriot diaspora globally and in the UK.

The Chief Executive of the Board of Deputies of British Jews, Gillian Merron began her speech by thanking the Foreign Minister of Cyprus for visiting Israel already in his short time since taking office at the beginning of March. She also expressed her gratitude that Cyprus and Israel have demonstrated how committed they are to developing an even stronger strategic relationship in the Eastern Mediterranean. Ms Merron said that the event is “a celebration of the immense contribution that the Jewish and Cypriot communities had in the UK and in the Commonwealth.”

Speaking on behalf of the Commonwealth Jewish Council, Lord John Mendelsohn also made introductory remarks. Lord Mendelsohn thanked the organisers and paid tribute to the close relationship of the two communities in the UK. He also took the opportunity to express his appreciation at the outstanding work of the High Commissioner for the Republic of Cyprus to the UK in promoting the interests of Cyprus as well building ever closer relations between Cyprus and Israel.