Cyprus EEZ: Letter from Minister for Europe to Federation 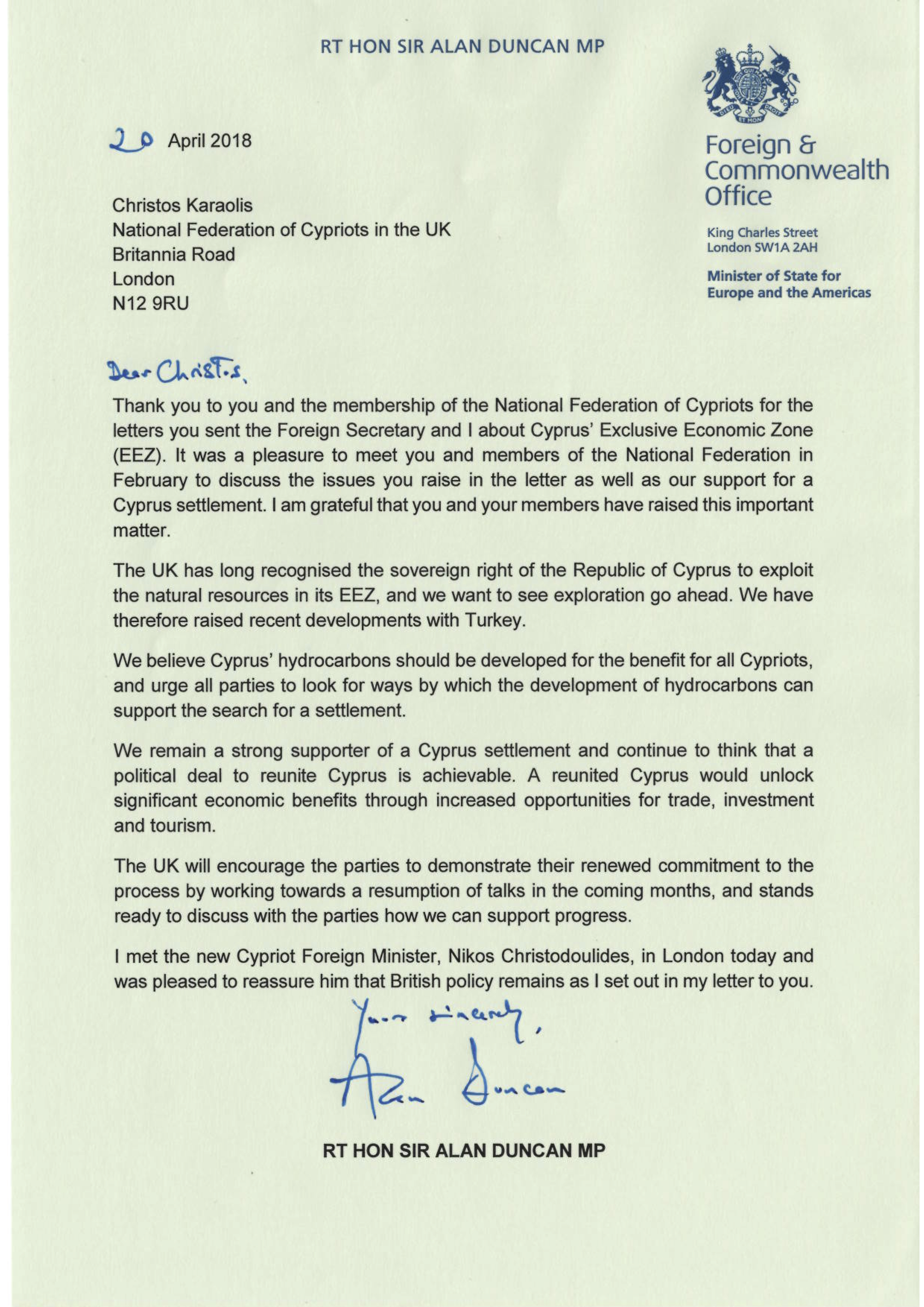 On Wednesday 25 April 2018, the President of the National Federation of Cypriots in the UK, Christos Karaolis, received a letter from the Minister for Europe, Sir Alan Duncan MP. The letter was in response to the campaign by the Federation and UK Cypriot community’s campaign about Turkey’s violations in the Republic of Cyprus’ Exclusive Economic Zone (EEZ), in which around 3000 emails/letters were sent to the Foreign Office in two weeks.

Speaking after receiving the letter, Mr Karaolis said, “I’m grateful to the Minister for meeting with a delegation from the Federation in February and listening to our community on the crucial issue of Cyprus’ rights in its EEZ. I’d also like to express my thanks to those who sent emails and letters to the FCO and made our community’s voice heard loud and clear.”

The letter reads as follows:

Thank you to you and the membership of the National Federation of Cypriots for the letters you sent the Foreign Secretary and I about Cyprus’ Exclusive Economic Zone (EEZ). It was a pleasure to meet you and members of the National Federation in February to discuss the issues you raise in the letter as well as our support for a Cyprus settlement. I am grateful that you and your members have raised this important matter.

The UK has long recognised the sovereign right of the Republic of Cyprus to exploit the natural resources in its EEZ, and we want to see exploration go ahead. We have therefore raised recent developments with Turkey.

We believe that Cyprus’ hydrocarbons should be developed for the benefit of all Cypriots, and urge all parties to look for ways by which the development of hydrocarbons can support the search for a settlement.

We remain a strong support of a Cyprus settlement and continue to think that a political deal to reunite Cyprus is achievable. A reunited Cyprus would unlock significant economic benefits through increased opportunities for trade, investment and tourism.

The UK will encourage the parties to demonstrate their renewed commitment to the process by working towards a resumption of talks in the coming months, and stands ready to discuss with the parties how we can support progress.

I met the new Cypriot Foreign Minister, Nikos Christodoulides, in London today and was pleased to reassure him that British policy remains as I set out in my letter to you.