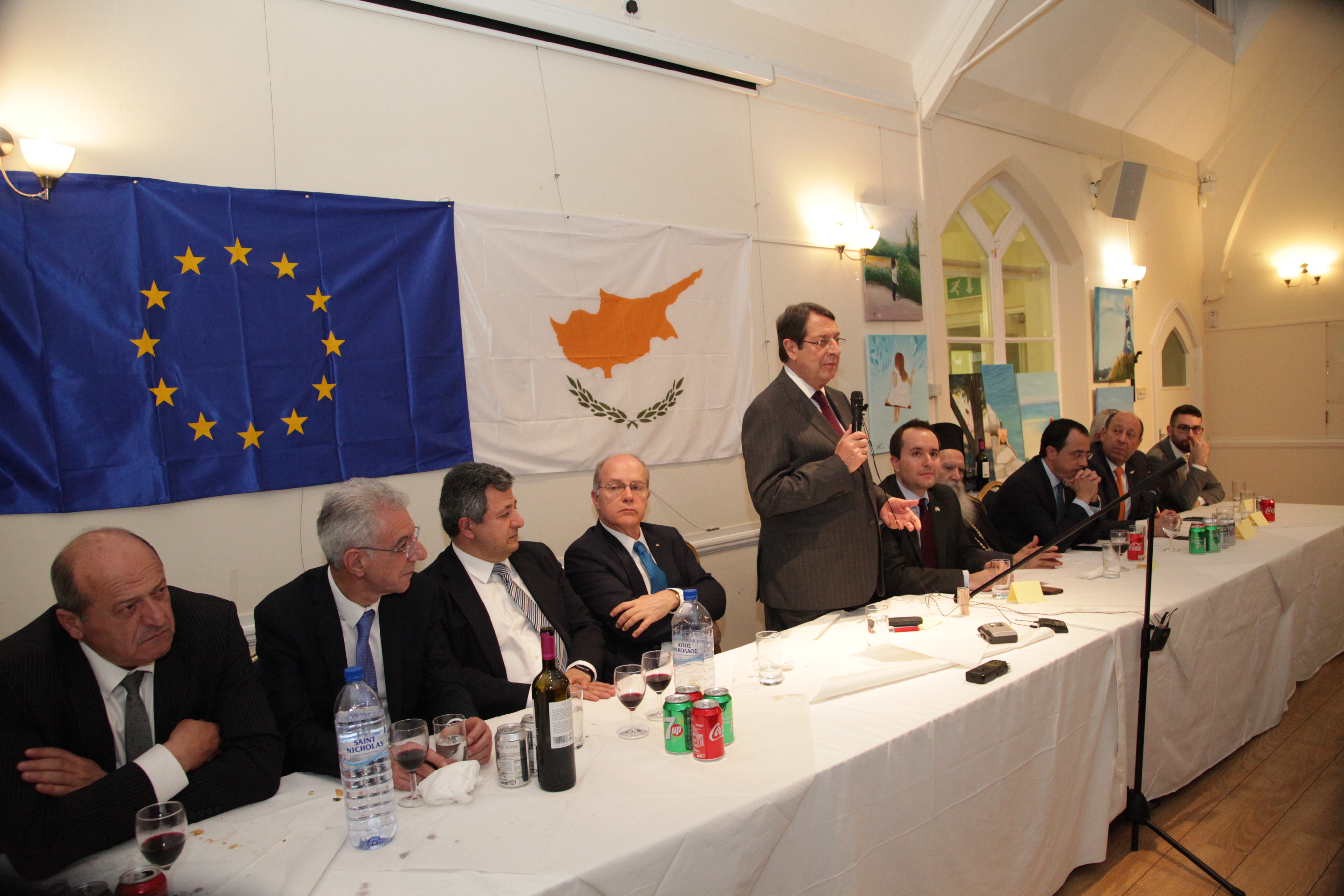 On Friday 20 April, H.E. the President of the Republic of Cyprus, Nicos Anastasiades, addressed a full house of representatives of the Federation’s member organisations, at the conclusion of his visit to London for the Commonwealth Heads of Government meeting.

Speaking to a full house, the President praised the work of the UK Cypriot diaspora saying “I’m moved and pleased to, once again be among the people who, for years, have been keeping the Cyprus issue alive, despite the challenges and without personal ambition. And this is very important for Cyprus because it is through these actions and interventions, that there is often a decisive difference in British foreign policy.”

The President warmly praised the strong presence of younger Cypriots, from NEPOMAK UK, and said he was pleased to see so many new faces from the Federation’s Member Associations. He said that he felt proud to be amongst “distinguished guests” from the Cypriot diaspora from the fields of business, science, education and many other fields. He went on to make special reference to the presence of Archbishop Gregorios, who this week celebrates 30 years since his enthronement and also Andria Zafirakou who recently beat 30,000 teachers to be awarded the Varkey Foundation, Global Teacher Prize. He also praised the success of the Cypriot team in the recent Commonwealth Games, which was ranked 10th out of 73 countries. He said “This is something that shows that despite our small size, we have the tools, the people and the values ​​to promote Cyprus.”

The President went on to say that the excellent relations that Cyprus maintains with Europe, USA, UK, the Middle East, Arabic states, Russia and elsewhere are part of a successful multidimensional foreign policy, as shown by the international condemnation of Turkey’s unlawful actions against Cyprus, for example in the Joint Communiqué of the leaders of its Member States Commonwealth.

Federation President, Christos Karaolis, expressed the support of the UK Cypriot community for the President’s efforts to reunify Cyprus and said that, “the Federation and the community will stand by the government’s side, ready to assist in our collective mission to deliver what all Cypriots want – a free, united Cyprus.” He said that the community will continue to work for a solution “that is in line with UN resolutions, the High-Level Agreements, and EU and international law; that removes Turkish troops from the island, abolishes the anachronistic system of guarantees and respects the human rights of all Cypriots.”

Mr Karaolis went onto praise the success of the cross-party and cross-community unity that exists under the Federation’s umbrella, highlighting the recent campaign over Turkey’s illegal actions in Cyprus’ EEZ in which nearly 3,000 emails/letters were sent to the Foreign & Commonwealth Office. In addition statements were received from the Government, Labour Party, as well as MPs from the Conservative, Labour and Liberal Democrat parties. He went on to say that the Federation will continue to work with the British Government and Opposition political parties, individual parliamentarians, as well as other diaspora communities in the UK to advocate for the interests of our own community and promote the just cause of Cyprus.

Mr Karaolis also praised the diversity, achievements and successes of the modern UK Cypriot diaspora. He went on to extend a special welcome to some of the prominent UK Cypriots present, including: Archbishop Gregorios, Andria Zafirakou, Len Lazari, Constantin Cotzias, Katerina Mina and the Very Reverend Protopresbyter George Zafirakos. In closing, Mr Karaolis urged the community to once again make its voice heard in the local elections on 3rd May by supporting and voting for all Cypriot candidates, irrespective of political party.

Among the distinguished guests at the event were Archbishop Gregorios of Thyateira and Great Britain; the Foreign Minister of Cyprus, Nikos Christodoulides; the Government Spokesperson of Cyprus, Prodromos Prodromou; the High Commissioner for Cyprus Mr Evriviades; the Ambassador of Greece, Demetrios Caramitsos-Tziras; members of the Cyprus High Commission; the President of POMAK (World Federation of Overseas Cypriots), Andreas Papaevripides; the President of NEPOMAK UK (the UK Branch of the World Federation of Young Overseas Cypriots), Harry Charalambous; former Federation President, Peter Droussiotis;  Councillor Jason Charalambous; and Presidents and Committee Members of Federation member associations.