What does Brexit mean for the UK Cypriot community? 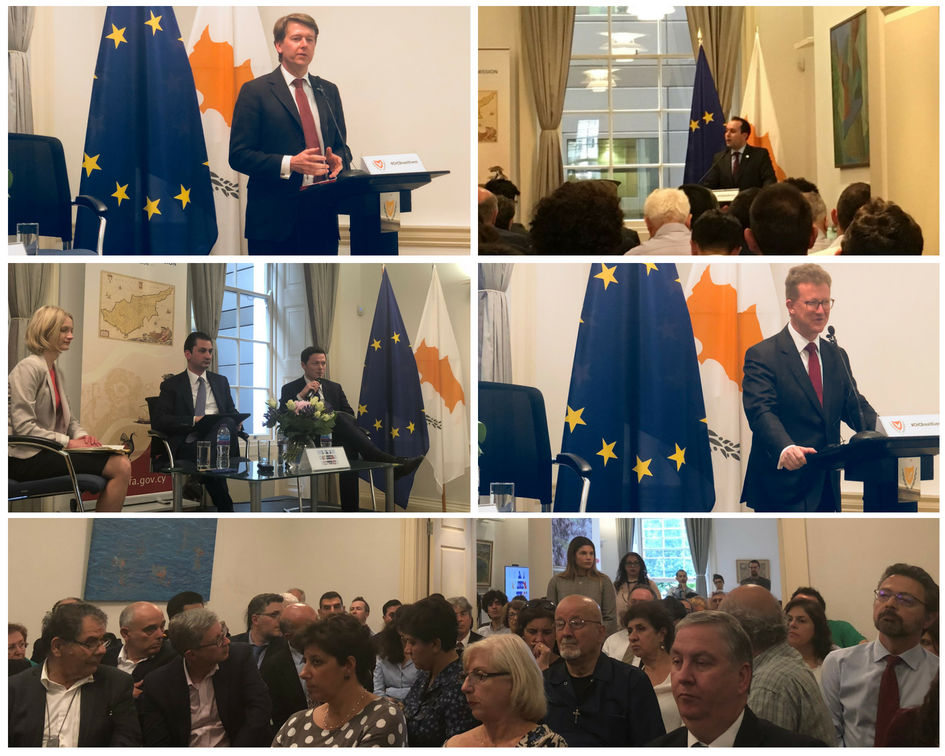 The High Commission of the Republic of Cyprus in the UK hosted an information evening about EU citizens’ rights after Brexit on Monday 18 June, in cooperation with the UK Government and with a particular focus on Cypriots in the UK. Robin Walker MP, Parliamentary Under-Secretary of State at the Department for Exiting the European Union (DEXEU), as well as officials from the Home Office and DEXEU, spoke to the UK Cypriot community in detail about the implications of Brexit and answered specific questions that students from Cyprus and UK Cypriots without British passports had about their rights. British-born Cypriots also had the opportunity to ask question about acquiring Cypriot citizenship in order to safeguard their EU rights.

Robin Walker MP reassured Cypriot citizens that their rights would be secured in a post-Brexit era in the UK. He expressed assurance that all the provisions agreed between the United Kingdom and the EU in December 2017 for British and EU citizens have been published in a Green Paper and will be incorporated into law.

The Minister clarified that for those who already have indefinite leave to remain or have acquired permanent residence documents, there would be a simple process to exchange these documents for a settled status document, completely free of charge.

The High Commissioner for the Republic of Cyprus to the UK, Euripides Evriviades, thanked those in attendance and the speakers for sharing their insights. Mr Evriviades also highlighted eagerness on part of the High Commission to inform Cypriots [and UK Cypriots] of their rights. He emphasised that regardless of Brexit, “the UK will continue to attract Cypriots to live, to study, to work” and that “the same goes for Cyprus with regards to UK Citizens”. He expressed willingness to continue optimising the process of consular services for UK Cypriots seeking Cypriot citizenship documents.

The High Commissioner for the United Kingdom to the Republic of Cyprus, Stephen Lillie, said that similar events will be run for UK citizens in Cyprus in order to ensure that everyone is aware of their rights and how Brexit will affect them. Mr Lillie expressed his satisfaction at the strong cooperation between the UK and Cyprus and said that he was certain of continued close cooperation between the two countries after Brexit.

In his speech, Ambassador Panicos Kyriacou, Director of Consular Affairs and Schengen Division at the Ministry of Foreign Affairs of the Republic of Cyprus expressed his “deep appreciation for the Cypriot Diaspora in the UK” and their contribution “in areas such as culture, education, business, politics in the UK as well as for their efforts to promote and support their home country, Cyprus”.

Christos Karaolis, President of the National Federation of Cypriots in the UK spoke of the exceptional contribution that UK Cypriots have made in the UK, including their service in the British Army in both World Wars. On Brexit, he remarked that UK Cypriots “want an arrangement that is as close to our current arrangement with the EU as possible” because of the close familial and business links between UK Cypriots and Cyprus.

The event was organised by the Cyprus High Commission and the Department for Exiting the European Union, in association with the National Federation of Cypriots in the UK.

On the evening of Tuesday 19 June, the Executive Committee of the National Federation of Cypriots in UK, met with Ambassador Kyriacou to discuss improvements to expedite the approval and issuance process for Republic of Cyprus citizenship and identity documents.

Speaking after the meeting, the Federation President said “Brexit has resulted in a significant increase in demand by our diaspora for Cypriot citizenship. I welcome the improvements already to the Consular Services at the Cyprus High Commission, however we need to radically change and improve the process so it can deal with this increased demand. I look forward to continuing our close cooperation with the Cyprus High Commission and relevant Cypriot Government Ministries to improve this process.”

The High Commission of Cyprus in London have already started implementing changes and reforms that will make consular services more efficient. Some measures include: the weekly posting of applications to Cyprus; an appointment system which is set to be introduced; and SMS communications to notify people when passports/IDs are ready (a service offered to the High Commission by CytaUK).