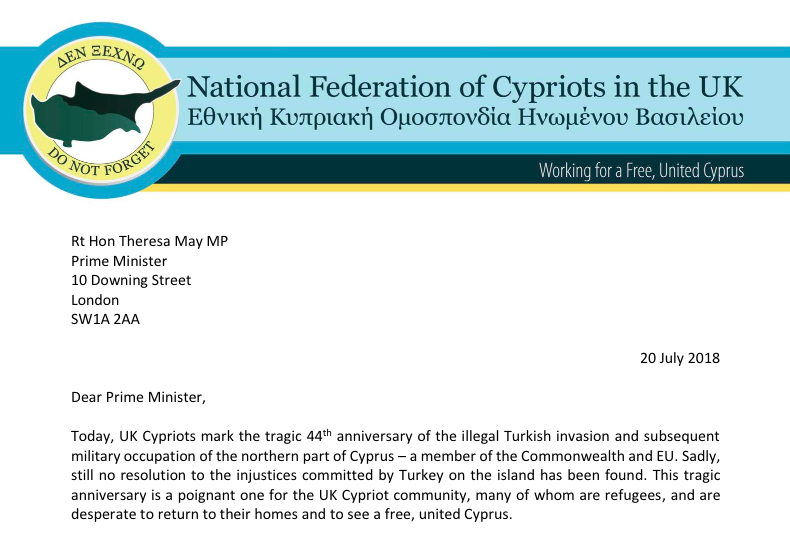 Letter to the Prime Minister

The Federation has sent a letter to the Prime Minister, Theresa May MP, on the 44th anniversary of the invasion of Cyprus by Turkey. The letter raises concerns about Turkey’s “increasingly authoritarian and aggressive policies towards Cyprus.”

The letter also reminds the Prime Minister that the tragic humanitarian issue fo the mission persons is still unresolved and that, “the UK can make a real contribution on this issue”.

It concludes by appealing to the Prime Minister to make a positive and lasting difference for Cyprus:

“The United Kingdom remains a crucial player in relation to Cyprus. Not only does it have historic treaty obligation under the Treaty of Guarantee 1960, it also maintains military bases on the island and it is Cyprus’s partner in the Commonwealth and in the United Nations, as a permanent member of the UN Security Council. It is also a strategic ally of Turkey. With a newly re-elected President Erdogan, now is the time for our Government to do more and use the leverage it has in order to exert real pressure upon Turkey to persuade that country, which holds the key to a solution in Cyprus, to engage positively and constructively towards a just and sustainable solution.

You have the power to make a lasting difference in relation to Cyprus and, on this tragic anniversary, I urge you to exercise this proactively and constructively.”

Letter to the Turkish Ambassador to the UK

The Federation also sent a letter to the Ambassador of Turkey to the UK to call on Turkey to end its occupation and recognise that a reunified Cyprus brings benefits to the region and to the prosperity of all Cypriots.

(Read the full letter to the Turkish Ambassador to the UK)