44 years since Turkey invaded Cyprus & messages of support from MPs 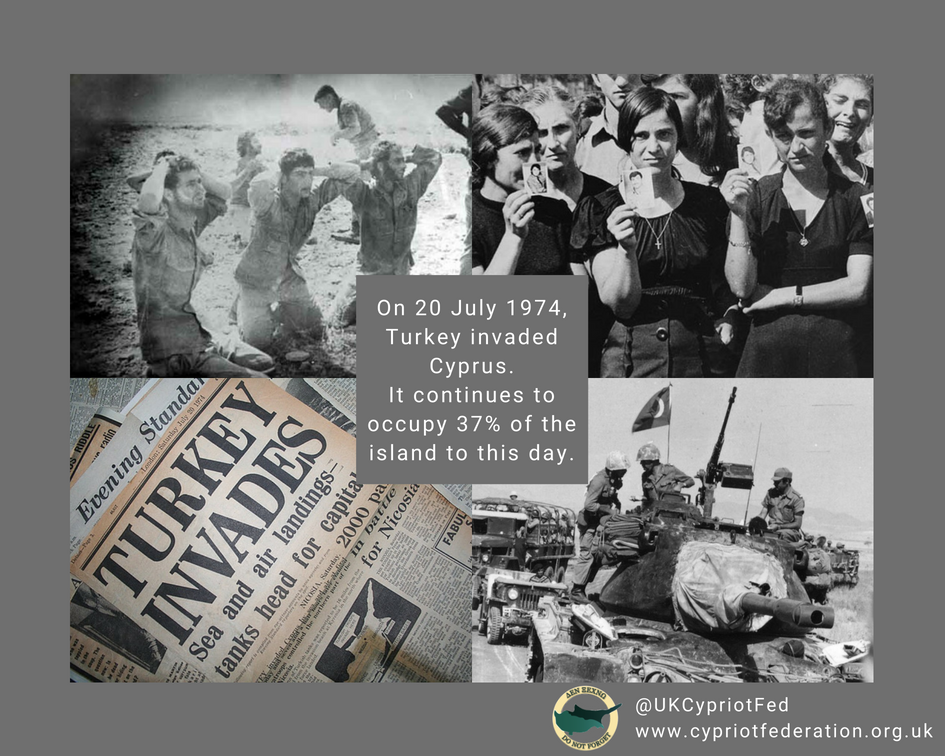 On this day (20 July) in 1974, Turkey launched the first wave of its full-scale invasion on Cyprus and its military continues to occupy 37% of the Republic of Cyprus. Turkey’s long-planned and premeditated invasion came just a few days after a coup d’état by the military junta in Greece on 15 July 1974. For 44 years now, Turkey continues to occupy the northern part of Cyprus in clear violation of international law and UN Security Council resolutions. Thousands of Cypriots were killed or injured as a result of the actions of the invading Turkish army and approximately 1,100 persons are still missing.
On the occasion of the 44th year since Turkey’s illegal invasion and continued occupation, Federation President, Christos Karaolis, said:

“Whilst 20 July is a dark anniversary for our community, our desire to end the Turkish occupation and reunify Cyprus will not be eroded over time. Our community, with the Federation at the forefront, will continue to campaign for a just and viable solution to the Cyprus issue. We will continue to advocate for the rights of all Cypriots and we will continue to advocate for a free, united Cyprus that is a normal state without outdated ‘guarantor powers’ and without occupying troops on the island. Cyprus must be a state where all its legal citizens – regardless of their origin, background or religion – can live in conditions where human rights are respected and where there is peace, progress and prosperity for all.“

A number of MPs recorded messages for our community on the anniversary of the illegal Turkish invasion at our recent event in Parliament, “Cyprus: Prospects for a Solution“. Watch the video below to hear what they had to say:
Recent Posts
Upcoming Events