Cyprus: Prospects for a Solution 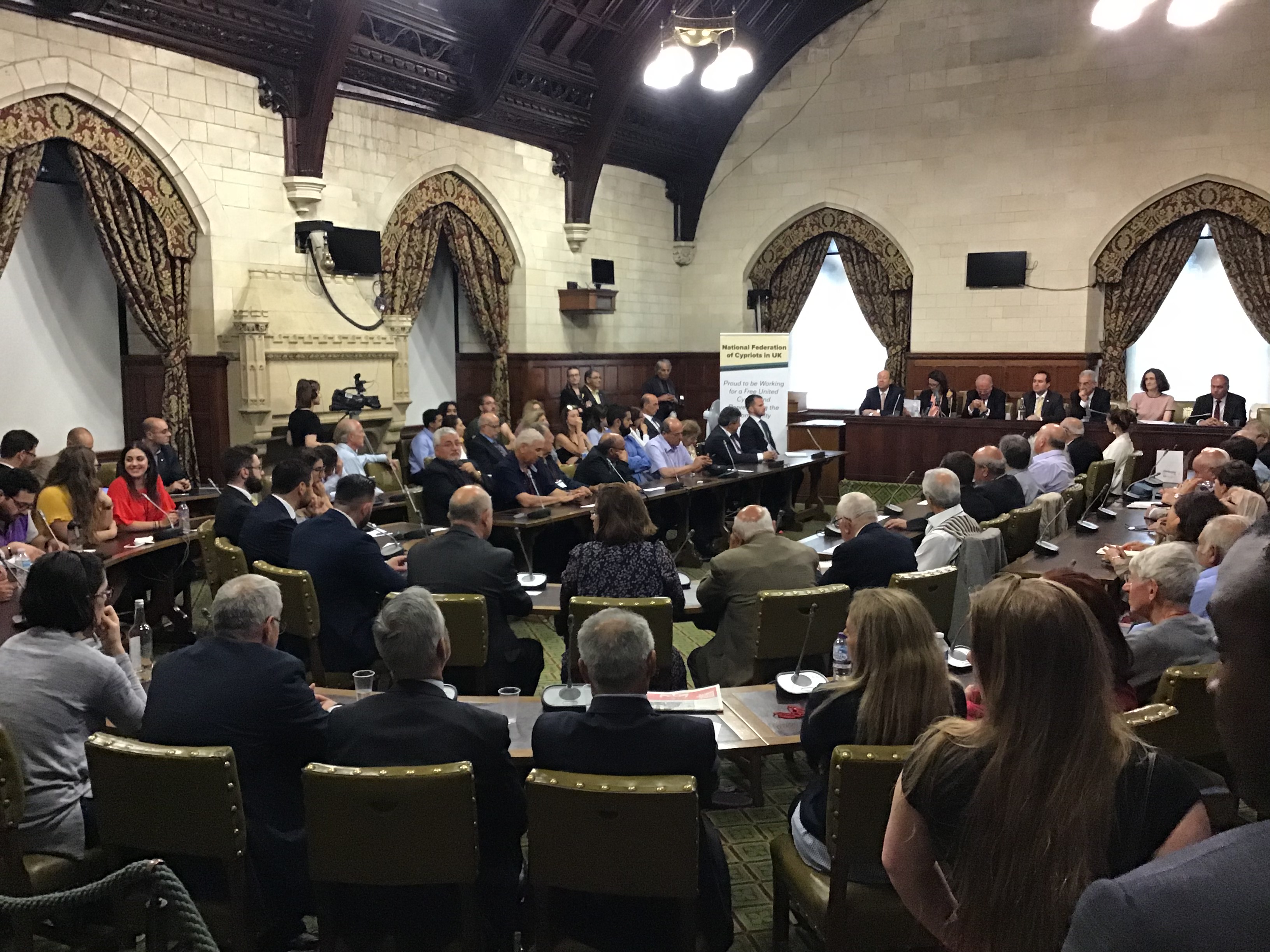 The National Federation of Cypriots in the UK and the All-Party Parliamentary Group (APPG) for Cyprus held its annual Parliamentary Reception for Cyprus on Tuesday 10 July to mark the 44th anniversary of the illegal Turkish invasion and occupation of July 1974. During the event titled, ‘Cyprus: Prospects for a Solution’ the Government Spokesperson of the Republic of Cyprus, Prodromos Prodromou, updated a full house of Parliamentarians and members of the UK Cypriot community about the latest developments on the Cyprus issue.

Mr Prodromou outlined the latest developments on the Cyprus issue, including the appointment of Jane Holl Lute as the UN’s new special envoy on Cyprus. Mr Prodromou also conveyed President Anastasiades’ readiness to resume talks to reunify Cyprus from where the negotiations left off and based upon the framework set out by the UN Secretary General, Antonio Guterres. He also emphasised the need for thorough preparation for any talks in order to ensure they would lead to a solution of the Cyprus issue. Mr Prodromou called for respect in the negotiations process so that “a just and viable solution could be found that wouldn’t leave either side feeling like winners or losers but would instead address the concerns of both communities.”

In closing, the Cypriot Government Spokesperson paid tribute to the work of the APPG for Cyprus and National Federation of Cypriots in the UK, for strengthening the ties between Cyprus and the UK and for keeping the Cyprus issue on the agenda in Parliament. He also commented that the two countries would continue to have excellent relations even after Britain leaves the European Union.

Federation President, Christos Karaolis, welcomed guests to the event and spoke of the UK Cypriot community’s hope and determination to see a reunited Cyprus free from the outdated system of guarantees and without the presence of foreign troops. He said, “what we’re asking for is both fair and simple. A fully functioning state that is in line with the rule of law and is free from foreign interference. Put simply a “normal state” as the UN Secretary General said.”

Mr Karaolis also said that “the UK Cypriot community is clear in its demands that Turkey’s unacceptable demands [in the negotiations] and influence in Cyprus must end.” He referred to the Federation’s recent email campaign where MPs from Aberdeen to Exeter were contacted by constituents concerned about Turkey’s negative influence in Cyprus. Mr Karaolis emphasised that UK Cypriots would continue to have their legitimate concerns heard and would continue to campaign for a free, united Cyprus.

The High Commissioner for the Republic of Cyprus to the UK, Euripides Evriviades, addressed the event, thanked everyone for attending and expressed deep gratitude to the APPG for Cyprus for being “all-weather friends of Cyprus”. He also commented on the major contribution that the UK Cypriot community has made in the UK.

Sir Roger Gale MP, who had earlier been re-elected Chair of the APPG for Cyprus, welcomed the guests to the event and emphasised that MPs were united across party lines in favour of the reunification of Cyprus. He said that he has spent the best part of his political career “trying to release Cyprus from occupation and to return the island to its rightful owners.” Sir Roger concluded by saying that “we shan’t give up until we achieve that”.

Speaking on behalf of the UK Government, Foreign Office Minister for the Commonwealth & UN, Lord Ahmad of Wimbledon, expressed gratitude to the High Commission for Cyprus to the UK, the National Federation of Cypriots in the UK and the APPG for Cyprus for their work in strengthening the ties between the two countries.

The Minister said that “the ultimate objective is to achieve a solution in line with the High-Level Agreements”. Lord Ahmad also stressed the importance of the Commonwealth to both the UK and Cyprus and said that both are working towards making it more secure and prosperous.

Fabian Hamilton MP, Shadow Minister for Peace and Disarmament, spoke on behalf of Her Majesty’s Opposition and reiterated the Labour Party’s steadfast commitment to the reunification of Cyprus commenting that, “security for Cyprus must be through the EU and not through old-fashioned guarantee systems nor by foreign troops nor by Turkey”.

The Rt Hon. Theresa Villiers, MP for Chipping Barnet, said that “it’s a tragedy that 44 years after the invasion, Cyprus remains divided” and that she “fights for a free, united Cyprus every day” by asking questions in the House of Commons and raising important issues with the UK Government such as the need to end the “outdated system of guarantees”. Ms Villiers reaffirmed her support for the abolition of the Treaty of Guarantee and foreign country intervention rights, as well as for the Republic of Cyprus’ right to explore and exploit natural resources in its EEZ.

The next MP to speak was Rt Hon. Joan Ryan, MP for Enfield North. Ms Ryan expressed her deep concerns that, under President Erdogan, Turkey is “sliding towards an authoritative regime” and that would have worrying consequences for Cyprus and the wider region. Ms Ryan also paid tribute to the UK Cypriot community and particularly their “important voluntary work”.

Bambos Charalambous MP for Enfield Southgate, and the only MP of Cypriot origin, highlighted the importance of resolving the tragic humanitarian issue of the missing persons. Mr Charalambous expressed his delight that the Federation was making its presence felt through its email campaigns which he said have “bombarded him with emails from constituents about Cyprus”. He also referred to questions he asked in Parliament about the Cyprus issue, torture by British soldiers in Cyprus in the 1950s, and Turkey’s aggression in Cyprus’ EEZ.

Catherine West, MP for Hornsey & Wood Green, said that “we must all work towards a bi-zonal, bi-communal, federal Cyprus”. Ms West also said she “supports peace, human rights and justice” and that she hoped to see the resumption of reunification talks very soon.

Mike Freer, MP for Finchley & Golders Green, said that “44 years after the invasion of Cyprus by Turkey, it’s important to remember that while time has passed, the issues haven’t gone away. We still have people dispossessed from their land and their homes, families with missing relatives, and an island still divided… we continue to strive for a just solution for Cyprus and a reunited island.”

Stephen Gethins MP, SNP Foreign Affairs Spokesperson, paid tribute to the contribution that the UK Cypriot community has made in the UK. He also said that he looked forward to seeing a reunified Cyprus in the future and hoped to work closely with the community in the future.

Lord Collins, Shadow Foreign Affairs Spokesperson, said that the event left him with “a sense of hope that we will achieve the justice and independence that we’ve so badly needed over the last 44 years”.

Roger Godsiff MP said that he “really hopes to see a solution to the Cyprus issue sooner rather than later” and also that he hopes that Cypriots continue to demand and campaign for a reunified island.

Other MPs in attendance were Khalid Mahmood (Shadow Minister for Europe) and John Penrose (MP for Weston-super-Mare).

Other distinguished guests in attendance included members of the Cyprus High Commission; Andreas Papaevripides, President of POMAK (the World Federation of Overseas Cypriots); Harry Charalambous, President of NEPOMAK UK (the youth branch of POMAK); members of the National Federation of Cypriots’ Executive Committee and Secretariat; and representatives from Cypriot communities in Birmingham, Cardiff, Manchester, and Leeds.