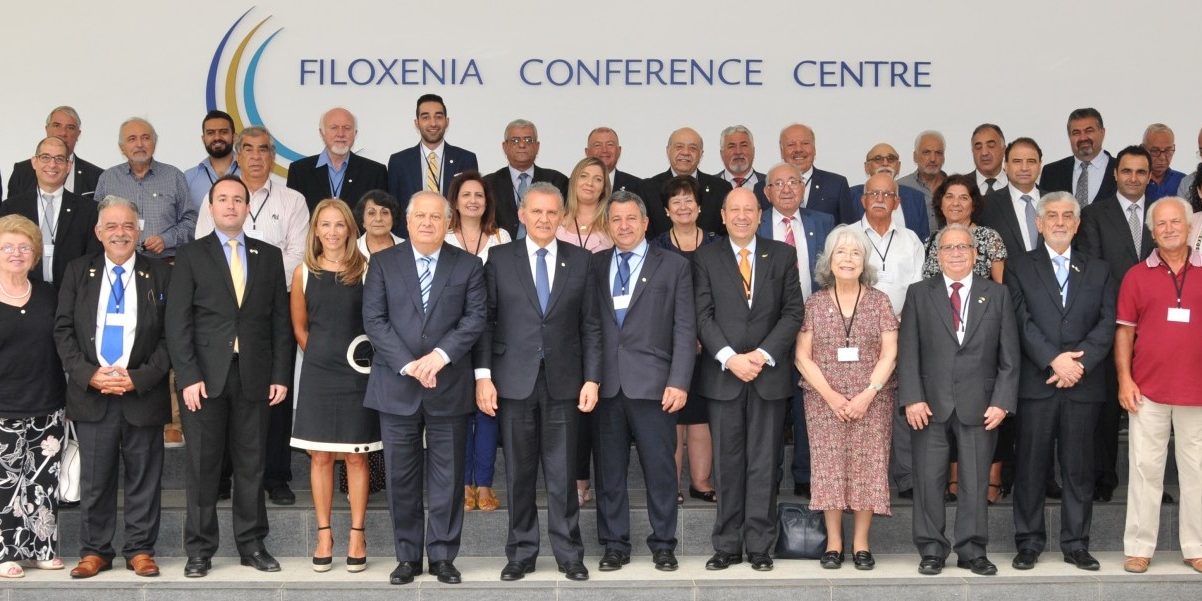 The 9th World Conference of the World Organisation for Young Overseas Cypriots (NEPOMAK) and the Executive Council meeting of the World Federation of Overseas Cypriots (POMAK) – International Coordinating Committee “Justice for Cyprus” (PSEKA) was held in Nicosia, on 25-27 July 2018. Executive Council members from the UK were represented by the National Federation of Cypriots in the UK

Opening the Conference, President Anastasiades thanked diaspora Cypriots for their political, social, cultural and philanthropic contributions to Cyprus and the furthering of bilateral and multilateral relationships with the countries in which they live. He went on to say “You are proud of your roots and, over the years, you have continued to demonstrate that you are worthy Ambassadors of our traditions, cultures, and of course, the national cause of Cyprus in your home countries”

Referring to his meeting with the new UNSG Advisor on Cyprus, Mrs Jane Holl Lute, President Anastasiades reiterated his determination and genuine will to engage again in a dialogue on the basis of the Secretary General’s points, international law and the European acquis. “If we overcome security concerns, then the European acquis could provide answers to any other pending issues and differences that may exist between the two communities”, he said. The President of the Republic added that at his meeting with Mrs Lute, he expressed his readiness to resume talks from the point they stopped, provided that all six points of the Guterres Framework are accepted. Addressing Turkey’s role, he said, it continues to insist on the same instransigent attitude, claiming that the usurpation of properties, the violation of human rights, the illegal settlers and the demand for a permanent presence of Turkish troops serve to protect the Turkish Cypriots, while this is clearly a pretext contrary to international law, and the principles agreed during the talks, that the security of one community cannot constitute a threat to the other community.

The Opening ceremony was also addressed by the Presidential Commissioner for Humanitarian Affairs and Overseas Cypriots Mr Photis Photiou, the President of the House of Representatives Mr Demetris Syllouris, the Deputy Foreign Minister of Greece Terens Quick, the President of the Youth Board of Cyprus, Mr Panayiotis Sentonas, as well as the Presidents of POMAK (Andreas Papaevripides), PSEKA (Philip Christopher) and NEPOMAK (Antonia Michaelides). Also in attendance was the Egyptian Minister for Expatriate Affairs, Nabila Makram, and the Armenian Diaspora Minister, Mkhitar Hayrapetyan.

In his remarks Commissioner Photiou thanked the diaspora Cypriots saying “You are the best ambassadors for Cyprus abroad. We admire your successes and the progress you are making in your countries of residence”. He made a special reference to diaspora youth, “who enthusiastically, and with their pure love for Cyprus, through specific initiatives and actions give a new impetus to our country’s interests within their countries of residence”
In her remarks, the President of NEPOMAK Antonia Michaelides, highlighted the achievements of NEPOMAK over the last 15 years, including this year’s record attendance of 110 young Cypriots, from around the world, at the NEPOMAK conference. She also announced that after 4 successful years at the helm, she would be stepping down as President. In their remarks, the Presidents of POMAK (Andreas Papaevripides) and PSEKA (Philip Christopher) reiterated the diasporas commitment to supporting efforts to end the occupation and reunite Cyprus.
Updates from Government Ministers and Parliamentary representatives
During the conference, delegates met with Cypriot Government Ministers as well as the leadership of the Cypriot parliamentary political parties.

Commissioner Photiou commended the diaspora, and especially NEPOMAK, for their vigorous commitment to the Cyprus issue and specifically the issue of the missing, enclaved persons and cultural desecration in the occupied northern part of the island. On the issue of the enclaved, Commissioner Photiou described how religion and history books, as well as proposed teachers, were rejected by the occupation regime from going to the elementary school in occupied Rizokarpasso.
Mr Photiou was also joined by Nestoras Nestoros from the Committee on Missing Persons who delivered a moving briefing on the issue of the missing. He explained that evidence to locate possible burial sites is released at the discretion of organisations who had staff or troops on the ground, including the Red Cross and the UN, however the archives of the Turkish army continue to remain inaccessible for the location of such burial sites. In addition, the Committee shared evidence on the intentional relocation of the remains and the lack of access to military zones in the occupied areas. So far 664 Greek Cypriots and 222 Turkish Cypriots have been identified while the fate of 1116 people declared as missing remains unknown.
In his briefing Foreign Minister Christodoulides gave an extensive overview of Cyprus’ foreign policy priorities and strategic pillars. He outlined the strong bilateral and multi-lateral relationships that the Government of Cyprus is continuing to deepen (as evidenced by the opening of new diplomatic missions in Cyprus by Saudi Arabia and Japan), and the increased focus that other countries are placing on Cyprus as a source of expertise and knowledge in the region.
Finance Minister Georgiades shared perspectives on Cyprus’ economic growth, which at ~3.% for 2018, is forecast to be amongst the highest in the EU, as well as the balanced budget that the Government operates. The Finance Minister also outlined the key areas of reform and modernisation that are being undertaken to facilitate stronger economic growth, including the Banking Sector and Justice System. Finally, the Minister outlined the potential headwinds on the Cypriot economy including Brexit.
Energy Minister Lakkotrypis briefed the delegates on the developments in Cyprus’ energy exploration, including the technical discoveries in the Calypso and Onesiphoros fields, the recent threats from Turkey in Block 3, the drilling plans for Exxon Mobil in Block 10 in the autumn and progress on the East Med pipeline. Responding to a question about Turkey’s so-called claims to be protecting the energy rights of Turkish Cypriots, the Minister highlighted that under Turkey’s (illegal) proposals for Cyprus’ EEZ the Onesiphoros & Block 10 fields would be in Egypt’s EEZ, the Aphrodite field would be in Israel’s EEZ and the Cuttlefish fields would be in Lebanon’s EEZ. This would have the effect of relinquishing a large part of Cyprus’ natural resources and is contrary to the delineation agreements already signed by the Republic of Cyprus.

Working lunch with UK High Commissioner H.E. Stephen Lillie
On the side-lines of the conference, members of the UK delegation hosted a working lunch with the UK High Commissioner to Cyprus, Mr Stephen Lillie. The topics discussed included Brexit, efforts to reunite Cyprus and the bilateral relations between the UK and Cyprus
Roundtable discussion with High Commissioner and Ambassadors
Delegates also had a roundtable discussion with the Deputy British High Commissioner, as well as the Ambassadors of the USA, Greece, Egypt and Israel. The topics discussed included bilateral relations with Cyprus, exploration and exploitation of energy reserves, the UNFICYP mandate and Brexit.
Briefing and Reception with H.E. President of Cyprus, Mr Nikos Anastasiades

The Central Councils of POMAK, PSEKA and NEPOMAK had a private meeting with President Anastasiades, at the Presidential Palace, where they received an extensive, confidential briefing on the current developments on the Cyprus issue.
Following the meeting, the President and First Lady, Andrie Anastasides, hosted a reception for conference delegates in the gardens of the Presidential Palace. At the reception, President Anastasiades presented the Medal for Exceptional Contribution to three exceptional diaspora Cypriots whose life’s work has been a continuous active contribution to Cyprus abroad. They were awarded the honour as a result of their lengthy and dedicated service to their homeland, Cyprus. The three recipients were: Varkey Foundation Global Teacher Prize Winner 2018, Andria Zafirakou, renowned Professor of fetal medicine, Kypros Nicolaides and Michelin starred Chef Andreas Mavrommatis.
NEPOMAK World Conference 2018

NEPOMAK marked its 15th anniversary with its largest ever conference in Nicosia, with over 110 young diaspora Cypriot delegates from around the world. In addition to briefings from the President and Government Ministers, delegates held workshops to discuss NEPOMAK’s strategy, existing programmes and potential ideas for new programmes. New and more established faces came together to discuss how NEPOMAK can further its work by bringing together young overseas Cypriots as well as supporting the President of the Republic of Cyprus in his efforts to deliver a free, united Cyprus.

A new 22-member Executive Committee for the period 2018-2020 was also elected. Delegates left conference with an enhanced sense of optimism, motivation and excitement about what the next few years will bring for NEPOMAK.