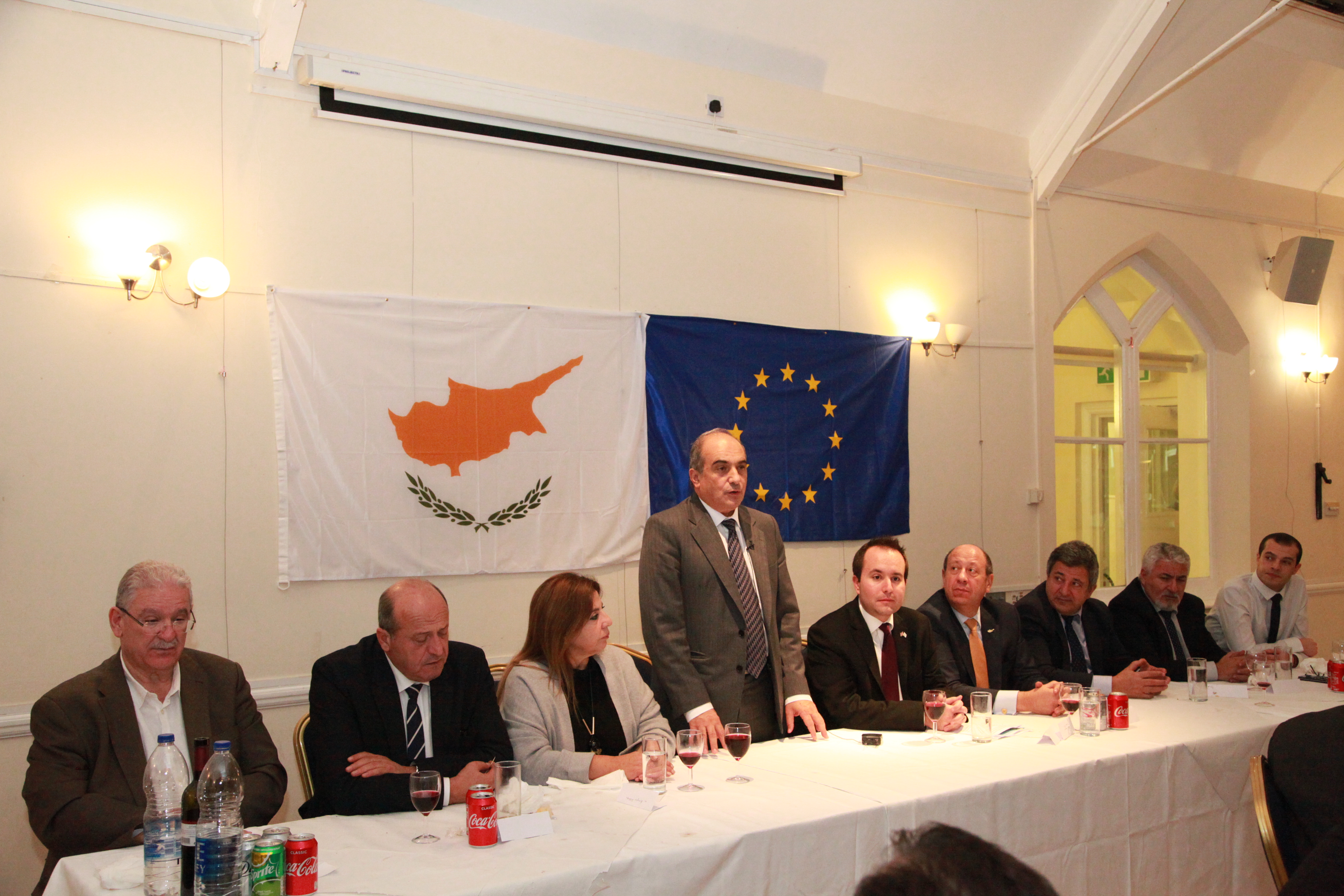 The National Federation of Cypriots in the UK hosted a working dinner in honour of the President of the House of Representatives of the Republic of Cyprus on Thursday 25 November. Mr Syllouris addressed representatives of the Federation’s member associations and told them that “President Anastasiades is working hard to restart the talks to reunify the island but that the Turkish side has not shown the same willingness.” He added that “all political efforts of the Republic of Cyprus are towards a peaceful solution to the Cyprus issue.”

Mr Syllouris informed of the latest developments with regards to the House of Representatives including the new technology and innovative ideas that were being implemented. He said that the use of online platforms will improve and modernise Cypriot democracy whilst new initiatives such as ‘parallel parliaments’ will give special interest groups such as the young, disabled and elderly even more opportunity to raise specific issues with the House of Representatives.

The President of the House of Representatives also spoke of various ‘soft diplomacy’ initiatives that the House has undertaken in order to strengthen relations between Cyprus and the UK. These include improved communication and information as well as building strong relationships with British universities.

Euripides Evriviades, High Commissioner for the Republic of Cyprus, offered remarks to the UK Cypriot community about the process of obtaining Cypriot citizenship and some of the difficulties that people have experienced. The High Commissioner spoke about how the Cyprus High Commission will work very closely with the community on such issues and is currently introducing new systems to improve the process.

During his welcome address, Federation President, Christos Karaolis, thanked the President of the House of Representatives for visiting the Federation and UK Cypriot community. Mr Karaolis also spoke of the Federation’s online campaigns that have been used in recent to amplify the voice of the UK Cypriot community on the Cyprus issue as well as about obtaining Cypriot citizenship and Brexit. He concluded by saying that, “the Federation will continue demanding that the UK fulfil its responsibilities towards Cyprus, working with H.M. Government and all political parties for a free, united Cyprus.”

Following the speeches, representatives of the Federation’s member associations had the opportunity to exchange views on a range of issues with the President of the House of Representatives. Some of the topics that were raised were: the prospects of negotiations restarting to reunify Cyprus and end the Turkish occupation, Brexit, and the role of the diaspora.

Before the dinner began, the Federation held a general meeting where representatives of its member associations discussed the latest community issues and work of the Federation. Discussion focussed on the Federation’s Cypriot citizenship & Brexit survey; the 2019 World Conference of Overseas Cypriots; the demonstration against the ‘unilateral deceleration of independence’ of the illegal regime outside the Turkish embassy on 15 November at 6:30pm; the situation with regards to flights to Cyprus; and the upcoming Nostos II trilateral initiative between Cyprus, Egypt and Greece.