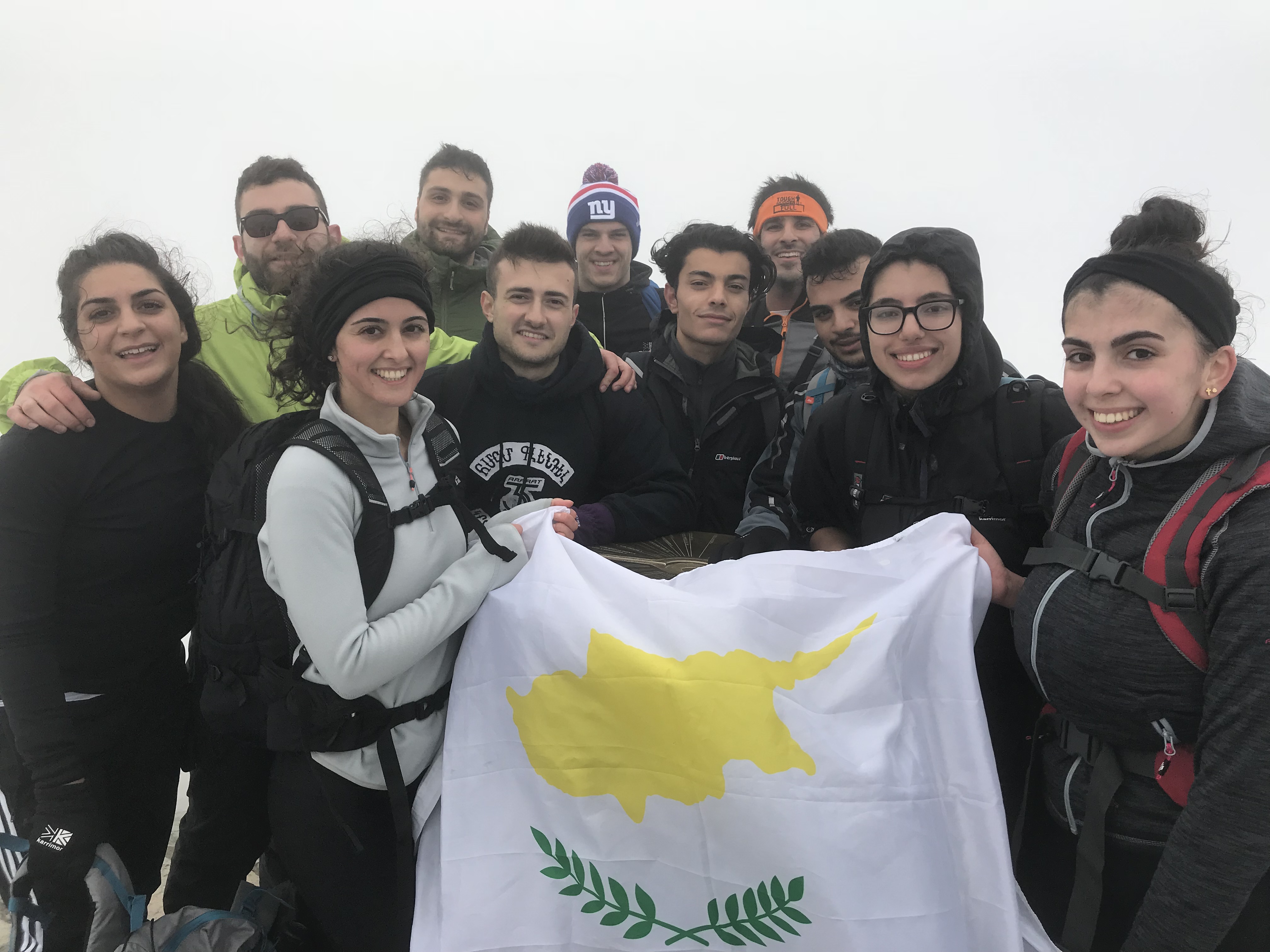 On the 29thSeptember, members of NEPOMAK UK successfully hiked up 3 of the tallest and most challenging mountains in Wales. The intense challenge was completed in just 23 hours, with the team commencing at 1.30pm on Saturday and pushing through the night towards a 12.30pm finish on Sunday afternoon. Their efforts were to raise money and awareness for two important charities within the Cypriot community; the Thalassemia International Federation and the Wood Green Cypriot Community Centre have both been of great benefit to UK Cypriots over the past decades.

The challenge was completed by 11 members of NEPOMAK UK (A-Z): Harry Charalambous, Michali Demetroudi, Gregory Demou, Raphael Gregorian, Rico Joannou, Maria Lazarou, Maria Mistakidis, Andrew Savvides, Mary Savvides, Christos Tuton and Georgia Zacharia and enthusiastically supported by their driver Chriso Ioannou who is a member of the Secretariat of the National Federation of Cypriots in the UK.

The hikers have currently raised over an outstanding £2100, well in excess of their target, to be split equallybetween the Thalassemia International Federation and the Wood Green Cypriot Community Centre. Both these charities require financial support and the team are grateful to have had the opportunity to support them. You can still make a contribution by donating via the JustGivingpage: www.justgiving.com/crowdfunding/welshthreepeakstifwcc or by following links on the NEPOMAK.uk Facebook page.If you would like to donate but can’t access these pages, please feel free to email us at uk@nepomak.org

The hike itself saw members complete what is known as the “Welsh Three Peaks Challenge”. It is an intensive challenge in which the participants trekked a distance of 17 miles and ascended more than 7600 feet, all within a target time of 24 hours. The team conquered Mount Snowdon, Cadair Idris and Pen y Fan with an hour to spare! This was despite adverse weather conditions and the difficulty of navigating through hostile landscapes, at times with extremely low visibility due to darkness and mist.

Despite the low temperatures, fog and heavy winds, the hikers maintained their spirit and supported each other at all times. Upon reaching the final summit, the team celebrated in true Cypriot style; performing an alpine Sousta dance in the dense fog, with the Cypriot Flag waving proudly behind them.

Harry Charalambous, President of NEPOMAK UK, said: “I’m proud of the team for their immense drive, determination and support for each other throughout the challenge. We really wanted to do something to raise money and awareness for two charities that have played a massive role in our community’s history and continue to improve people’s lives through their work, so I’m delighted that we’ve raised so much money through this initiative.”

NEPOMAK UK are extremely grateful for the promotion and support of this event by members of the Cypriot community, helping them to surpass their sponsorship target by over £600. Local MPs Bambos Charalambous (Enfield Southgate), Catherine West (Hornsey and Wood Green) and Theresa Villiers (Chipping Barnet) also kindly expressed their support for the initiative and praised NEPOMAK UK for engaging with causes such as these.

*NEPOMAK UK is the UK branch of NEPOMAK, the World Organisation for Young Overseas Cypriots. It is a voluntary, not-for-profit organisation run by young Cypriots and is dedicated to their needs by running a number of cultural, educational, social, networking, charitable and activist initiatives. NEPOMAK is always looking for new volunteers in the UK and worldwide to support its fantastic cause. For more information on NEPOMAK or to get involved, please visit our website (www.nepomak.org) and follow us on social media.