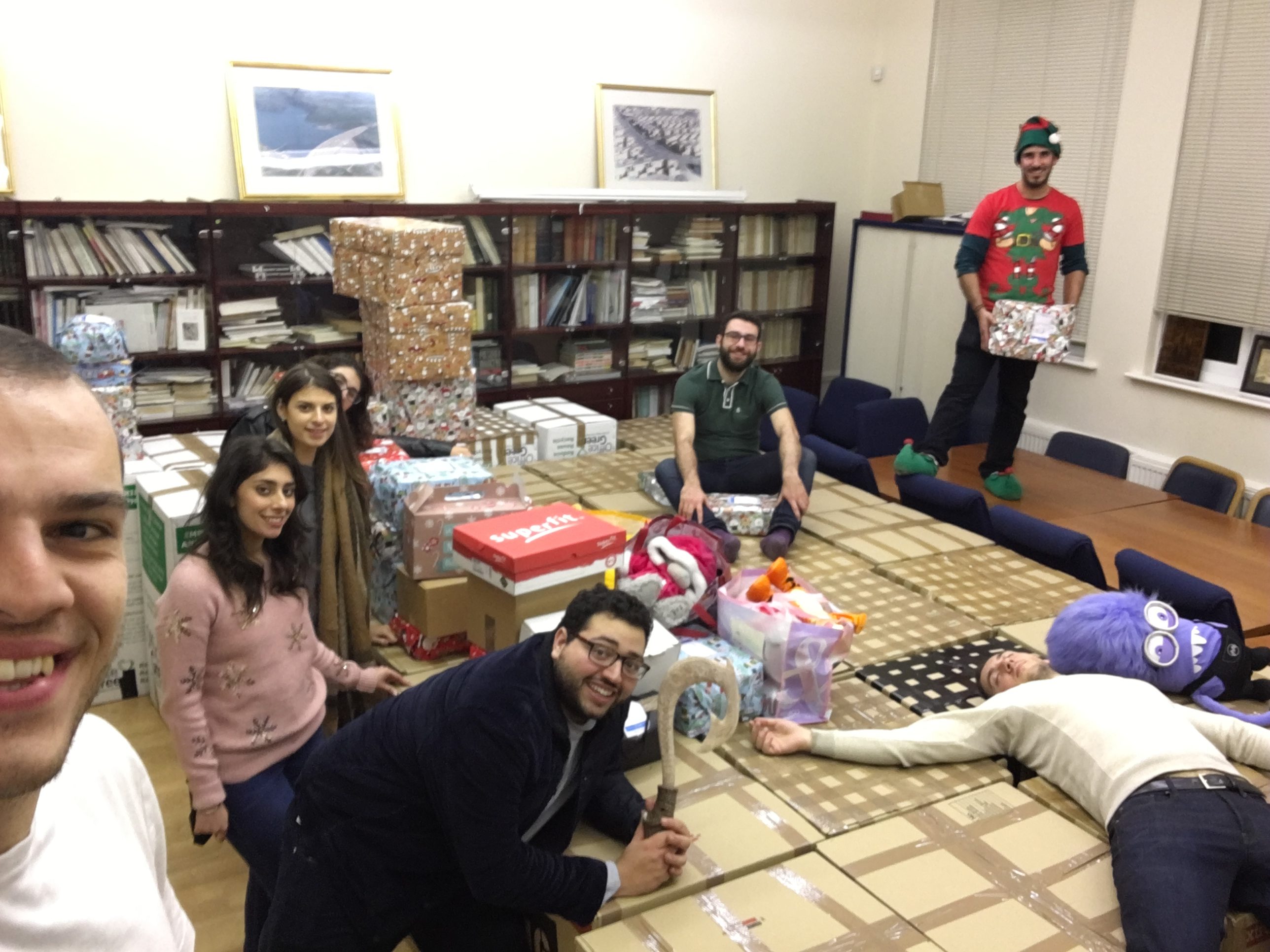 NEPOMAK UK’s Santa’s Shoebox campaign reached Cypriot communities across the UK and coordinated their efforts to deliver presents to the children of Cyprus this Christmas. On the 24thand 25thof November, NEPOMAK’s team collected presents from all over London, as well as from Manchester, Mansfield, Leicester, Birmingham, Coventry and Cardiff. The schools and communities rallied together and donated a total of 1,200 presents, improving on the total number achieved last year. Maria Patronas who led the NEPOMAK UK campaign said “I am really proud of the community for coming together for such a great cause. Thank you to all who helped and supported us in this campaign and we wish you a Merry Christmas!”.

After the shoeboxes were collected, they were taken to the Cypriot Brotherhood in North Finchley where NEPOMAK UK members spent all of Sunday 25th November sorting and packaging the boxes ahead of their departure for Cyprus. The NEPOMAK team worked for over 12 hours on Sunday alone in an immense team effort that all were very proud of.

The shoeboxes are now on their way to Cyprus, thanks to the generous support of Mondial Forwarding, and should arrive next week. In Cyprus, the presents will be greeted by Presidential Commissioner for Overseas Cypriots and Humanitarian Affairs, Photis Photiou. Mr Photiou and his team will then distribute the presents to underprivileged children in Cyprus. We will update the community on their progress when they reach the children and we hope to also have some pictures of the children with their presents.

Harry Charalambous, President of NEPOMAK UK who had driven across the Midlands to collect presents, said, “I am very proud of the way our community has united this year. It was incredibly inspiring visiting the schools, particularly in the smaller communities. All the teachers and children were keen to be involved and showed a true togetherness in their support for the cause.’

Tony Kleanthous, Chairman of Barnet FC continued his support of NEPOMAK’s campaign and donated sportswear, footballs and gifts for the 48 children enrolled in the school in Rizokarpasso. The children in Rizokarpasso grow up in difficult conditions as the town is an enclave in the occupied area of Cyprus and helping them is one of the key reasons why NEPOMAK UK continue the campaign.

Some of the shoeboxes will be sent to Paidiatriki Kliniki tou Makariou Nosokomeiou which is a children’s hospital in Nicosia. Many of the children will, unfortunately, be in hospital over the Christmas period. NEPOMAK hopes these presents will remind them that they are not alone at this special time of the year and bring a smile to their faces.

*NEPOMAK UK is the UK branch of NEPOMAK, the World Organisation for Young Overseas Cypriots. NEPOMAK is a voluntary, not-for-profit organisation run by young Cypriots and is dedicated to their needs by running a number of cultural, educational, social, networking, charitable and activist initiatives. NEPOMAK is always looking for new volunteers in the UK and worldwide to support its fantastic cause. For more information on NEPOMAK or to get involved, please visit our website (www.nepomak.org/uk) and search for us and follow us on social media.