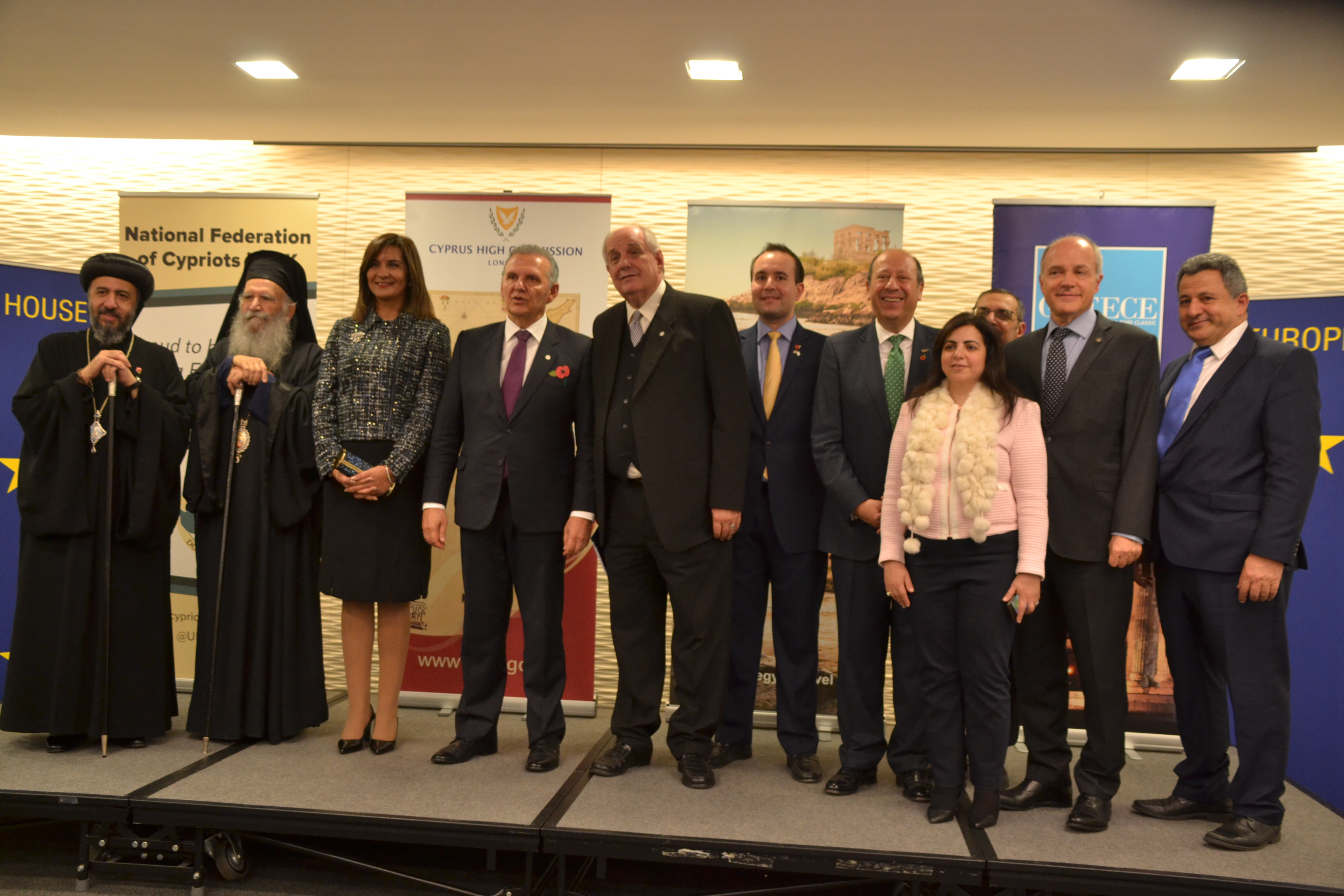 The National Federation of Cypriots in UK organised the London Nostos II programme, on behalf of the three countries, which included roundtables, parliamentary meetings, meetings with religious leaders and a cross-diaspora reception.

The three Diaspora Ministers hosted two roundtables with members of the UK-based diaspora communities of the three countries. The first of the two roundtable meetings focused on Health and was attended by UK-based doctors and medical professionals, including UK Cypriot Professor Dr Kypros Nicolaides, Founder of the Fetal Medicine Foundation. Topics discussed included cooperation between the three Diasporas, improving medical standards in each country and promoting medical tourism.

The second roundtable meeting focused on culture and tourism. The three Diaspora Ministers all emphasised the importance of advertising each country to tourists as “more than just sun & sea” and highlighted the outstanding cultural heritage of each country. The Diaspora ministers also spoke of their new campaign, ‘bring a [British] friend with you’, to encourage people who aren’t familiar with the three countries to visit on holiday. Thanasis Gavos of Cyprus News Agency chaired the discussion as Tourism professionals from the UK-based Diasporas of each country shared views on how to promote the countries more widely, including package holidays between the three countries, cruising and acting as ambassadors for tourism to the countries.

Meeting in Parliament with the Chairs of the APPGs

The three Diaspora also hosted a joint meeting in House of Commons with the respective All Party Groups of Cyprus, Greece and Egypt. The meeting was attended by Sir Roger Gale MP, Chair of the All-Party Parliamentary Groups (APPG) for Cyprus; Stephen Timms MP, Chair of the APPG for Egypt; and Alberto Costa, Chair of the APPG for Greece. During the meeting the Diaspora ministers outlined the goals of ‘Nostos’ – to bring the diasporas of the three countries together. The MPs and Diaspora Ministers exchanged views on how to develop links between the respective UK-based communities and how the APPGs can contribute to this collaboration and advocate on issues of common interest.

The three Diaspora Ministers also met with Archbishop Gregorios of Thyateira and Great Britain, who recently celebrated 30 years as Archbishop. They also separately met with Coptic Archbishop Orthodox Archbishop of London Angaelos-Angelos. During both meetings they discussed the important role that the Church can play as one of the main focal points for the UK Cypriot, Egyptian and Greek communities.

The Nostos II programme culminated in a reception and exhibition where the UK-based communities of the three diasporas came together to celebrate their cultures and build stronger bonds with each other.

Commissioner Photiou addressed the reception and commented that “Nostos II has been very productive”. He also stated that, “there are historical links between the three countries and our people deserve the best” and that Nostos II can be a platform for the three Diasporas to build strong and beneficial relationships upon. Mr Photiou concluded by paying tribute to the National Federation of Cypriots in the UK, NEPOMAK and the three diplomatic missions for their contribution towards the organising and running of the successful events.

In her speech, Ms Makram said that “with the love and the chemistry that exists between us, we can achieve much more” and praised the UK Egyptian community whilst also urging them to build strong relations with the Cypriot and Greek communities in the UK.

Mr Quick described the diaspora as an integral part of the efforts to promote Greek tourism. He added that a common goal for the three countries is to attract tourists all-year round including through the “bring a [British] friend” initiative. Mr Quick also thanked the media for covering Nostos II and praised the use of social media in raising the profile of the meetings and events.

The National Federation of Cypriots in the UK President Christos Karaolis, who along with his team was congratulated by all ministers for helping organise the events, said: “The Nostos II programme in London this week, has built on the successful cooperation between Cyprus, Greece and Egypt at the Governmental level, by bringing the UK diasporas and parliamentary friends of our three countries together. This strong collaboration will enable us to join efforts and advocate on issues of common interest. We’re looking forward to continuing to deepen this cooperation over the years to come!”

The diplomatic missions of Cyprus, Egypt and Greece were also praised by the three diaspora ministers for their contribution towards Nostos II. Special praise was given to the High Commissioner for Cyprus to the UK, Euripides Evriviades; the Charge’ d’Affaires of Egypt to the UK, Nermine Elzawahry; and the Ambassador of Greece to the UK, Demetrios Caramitsos-Tziras.