UK Cypriots call for a free, united Cyprus outside the Turkish Embassy in London 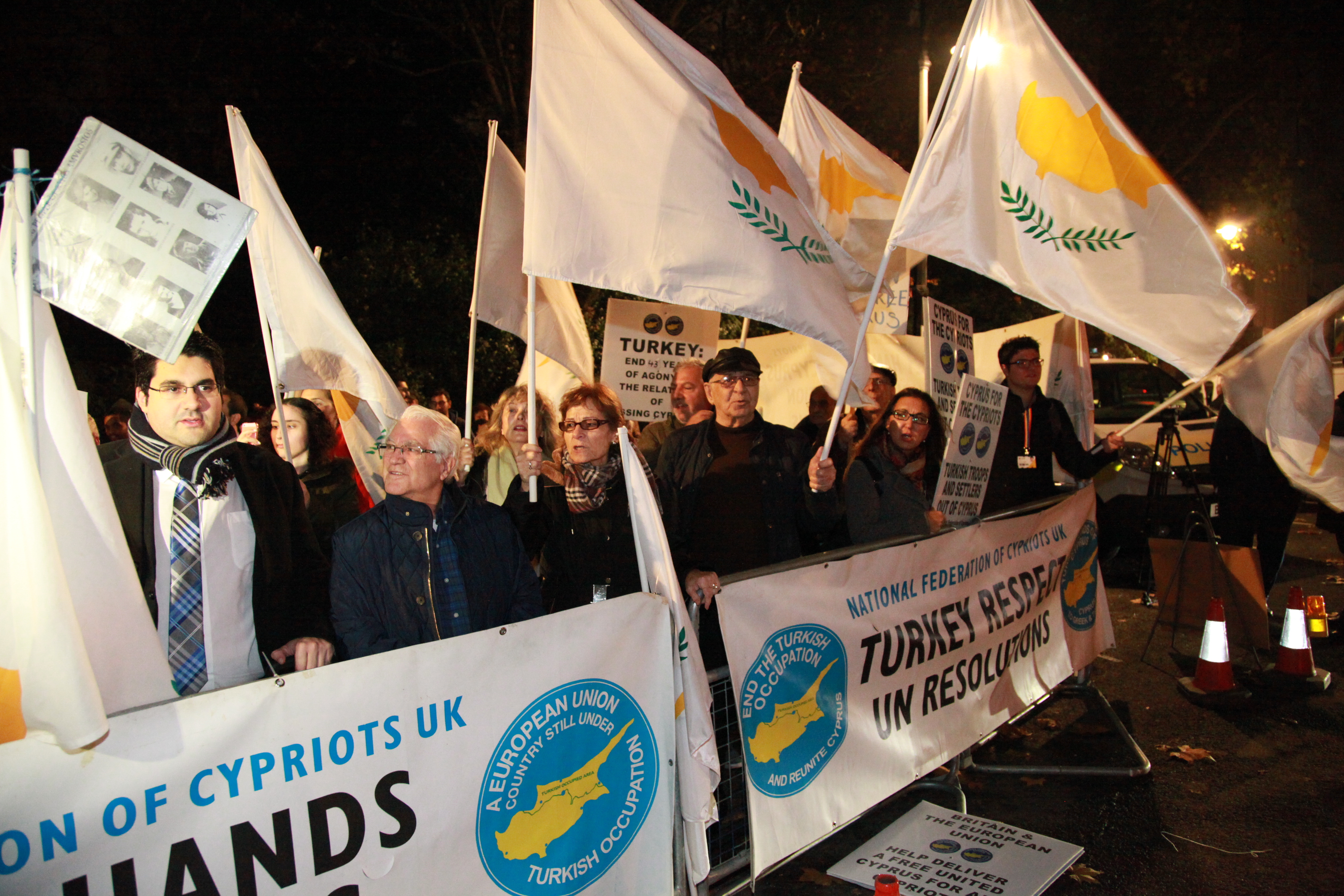 35 years to the day since the so-called ‘TRNC’ illegally and unilaterally declared its independence, UK Cypriots once again took action to demonstrate their support for a free, united Cyprus; the reversal of the illegal unilateral declaration of independence; and end of the occupation of more than a third of Cyprus by Turkey’s military.

The illegal ‘UDI’ was strongly condemned when it happened in 1983 by United Nations Security Council Resolution 541 (1983) – which described it as ‘legally invalid’ – and Resolution 550 (1984), which called on Member states not to recognise the secessionist entity. The UK also strongly criticised the secessionist action and the then Prime Minister Margaret Thatcher called on the President of Turkey to “secure the reversal of this action.” The condemnation continues to this day and only Turkey recognises the so-called ‘TRNC’.

Letter to the Ambassador of Turkey

To highlight the continued injustices by Turkey in Cyprus and the desire of the UK Cypriot community for reunification, the President of the National Federation of Cypriots in the UK, Christos Karaolis; the President of POMAK, Andreas Papaevripides; the President of NEPOMAK, Christos Tuton; student representatives; and Officers of the Federation delivered a letter to the Ambassador of Turkey. The letter, signed by the Federation’s President, calls on Turkey to accept that “Cyprus must be a normal, modern, truly independent and sovereign, European state and not a protectorate of Turkey through an outdated and unworkable security system.” The letter also criticises Turkey for refusing to let Cypriots decide their own fate and for imposing “increasingly authoritarian policies” that threaten the very existence of the Turkish Cypriot community, something that scares all the communities of Cyprus.

Click here to read our letter to the Turkish Ambassador

Letter to the Prime Minister, Theresa May

As part of the Federation’s regular correspondence with the UK Government on the Cyprus issue, Mr Karaolis also wrote to the Prime Minister. The letter emphasised that Britain, as a guarantor power, can play an active and positive role towards the reunification of Cyprus. Mr Karaolis also asked the Prime Minister to ensure that the Republic of Cyprus’ sovereign right to explore and exploit its natural resources in its Exclusive Economic Zone was respected by Turkey amid further threats made by President Erdogan as recently as last week. Furthermore, Mr Karaolis requested that the UK publicly calls for the abolition of the guarantor system and for the removal of foreign troops from the Republic of Cyprus, which he said would be a “significant and valuable contribution” by the UK Government.

Speaking at the demonstration, Mr Karaolis said that “Turkey’s intransigence is the biggest obstacle to a free, united Cyprus that will benefit all Cypriots and ensure prosperity for the island.” He added that President Anastasiades has repeatedly expressed his readiness to re-commence negotiations from where they were left in Crans Montana in July 2017.

Mr Karaolis condemned Turkey’s recent rhetoric towards Cyprus, particularly the threatening remarks regarding Cyprus’ sovereign right to exploit its natural resources in its EEZ. Mr Karaolis said that “Cyprus must not have its sovereign right to explore and exploit the natural resources in its Exclusive Economic Zone impeded by Turkey. The international community must do more to show Turkey that this aggressive behaviour is simply unacceptable”.

UK Cypriots and students travelled from across London and from as far as Southampton, Manchester, Birmingham, Southend, Leicester and Essex to show their support for a free, united Cyprus.

During the demonstration in London, the UK Cypriot community called on Turkey to: