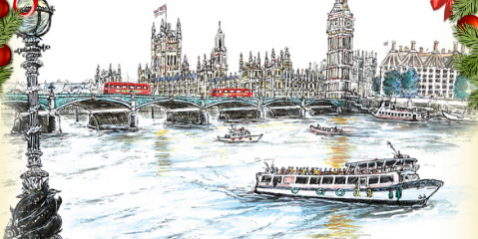 At this special time of the year, I’d like to take the opportunity to wish you and your families a Merry Christmas and a Happy New Year. UK Cypriots are celebrating across the country and I send our very best wishes as you do so. I’m delighted to have had the opportunity to meet so many of our thriving communities in 2018 through visits across London, Manchester, Birmingham and Margate – which I visited with Archbishop Gregorios of Thyateira and Great Britain, who recently celebrated his 90th birthday and 30th year as Archbishop.

With Christmas and the New Year just around the corner, and a particularly turbulent year in the UK and Cyprus, I believe that we should all take the time to reflect on the previous 12 months. As we reflect, we should both celebrate but also crucially, learn lessons, as we move forward.

As your Federation, we’ve continued to represent and advance our community’s interests and views at the very highest levels. We’ve discussed issues of importance to our community with Government Ministers, Shadow Ministers, as well as representatives of other political parties and Members of Parliament. We met with the newly appointed UK High Commissioner to Cyprus, Mr Stephen Lillie, and also hosted Cypriot Government Officials, including H.E. The President of the Republic of Cyprus, Nikos Anastasiades and H.E. President of the House of Representatives, Demetris Syllouris.

This year, for the first time, we used online grass roots campaigning to amplify the voice of our diaspora. Our community made its voice heard in March this year, when Turkey’s illegal actions blocked exploration in Cyprus’ Exclusive Economic Zone (EEZ). An online campaign resulted in 3,000 emails & letters being sent to the Foreign Office, in little over two weeks. We received an open response from Sir Alan Duncan MP, Minister for Europe, which confirmed that “[UK Government] want to see exploration go ahead.”  The campaign also prompted statements in support of Cyprus’ sovereign rights from the Labour Party, Liberal Democrats and All-Party Parliamentary Group for Cyprus.

On the tragic anniversary of the Turkish invasion, in July this year, as well to our annual parliamentary reception (read more), our community sent a clear message to its elected Members of Parliament that Turkey needs to take its hands off Cyprus and end its occupation of over a third of the island. Our #HandsOffCyprus campaign saw Federation representatives visit Greek schools and community events to talk to UK Cypriots across the country. Our campaign was also supported by Barbaros Sansal, a Turkish human rights activist, who has suffered brutal treatment under President Erdogan’s increasingly authoritarian policies in the occupied part of Cyprus. As a result of the campaign, over 41% of MPs received emails from their constituents calling for Turkey to take its hands off Cyprus. Following this grassroots campaign, we received statements from the Government, Opposition, other British political parties and the APPG for Cyprus, with some welcome positions especially on the issue of security and guarantees that you can read here. A number of MPs also recorded video messages for our community on the anniversary of the illegal invasion (watch here)

Thank you to everyone who took the time to participate in these campaigns. We’ve shown that when we are united and make our voice heard, we can make a real difference. However, I’m confident that we can achieve even more.

As well as advocating on the Cyprus issue, we have also actively engaged with our community on issues of importance that are much closer to home – namely the process of obtaining Cypriot citizenship and Brexit. Our recent representative opinion poll showed that 81% of UK Cypriots are highly likely to apply for Cypriot citizenship, however a large majority are unclear about the process, criteria or requirements. The Cyprus High Commission has already taken significant steps to improve the application process at the Consulate. We are in active dialogues with Cypriot Government Ministers and Officials about further improvements to streamline the process and to clarify the citizenship criteria. Additionally, 83% of UK Cypriots support remain and a referendum on the final Brexit deal.

This year we have continued to deepen relations with other diasporas and have held joint events with the Jewish community, ‘A Celebration of Cypriot and Jewish Communities in the Commonwealth’ where H.E. the Foreign Minister of Cyprus, Nikos Christodoulides was the Guest Speaker; and with theUK Egyptian and Greek communities, as part of ‘Nostos II’ where we were joined by Presidential Commissioner Photis Photiou, Deputy Foreign Minister of Greece Terens Quick, and Egyptian Minister for Expatriate Affairs Nabila Makram.

At this time of year, our minds also turn to those less fortunate than ourselves. It is often said that the mark of a society is how it treats those at the twilight and dawn of life. It is for this reason that I am particularly proud of our community’s charitable efforts and especially NEPOMAK UK, our youth, over this year. NEPOMAK UK has coordinated UK Cypriots in London, Birmingham, Manchester, Leicester, Cardiff and Mansfield to send 1200 presents to less fortunate children in Cyprus and enclaved children in Rizokarpasso. In September, members of NEPOMAK UK completed the Welsh Three Peaks Challenge and raised £2,200 to be shared between two important community charities; the Thalassemia International Federation and the Cypriot Community Centre of Wood Green, which provides meals for the elderly.

These are just a small snippet of our activities and those of our 80+ member organisations over the last 12 months. Whilst I’m proud of our achievements this year, we all need to re-double our efforts as we write next year’s chapter in our history. 2019 tragically marks the 45th anniversary of the illegal invasion of Cyprus by Turkey and we should spare a thought this Christmas for those who gave their lives for the freedom of our beloved Cyprus, refugees of the invasion, the enclaved and those who are still missing from the invasion in 1974. There will also be important developments on Brexit and as a Federation we will continue to represent the community as we learn further details. More than ever before, we must look at what we can all do differently – whether that is opening a dialogue with your local MP about Cyprus; actively participating in the Federation’s email campaigns; engaging with the political party that you support; or donating to support our activities. We must stay the course and honour the promises to our parents, grandparents, and children to deliver freedom for Cyprus.

Let’s make 2019, the year that we all renew our campaign and commitment for a free, united Cyprus and continue to collectively advance and promote our UK Cypriot community.

Visit of the President of the Republic of Cyprus, Nikos Anastasiades

Visit of the President of the House of Representatives, Demetris Syllouris

All Party Parliamentary Group for Cyprus statement about Cyprus’ EEZ

Video: Messages from MPs on the anniversary of the illegal invasion by Turkey

’A Celebration of Cypriot and Jewish Communities in the Commonwealth’