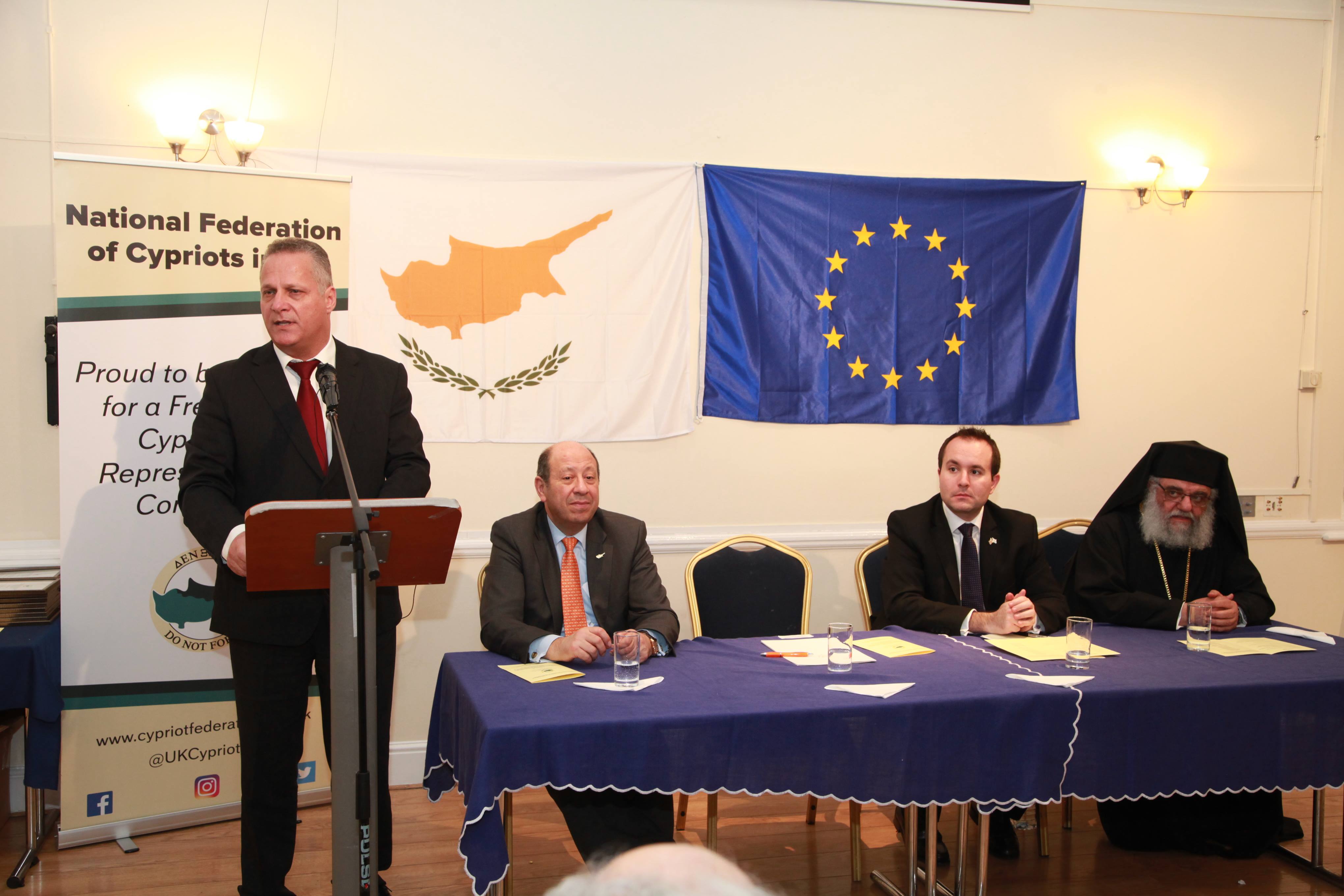 All the speakers, warmly congratulated the Cypriot Educational Mission (KEA) and Maria Papalouca on the commendable mark of the 50th anniversary of the arrival of the first members of the Cypriot Educational Mission in Britain in October 1969 and the initiative of the Federation to formally mark and thank the Ministry of Education and all the Cypriot Governments, as well as highlighting the multifaceted and rich, cultural and educational work that teachers perform in Greek community education .

The main speaker was the Minister of Education and Culture, Mr. Kostas Champiaouris, who said: “Within the difficult and complex world of modern life we ​​live in and in which our children grow up, inner power and faith is the greatest gift we can give them. This power is cultivated by the family, the church and the school. The Cypriot Educational Mission assumes this role and works to preserve the national and cultural identity of our young people, primarily through the learning of the Greek language, which carries through the centuries of history, the pain but also the wealth and power of our people. The learning and use of the Greek language, as well as the knowledge of important elements of history, our Greek Orthodox religion and our culture, along with the experience of morals and customs and the learning of traditional dances and songs of our country, constitute the most important work Cypriot Educational Mission in our community schools. “

He continued by confirming that “The mission of teachers in the schools of the community, the staffing of the Cypriot Educational Mission and the supply of Greek community schools with free books and educational material are a top priority of our Ministry.”

He also acknowledged “the great efforts made by the Holy Archbishopric of Thyateira and Great Britain, the organised community parents and other institutions to preserve the national, religious and cultural identity of the children, and to whom I extend sincere thanks, promising that we are always helpers in their efforts.”

He concluded his speech with the promise of “a continuing presence of the Cypriot Educational Mission in the United Kingdom and our support for Greek community education. I look forward to continuing our sincere cooperation to maximize the efficiency of our Greek community schools.”

Christos Karaolis, President of the Federation, expressed his “warm congratulations to the Honourable Teachers of the Cyprus Educational Mission and he thanked the hundreds of teachers who served for dozens of years in Greek community schools.” Addressing the Minister of Education and Culture, Mr Kostas Champiaouris he said:

“I am sure you know better than all of us the educational work and the multifaceted offering of KEA. It has been successful thanks to the guardian of our Greek Orthodox tradition, who is the President of the EFEPE, our wise Archbishop Gregorios, and thanks to the fact that the heads and members of KEA cooperate closely with the educational bodies KES, OSESKA, EESA, EESL, with their parents, organizations and committees and above all because they love the children and their mission. The National Federation of Cypriots in the UK recognises and honours KEA’s work by hosting this event this event, to mark 50 years of educational work. We also remember and thank the hundreds of educational members of the Greek Education Mission, who throughout the years have taught thousands of children. We also thank all the teachers who, under very difficult circumstances, have worked hard to keep our community schools organised and efficient.

He sincerely thanked all the Presidents and Ministers of Education of the Republic of Cyprus, for the ongoing support they have offered the Cypriot community in the UK.

He concluded that the Federation will continue “the close cooperation with our Eminence Archbishop and the Church, as well as with KEA, our educational institutions and our organisations for the advancement and development of the Cypriot community and the preservation of the identity of our expatriates.”

High Commissioner Euripides Evriviades welcomed the initiative of the National Federation to organise an event to commemorate the Cypriot Government’s contribution to our community through the Cyprus Educational Mission. During these 50 years, hundreds of teachers relocated to Great Britain from Cyprus. They are educators in the broader sense of the term, as their duties are not limited to the two-hour or three-hour language course. At the same time, however, we ought to emphasise the struggles of the educational community of the parish schools, the educational institutions and the school parents’ committees, the overwhelming sacrifice with which they maintain and promote the institution of community education. Of vital importance, of course, is the action of the EFEPE, chaired by Archbishop Gregorios. Despite the occasional adversity, Cyprus never abandoned the institution of community education. KEA may have changed form and composition over the years but remains faithful to its spiritual struggle and its mission. KEA and the Greek community schools are among the sophisticated pillars of the linguistic and cultural survival of the Greek community. Therefore, it is our duty to protect this institution, to keep it as the eyebrow of an eye, and to reward on every occasion the people who serve it. Through them, we preserve our ancestral roots, our traditions, our history, our language.

He concluded his speech quoting poetry of the Nobel Prize-winning poet Odysseas Elytis.

In her greeting, the Director of KEA, Maria Papalouca, thanked the National Federation for this honorary event. She stressed that KEA teachers coming from Cyprus to serve in the schools of the community are working for to teach the children of our community Greek language, Greek Orthodox religion, history and culture but also to help them connect emotionally to the Cyprus and to feel proud of their origins. She added:

“In their work teachers encounter difficult working conditions. Our school hours are nothing but “normal”. At school, KEA teachers take on the lion’s share of responsibilities as they are the teachers of the mission and must meet the demands of the school committees. For this year, KEA consists of a Director and 24 teachers who teach in various UK cities such as Bristol, Brighton, Birmingham, Milton Keynes, Luton, Leeds, Maidstone, Hastings, Eastbourne, Exeter, Winsor, Plymouth and of course London and its wider area. KEA teachers work in 72 community schools. Each year, books adapted for our community, as well as other educational material, are printed and sent to the 6000 pupils.”

She then referred to the many different activities undertaken by the teachers, such as the theatre and music workshops at the Greek Cypriot Brotherhood, the weekly Radio Program on LGR, the Bilingual Newsletter and others. She also referred to educational seminars, meetings, events, celebrations, book presentations and various cooperation’s with various organisations in the community. She stressed the regular communication for continuous briefing with the High Commission, our Archbishop and President of EFEPE, the Greek Education Mission and NFC.

Finally, she thanked the Minister of Education and Culture, Mr. Kostas Champiaouris, for the mission of the KEA and the Director of Primary Education, Mr. Christos Hadjiathanassiou, for his continued support, as well as the President of the National Federation of Cypriots in the UK Mr. Christos Karaolis, for the official thanks of the organised community in the presence of the Minister of Education and Culture, a representative of the Republic of Cyprus, in recognition of the long-term offer of the KEA to the Cypriot community and wished that KEA continued its mission for the community for many years.

The first director of KEA (1969-1972) Adam Adamantos, stressed the many and great difficulties faced by the first group of 4 teachers, to whom two others were added at a later stage. He spoke about the preparation of lessons and educational material that he did not only in London schools but also in other cities as well as in organising school events and seminars on teacher education. Unfortunately, he said, the junta of Athens requested and succeeded the resignation of the then Minister of Education and the members of KEA were recall to Cyprus in August 1972.

The representative of Archbishop Gregorios, Bishop Tropaiou Athanasios thanked the Republic of Cyprus and the Ministry of Education and Culture for their timeless and communal education, congratulating teachers for the rich national and social work and their great contribution in the preservation of the Hellenic identity of the Hellenes in Britain. He concluded his speech with a quote from what Alexander the Great said about his teacher Aristotle.

Following the speeches, the children of the Theatrical and Musical Workshop of the KEA recited the poems “Ston Daskalo” and “O Mikros Mathitis” and sang “To Mikro mou Alfavitari” “Chrisoprasino Fillo” and “ Yiasou Kirie Menexe”.

Honorary diplomas were given to the families of the late Andreas Mitropanous, Giorgos Karagiannis, Glafko Violaris, and Michalakis Christodoulides. A diploma was also given to the KEA teachers for the School Year 2018-2019.

A reception followed where teachers, parents and officials of the Ministry of Education and Culture had the opportunity to exchange views.