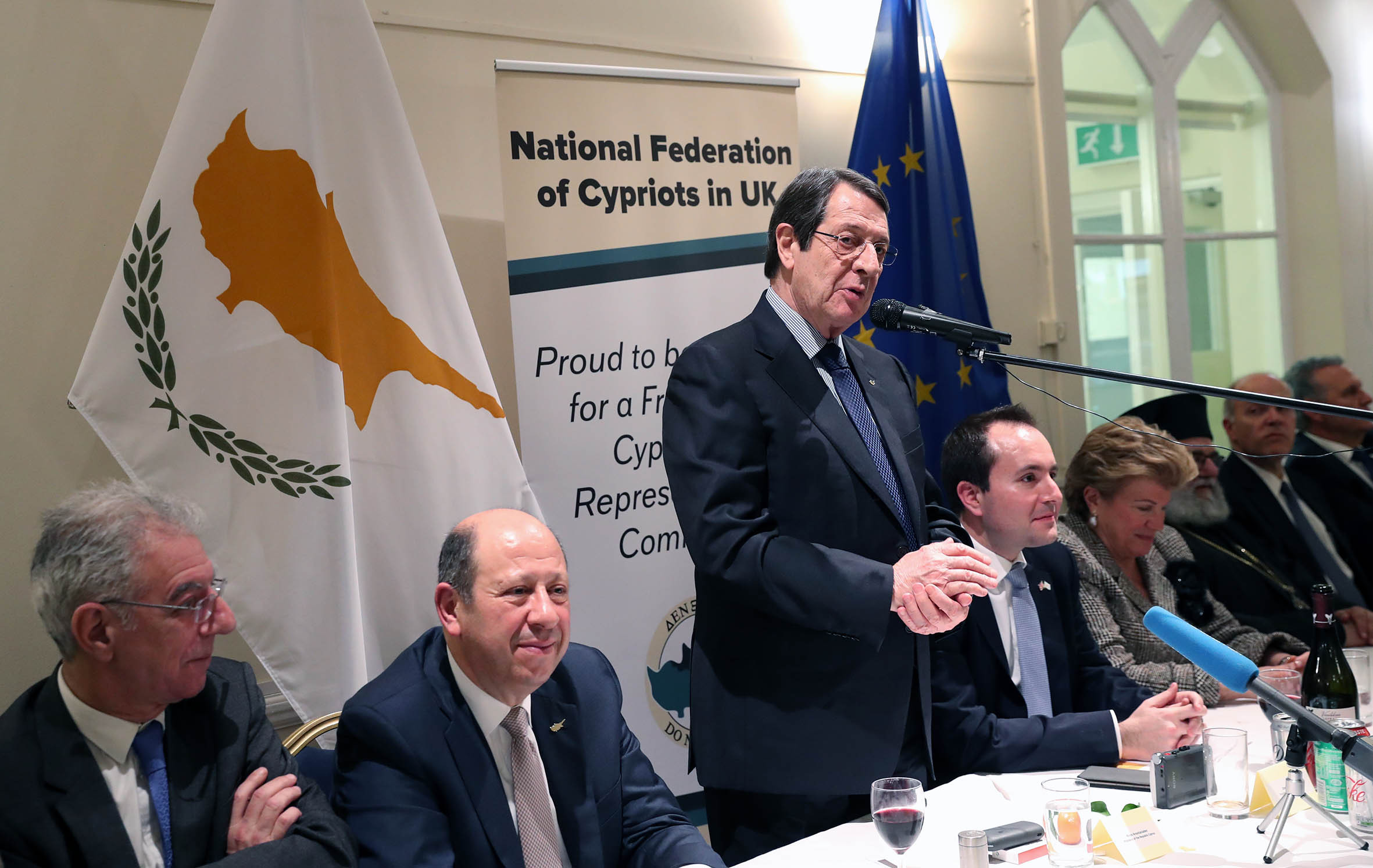 On Sunday 3 March, the National Federation of Cypriots in the UK hosted H.E. President of the Republic of Cyprus, Nicos Anastasiades, for a working dinner in his honour on the special occasion of his ‘Guest of Government’ visit to the UK. Representatives from the Federation’s member associations across the UK and invited guests listened to the President’s remarks about the latest developments on the Cyprus issue and his strong words of praise for the immense contribution of UK Cypriots to the UK and to Cyprus.

President Anastasiades said that, “Turkey’s intransigence did not allow us to reach a settlement that would be viable, functional, could stand the test of time, and that could secure an independent and sovereign country that would respect EU principles.” He assured the community that, based on those principles, he is trying to find a way of creating the conditions that would allow an acceptable settlement and emphasised the importance of the next round of negotiations being “well prepared”.

Referring to the specific efforts to resume talks to reunify the island, he said that there have been three meetings between the UN Secretary General’s Special Envoy for Cyprus, Jane Holl Lute and the Cypriot, Greek, British and European sides. He informed the community that “we are awaiting the outcomes of the third meeting between Ms Lute and Turkey because a lot will depend on what will be said in that meeting, but also on what the terms of reference will entail.”

He then stressed the significance of the content of the terms of reference (the parameters for the next set of reunification negotiations), saying that it is important that they are based on the terms discussed at the Crans Montana morning meeting of 4 July 2017. With regards to that meeting he raised strong concerns about the fact that no official UN minutes of that meeting exist and described the subsequent document presented by the then UNSG special adviser as “unacceptable”.

President Anastasiades explained that, “for us to be able to move ahead, to be able to hope for a constructive dialogue, what is required is that the terms of reference not only determine the issues under discussion, but also what is acceptable and what is unacceptable. And we have agreed with the Turkish Cypriot leader in the past, and it is a principle that has been accepted by the UNSG, that one side’s security cannot constitute a threat for the other side.”

He elaborated by saying that he could not accept the Turkish Cypriot side’s latest demands that they havea Turkish Cypriot positive voteon all federal decisions would result in a dysfunctional state. The President reinforced his view that political equality and effective participation are accepted but only to the extent that they would be “reasonable” and logical, i.e. where a decision by a larger community would negatively impact a smaller community.

President Anastasiades also spoke about the multi-dimensional foreign policy that Cyprus has been building, focussing on developing excellent relations with major countries around the world and particularly with its neighbours in the eastern Mediterranean region through various trilateral initiatives. He referenced the significant recent news that the US Secretary of State would be attending the Cyprus-Greece-Israel trilateral meeting in a few weeks’ time.

President Anastasiades began his speech by praising the National Federation of Cypriots in the UK and the wider UK Cypriot diaspora for their tireless work on behalf of Cyprus, including campaigning for a free, united Cyprus and expressed his confidence that through NEPOMAK the next generations of diaspora Cypriots will continue this effort. The President warmly praised the strong presence of younger Cypriots, from NEPOMAK UK, and said he was pleased to see so many successful and distinguished UK Cypriots from a variety of fields, including the Anglican Church, business, the City, broadcasting, journalism, arts, medicine and politics.

In his introductory remarks the President of the Federation, Christos Karaolis, said that “we are determined that the Turkish occupation of Cyprus will not need to transcend to any further generations, but for as long as it does, we will continue to do our utmost to achieve a solution that is viable; secures the withdrawal of the Turkish troops and setters; ends the anachronistic system of guarantees and respects the human rights of all Cypriots, reuniting our beloved island, so that Greek Cypriots, Turkish Cypriots, Maronites, Armenians and Latins, can live and prosper together.”

He went on to share the successes of the Federation’s 2018 campaign efforts regarding Turkey’s illegal actions in Cyprus’ EEZ, as well as to mark the anniversary of the illegal Turkish in July 1974. The Federation President also went on to thank H.E the High Commissioner of the Republic of Cyprus, Euripides Evriviades, for his tireless and successful efforts over the last 6 years that have made Cyprus’ presence more pronounced in decision-making centres across the UK.

He also spoke of the importance and significance of having an organised Cypriot community and said “our Federation unites the community and its leaders, of all political parties and no political party, by identifying the common ground and coordinating our efforts. In doing so, we visibly demonstrate that on the Cyprus issue, there are no parties, no personal interests and no divisions. We have one party, and that is Cyprus.”