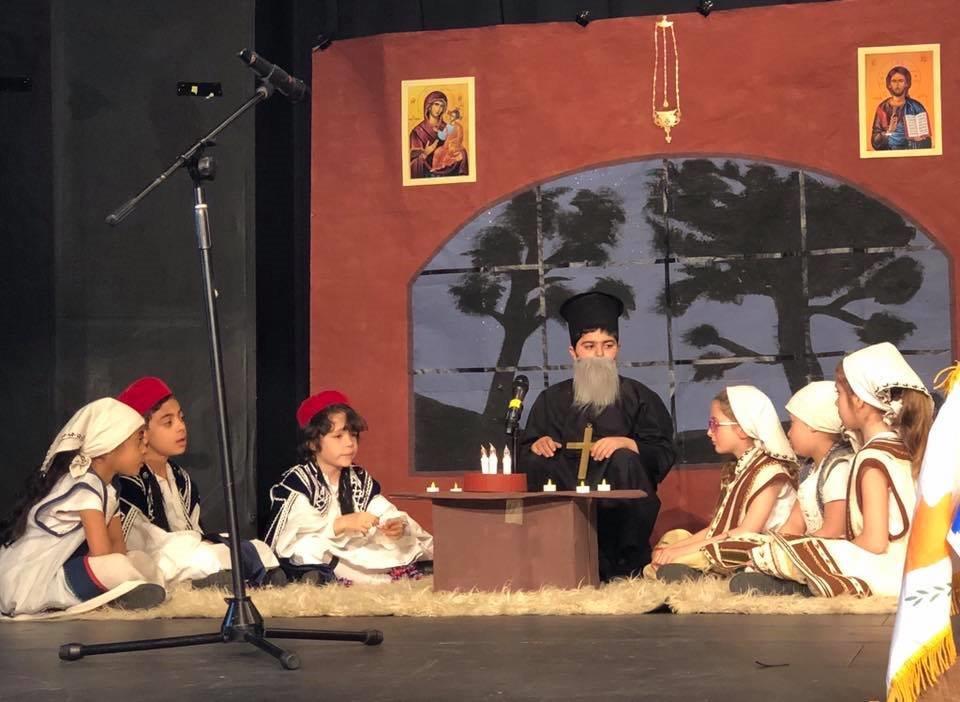 A community-wide celebration, organised by the National Federation of Cypriots in the UK, was held at Ashmole Academy in North London on Sunday 31 March to mark Greek Independence Day (25 March 1821) and the start of EOKA’s anti-colonial campaign (1 April 1955).

The guest speaker at the event was Kypros Nicolaides, a professor and pioneer of embryonic medicine and director of Harris Birthright Center. Brief greetings were given by Christos Karaolis, President of the National Federation of Cypriots; Demetrios Caramitsos-Tziras, Ambassador of Greece to the UK; Euripides Evriviades, High Commissioner for Cyprus to the UK; Archbishop Gregorios of Thyateira and Great Britain; and Marios Minaides, President of the Greek Orthodox Communities in the UK.

In his keynote speech, Mr Nicolaides said that, “despite four hundred years of slavery under Ottoman rule, Hellenism did not bend, did not forget, and did not bow. The example of the Revolution of 1821 showed everyone that no matter how many years pass, Greeks will not tolerate slavery… All nations were compelled to respect the incomparable soul of the Greeks as well as their spirit and heroism. The Greeks of 1821 overturned a major power of the time and ‘became masters of their land’ which was rightfully theirs.” 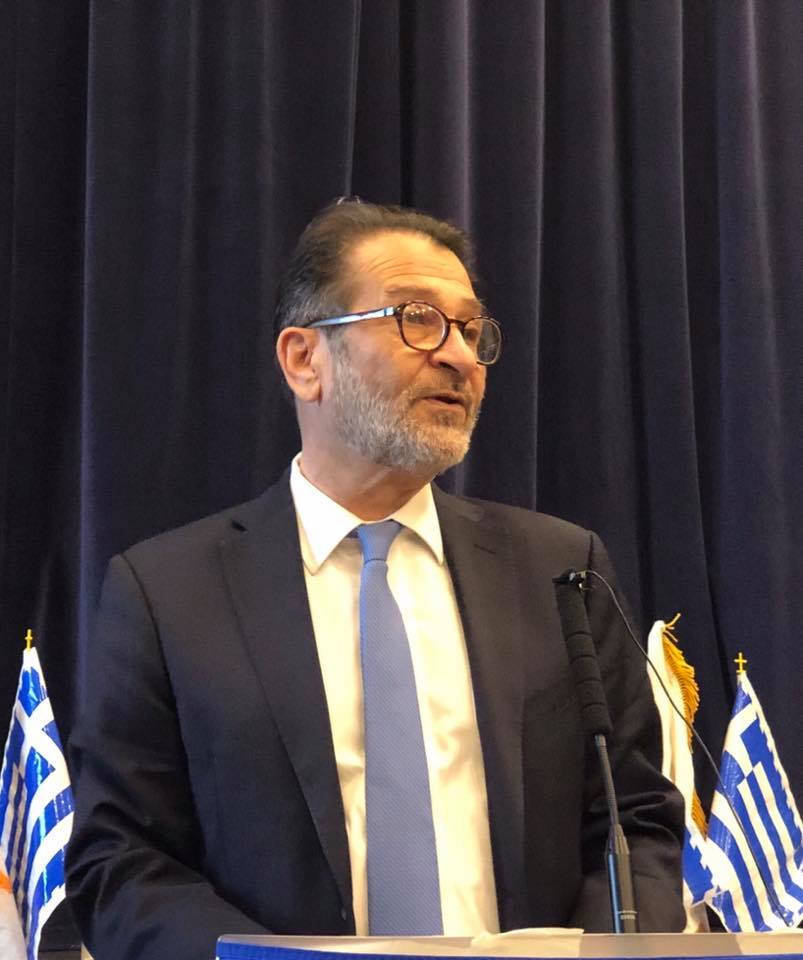 Mr Nicolaides also paid tribute to the liberation struggle of EOKA from 1955-59 and said, “that struggle against British colonialism wrote its own golden page in Greek history.” He explained that the example of the heroes of ‘21 was followed by the young people of Cyprus in 1955: “Inspired by the ideals of freedom, they imitated their ancestors with spirit and courage and took their own uphill battle, one born by the bones of ’21 and transplanted into the heart and soul of the young Pallikarides, Afxentiou, Matsis, Karaolis and so many others who were martyred to free our little homeland [Cyprus].”

Mr Nicolaides reminded the audience of a poignant lesson, “our history does not, however, only give us examples to be followed, but also examples to be avoided. Discord, when it prevailed among us, resulted in defeat and destruction. Unfortunately, even in modern history we learned from the mistakes of the past, culminating in the treacherous coup that gave Turkey the chance to return to Cyprus again as a conqueror and invader.” He continued, “for 45 years, ladies and gentlemen, we are struggling to end the Turkish occupation of the northern part of our island, seeking a functional, democratic solution for all, Greek Cypriots and Turkish Cypriots. A solution that is in line with European standards and frees our island from its occupying army and settlers, without guarantees nor ‘guardians’. Unfortunately, Turkish intransigence all these 45 years has not allowed to find a solution that guarantees the human and political rights of the legitimate inhabitants of the island, a solution that allows Cyprus to go the path of freedom and prosperity.”

He concluded his remarks by saying, “we face today the wall of occupation and Turkey’s expansionist policy in the Aegean and the Eastern Mediterranean, but Hellenism is no longer obedient nor obstructed. Today, Greece and Cyprus are able to defend their values with prudence and determination. By building valuable regional alliances, they defend themselves through a community of interests with other states and geopolitical allies. As a diaspora, we need a solid political line, clear goals and a demanding policy to make our struggle a success. Something that is exemplified by our two national anniversaries.”

The President of the National Federation of Cypriots, Christos Karaolis, welcomed and thanked Mr Nicolaides and the distinguished guests and said that, “Today, we celebrate the glorious anniversaries of 25 March 1821 and 1 April 1955… It has been 198 years since our ancestors began their uphill struggle for freedom from 400 years of slavery with the slogan “Μολών Λαβέ” (“Freedom or Death”). 64 years have passed since the young lads of Cyprus fought in the cities, the villages, the mountains and the basins of Cyprus and marched towards immortality with the heroic EOKA struggle of 1955-59. Today we honour all those who sacrificed their own lives for us to live free.”

Mr Karaolis continued, “President Anastasiades is working hard to restart the talks to reunify Cyprus and both he and the political leadership of Cyprus cannot accept the continued occupation of over a third of Cyprus and Turkey’s pursuit to control the entire island. With the help of our prominent High Commissioner for Cyprus, Euripides Evriviades, the tireless Ambassador of Greece, Demetrios Caramitsos-Tziras and our many other friends, we are continually improving our efforts for Cyprus. We consistently demand that the British Government honours its obligations to Cyprus to help secure the end of Turkey’s occupation and to ensure that we see a free, united Cyprus without outdated guarantors nor occupying foreign troops so that Cyprus and all its legal inhabitants, irrespective of race or religion, will enjoy the benefits that peace and prosperity will bring.”

The High Commissioner for Cyprus in his brief greeting, used the occasion of Mothering Sunday to pay tribute to the important role of mothers in our culture and particularly in preserving our customs and identity. He stressed that, “the diaspora have long held the flag of our nation by paying tribute to our story, to our poets, to our heroes.” He said continued, “you have Hellenism in your heart and proudly transmit your language, religion, morals, customs to your children. Above all, however, with your remarkable insistence on spiritual and cultural resistance, you are a practical proof that Freedom is a matter of courage as well as of virtue.”

The Ambassador of Greece spoke about the symbolism and importance of having a common celebration for both 25 March 1821 and 1 April 1955. He said it is “especially important nowadays, where our national issues are undergoing tensions.” He said that in his recent trip to Cyprus he had the opportunity to hear about the “grave hardships still felt, 45 years later, by refugees and those who suffered the Turkish invasion and occupation” but that he “admired the endurance, determination and creativity of Cypriot Hellenism” and felt proud as a Greek.

The Ambassador paid tribute to the High Commissioner for Cyprus, who will retire this year, for his immense efforts, support, friendship and cooperation. He concluded with warm words for the collective action of the Federation, which “systematically and tirelessly promotes common goals”, as well as for the work of smaller Greek organizations and institutions that promote Greece in Britain.

In his remarks, the President of the Greek Orthodox Communities in the UK, Marios Minaides said that: “The Anniversaries of 25 March 1821 and 1 April 1955, are brilliant landmarks of contemporary Greek history, from which we draw lessons of courage, bravery, selflessness and self-sacrifice.” He also said that “in multicultural societies and a globalist world, Hellenism must be preserved” and concluded by hoping that, “in 2019, Cyprus, the island of the Saints, will be reunified with a fair, viable and functional solution so that all Cypriots can live together freely and peacefully and enjoy all human rights and democratic freedoms.”

The President of the Federation, Mr Nicolaides, the High Commissioner for Cyprus and the Ambassador of Greece awarded certificates to the children of the Greek community schools that had participated in the annual art competition about 1821 and 1955, coordinated by the Federation.

Certificates were given to: Christos Ametsi, aged 13; Antonis Tsiolas, 11; Maria Fouli, 8; Zoe Evangeli, 11; Nadia Katzio, 7; Antonia Mina, 10; Elliot Wheatley, 11; Anastasia Evangeli, 13; Christopher Iakovou, 7; Maria Tekki, 14; Nikoletta Hambou, 13; Anna Erotokritou, 6; Michaela Savva, 11; and Maria Andreou, 11. Some of the art was featured in the programme that was released on the day of the celebration.

Also in attendance at the event were the Consul General of Cyprus to the UK, Theodoros Gotsis; representatives of the Greek Embassy and the Cyprus High Commission; President of POMAK, Andreas Papaevripides; President of NEPOMAK, Christos Tuton; members of the Executive and Secretariat of the Federation; the Executive Secretary of the Federation, Andreas Karaolis; chairpersons of educational institutions KES, OESEKA, AESA, AESL, directors and teachers of Greek schools, families and many members of the UK Cypriot community.

The program was presented by the Assistant Executive Secretary of the National Federation, Adrian Patsalos, and KEA teacher, Iliana Konstantinidou. Susie Constantinides and the Federation’s events committee were responsible for the organisation of the event and the artistic programme. Stage and technical support were provided by the Chair of Ashmole Greek School, Nikis Andreou; Christos Tuton: Adrian Patsalos; and Anastasia Ntoumou.