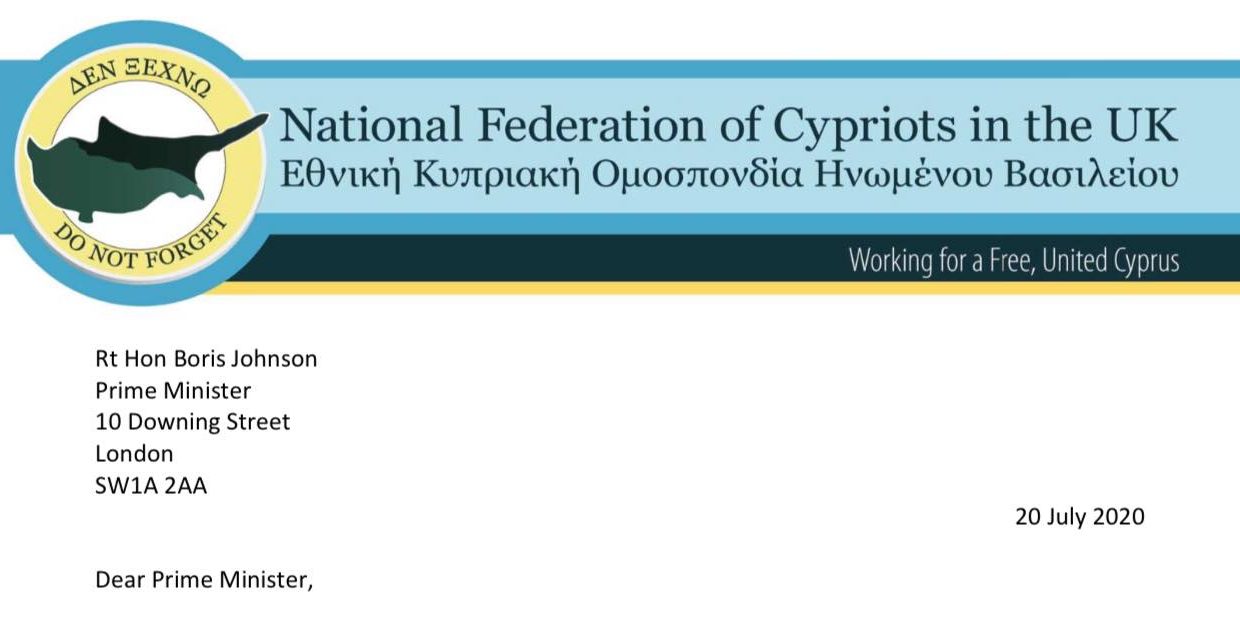 The British Prime Minister is being urged by the National Federation of Cypriots in the UK to exercise “proactively and constructively” the power he has to “make a lasting difference” in relation to Cyprus.

In a letter to be sent to Boris Johnson on Monday 20th July, to mark 46 years since the illegal Turkish invasion of Cyprus and the beginning of the military occupation of the island, the Federation’s President Christos Karaolis underlines the poignancy of this “tragic anniversary” for the UK Cypriot community, “many of whom are refugees and are desperate to return to their homes and to see a free, united Cyprus.”

He laments the fact that still “no resolution to the injustices committed by Turkey on the island has been found” and that Cyprus, a member of the United Nations, the Commonwealth and the European Union, remains divided.

Mr Karaolis also highlights “one of the most tragic consequences of the Turkish invasion”, the people who are still missing. He stresses that Turkey refuses to cooperate fully and has prevented access to certain key areas (for example military camps). “The United Kingdom can make a real contribution on this issue immediately by urging Turkey to release all the information that it has,” notes the Federation President.

He goes to state the belief that a reunited Cyprus where all Cypriots could peacefully live and prosper together is “both attainable and viable”, with a solution that is based on the relevant United Nations Security Council Resolutions and High-Level Agreements.

He adds that the reunification of the island would also further elevate the country as an international and regional hub.

“Unfortunately,” Mr Karaolis writes, “efforts to reunify the island have not yet produced a successful outcome due to Turkey’s continued unacceptable demands about its own influence in a reunified Cyprus. Turkey’s insistence on maintaining a ‘right of unilateral intervention’ and a permanent military presence on the island, subject to a review clause, cannot be accepted as part of the security structure of a modern 21st century country.

“Just as our Government and Parliament opposed the idea of a backstop in the EU Withdrawal Agreement (because it would leave the UK subject to EU rules and regulations without a unilateral right of exit), so the Republic of Cyprus cannot be subject to a security arrangement that does not include a unilateral right of exit, or sunset clause. Cyprus needs a security system that will provide safety for all communities on the island, not one that will enable third countries to continue to exercise influence in a reunited Cyprus.”

Turning his attention to President Erdogan’s role, Christos Karaolis points to the UK Cypriot and the wider international community’s deep concern by the Turkish President’s “increasingly aggressive and authoritarian policies towards Cyprus and the Eastern Mediterranean region”.

As he comments, “46 years ago Turkey invaded Cypriot soil with tanks and today it is invading Cyprus’ Exclusive Economic Zone (EEZ) and Continental Shelf with drill-ships and warships”, in breach of International and European Law and the sovereign rights of the Republic of Cyprus. He welcomes the UK Government’s opposition to the drilling.

The letter then refers to the “crucial” role the UK still plays in relation to Cyprus and the fact that London is also a strategic ally of Turkey, with whom it is currently negotiating a Free Trade Agreement.

Mr Karaolis points out that “Ankara ought to realise that the only way to deal with the problems she herself creates, is through a decisive and constructive dialogue that will lead us to a solution based on the relevant UN Resolutions, High level Agreements and the principles upon which the United Nations were founded”.

“Over the last forty-six years the world has changed enormously, and the UK has played a positive role in advancing and defending the principles of justice, human rights, democracy and international law. The Foreign Secretary made clear earlier this month that as the UK leaves the EU that the Government is “absolutely committed to the United Kingdom being an even stronger force for good in the world”. The UK Government has led the international community’s response to acts of aggression by other countries, therefore we urge our Government to consider the actions that it can take to encourage Turkey to respect Human Rights and the Rule of Law and to engage constructively to find a solution that reunites Cyprus and its people”, the Federation President urges the UK Prime Minister.

Mr Karaolis also reassures Mr Johnson that the Federation is doing its utmost to support the most vulnerable British Citizens of Cypriot origin during the coronavirus pandemic.