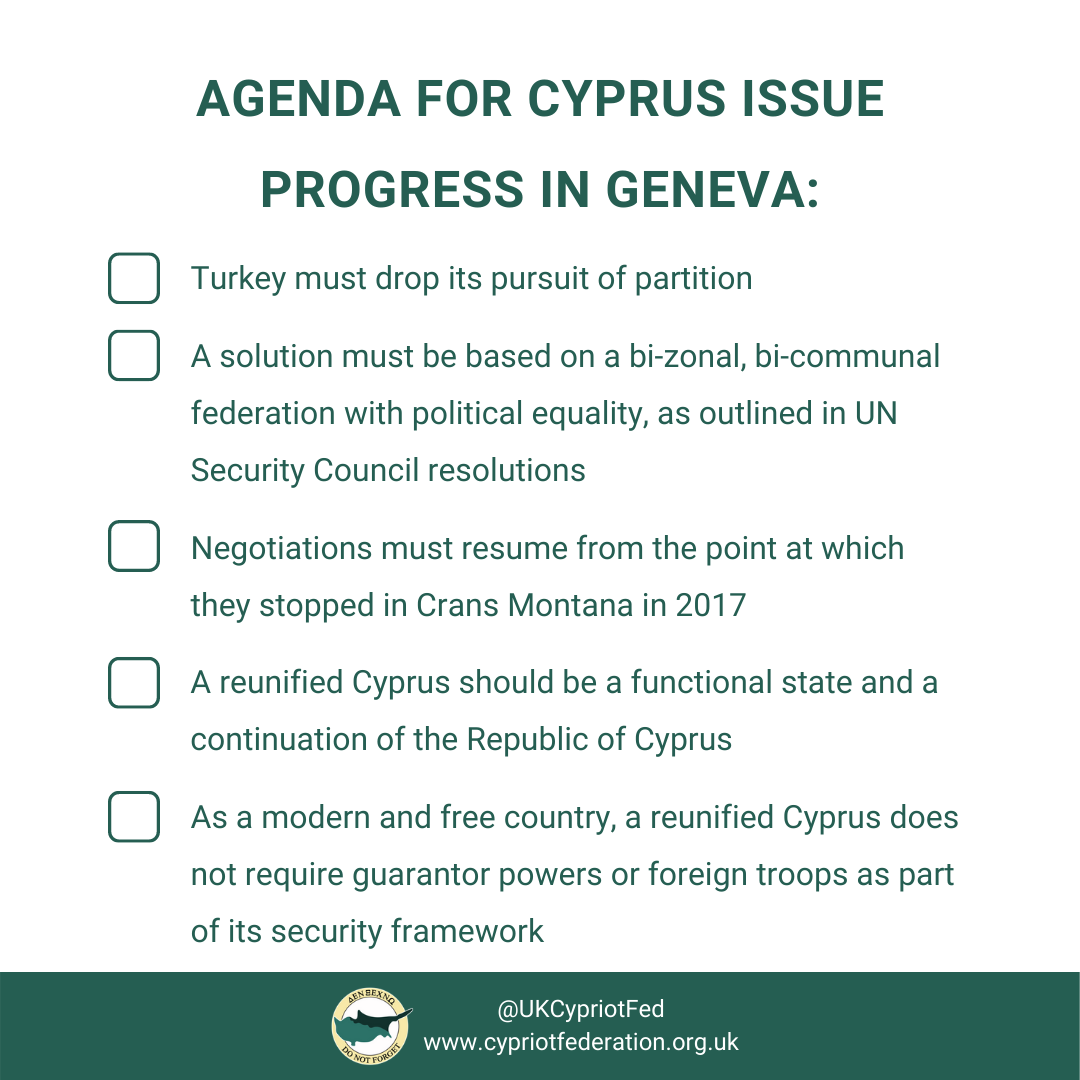 As the informal meeting on Cyprus gets underway in Geneva today, the Federation, Labour Party and Theresa Villiers MP have outlined their hopes for progress towards reunification.

The Federation published an agenda for the meeting that would help achieve the required progress:

As the informal 5+UN meeting on #Cyprus begins in Geneva tomorrow, we are hopeful that there will be progress towards a #FreeUnitedCyprus. Here is our agenda to achieve that progress ? pic.twitter.com/zqRoreWdfO

— National Federation of Cypriots in the UK (@UKCypriotFed) April 26, 2021

Labour sets out three tests for the UK Government in Geneva

The Labour Party has set out three tests for the UK Governments ahead of the talks. They say that, “to ensure a lasting and just settlement for the island of Cyprus, the UK Government must:

“These talks are a crucial opportunity to make progress towards a political settlement for the island of Cyprus. As a guarantor power with historic legal commitments to Cyprus, the UK Government has a responsibility to take them seriously.

“It’s vital that the UK Government sticks to its longstanding obligations to the people of Cyprus to ensure both sides can come to a lasting and meaningful political settlement, which is in the interests of regional stability.”

Ahead of the start of the 5+UN talks in Geneva tomorrow, @UKLabour has set out three tests for the UK Government ✅✅✅@FabianLeedsNE: “These talks are a crucial opportunity to make progress towards a political settlement for the island of Cyprus." ? pic.twitter.com/S4396azLO2

— National Federation of Cypriots in the UK (@UKCypriotFed) April 26, 2021

Theresa Villiers, MP for Chipping Barnet and President of Conservative Friends of Cyprus, has also expressed her hopes for for progress at the 5+UN meeting in Geneva this week. Speaking on the eve of the summit, Theresa Villiers said “I wish all the leaders well in their discussions this week. I hope that the meeting will provide new hope for a negotiated settlement and reunification of Cyprus.

“Any settlement must be based on longstanding accepted principles, namely a bi-zonal, bi-communal, federal state, with a single citizenship and a single international personality. Any attempt to formulate a looser confederal arrangement would see permanent division of the island and would never be acceptable.

“Third country guarantees should also be scrapped. These date back to the colonial era and are entirely inappropriate for a modern European democracy like Cyprus. The Foreign Secretary should call on his counterpart in Turkey to withdraw any claim to a continuing guarantee, or any right to take military intervention.

“I welcome the assurance that Dominic Raab has given me that he plans to attend the Geneva talks. When he was Foreign Secretary, Boris Johnson took part in the discussions at Crans Montana. Only Cypriots can provide the solution to reunite their island; but I will always urge UK Ministers to provide every support and encouragement to the two sides, in their efforts to resolve this dispute and reach an agreement.”

Theresa has received the following answers from Europe Minister, Wendy Morton, to her recent urgent Parliamentary Questions on the Geneva talks:

Answer: Wendy Morton: “A Cyprus Settlement is in the best interests of the Cypriot communities, the wider region and the UK. The Foreign Secretary will represent the UK as a Guarantor Power at the UN-led informal five-party talks from 27-29 April. The aim of the meeting – as set out by the UN Secretary General – is to determine whether common ground exists for the parties to negotiate a lasting solution to the Cyprus problem within a foreseeable timeframe. The UK will continue to actively support the UNSG in his effort to this end.