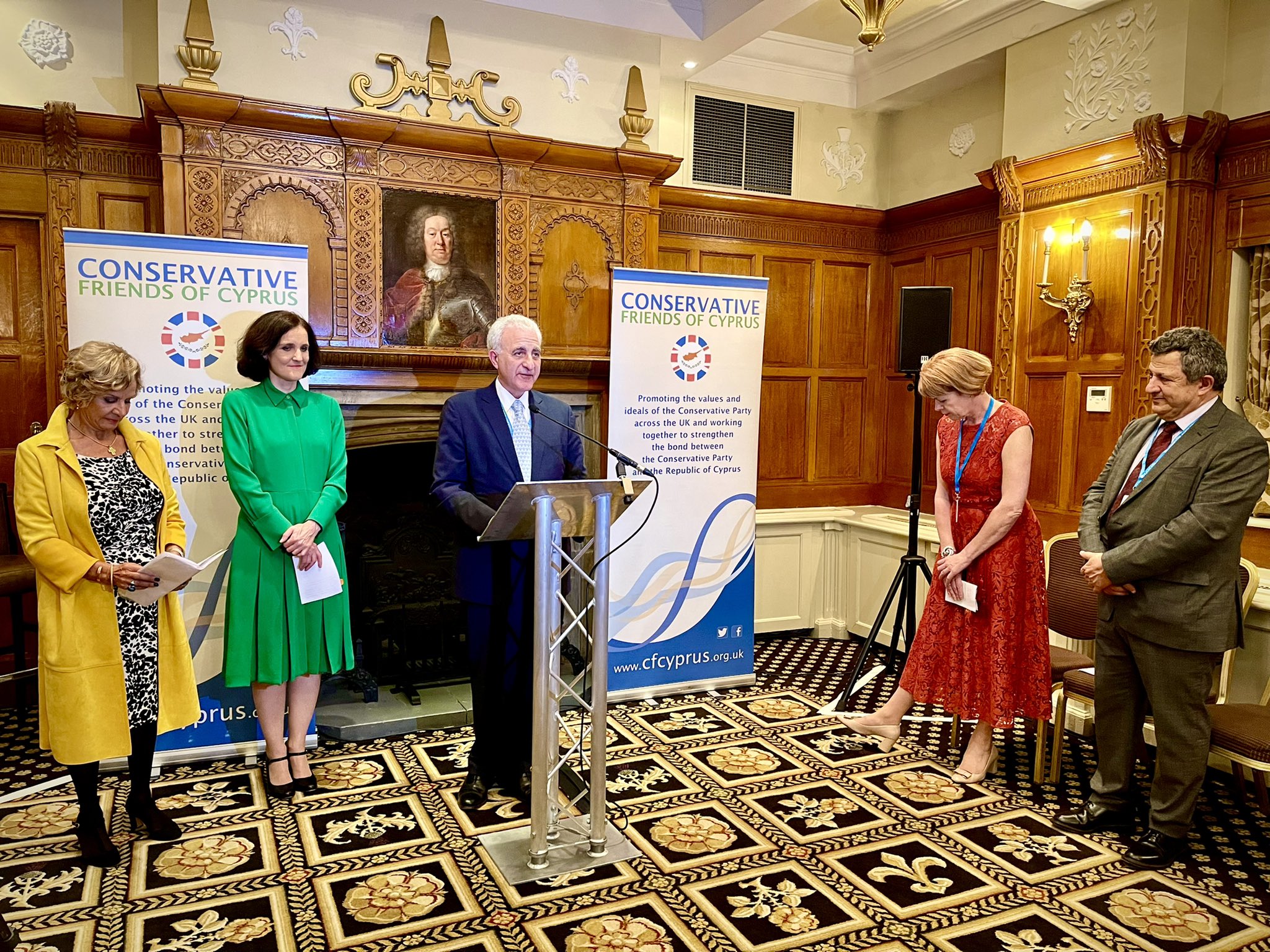 UK’s Minister for the European Neighbourhood Wendy Morton reiterated London’s “unwavering” support for a comprehensive, just and lasting settlement of the Cyprus  issue during the annual ‘Conservative Friends of Cyprus’ reception on the sidelines of the Conservative Party in Manchester.

Addressing the event on Sunday night, Morton said that such settlement should be based on the existing UN parameters of a bizonal, bicommunal federation with political equality. “We do not support a confederation,” she stressed.

She added: “We believe here UN parameters are broad enough and flexible enough to accommodate the Greek Cypriot and the Turkish Cypriot community’s shared interest in a prosperous and secure future. We judge that a solution based on a decentralised federation offers a potential way for both communities to be in control as much as possible of their own affairs within a single state.”

Minister Morton also reaffirmed the UK’s commitment  to support the efforts of the UN Secretary-General to reach a settlement “for the prosperity of Cyprus and the stability of the region”.

In a reference to Turkey’s recent actions in Varosha, she noted that the UK has been clear with the parties that they should avoid any actions that could damage the prospects of a settlement, something that also applies on the issue of hydrocarbons around Cyprus.

She reminded the audience that in response to the announcement made during the visit of President Erdogan to the north of Cyprus in July, the UK issued a National Statement expressing its concern; and that it strongly supported the 23rd July UN Security Council presidential statement which condemned the announcement on Varosha. She then made clear that the UK continues to support the Security Council resolutions on Varosha.

Morton also hailed the historic relations between the UK and Cyprus noting the links in education, defence and culture.

In his address the High Commissioner of the Republic of Cyprus to the UK Andreas Kakouris condemned Ankara’s “more intransigent and bellicose policy and rhetoric”, as expressed in the demand for “two states” in Cyprus and the recognition of the so-called “sovereign equality”. As he noted, “with this position we will not be able to go to the negotiating table.”

He made clear that the settlement framework is well-known, namely a bizonal bicommunal federation with political equality as described in the UN Security Council resolutions with a single citizenship, a single international personality and a single sovereignty.

Addressing the UK Foreign Minister, Kakouris noted that “at this particular time, when this framework is being challenged, the clarity of message from the international community, particularly countries such as the UK, is even more important.” He added that what Turkey has to hear is that the occupation is unacceptable and needs to end as soon as possible.

The President of the Conservative Friends of Cyprus Theresa Villiers MP said that as a former colonial power the UK has “a moral obligation” to give its strongest support to Cypriots in their efforts to secure a negotiated settlement.

She described the fact that the island’s division remains as “scandalous” and she pledged to carry on denouncing the unlawful incursion of Turkey’s drilling ships in the Exclusive Economic Zone of the Republic of Cyprus, as well as calling for the end of the system of guarantees.

She concluded by stressing that “there can be no slippage from the position stated in the UN resolutions that Cyprus stays as one country.”

The event was coordinated by the Conservative Friends of Cyprus Executive Officer Mrs Andre Chris.

Cyprus has been divided since 1974, when Turkish troops invaded and occupied 37% of its territory. Numerous UN backed talks to reunite the island have failed to yield results.