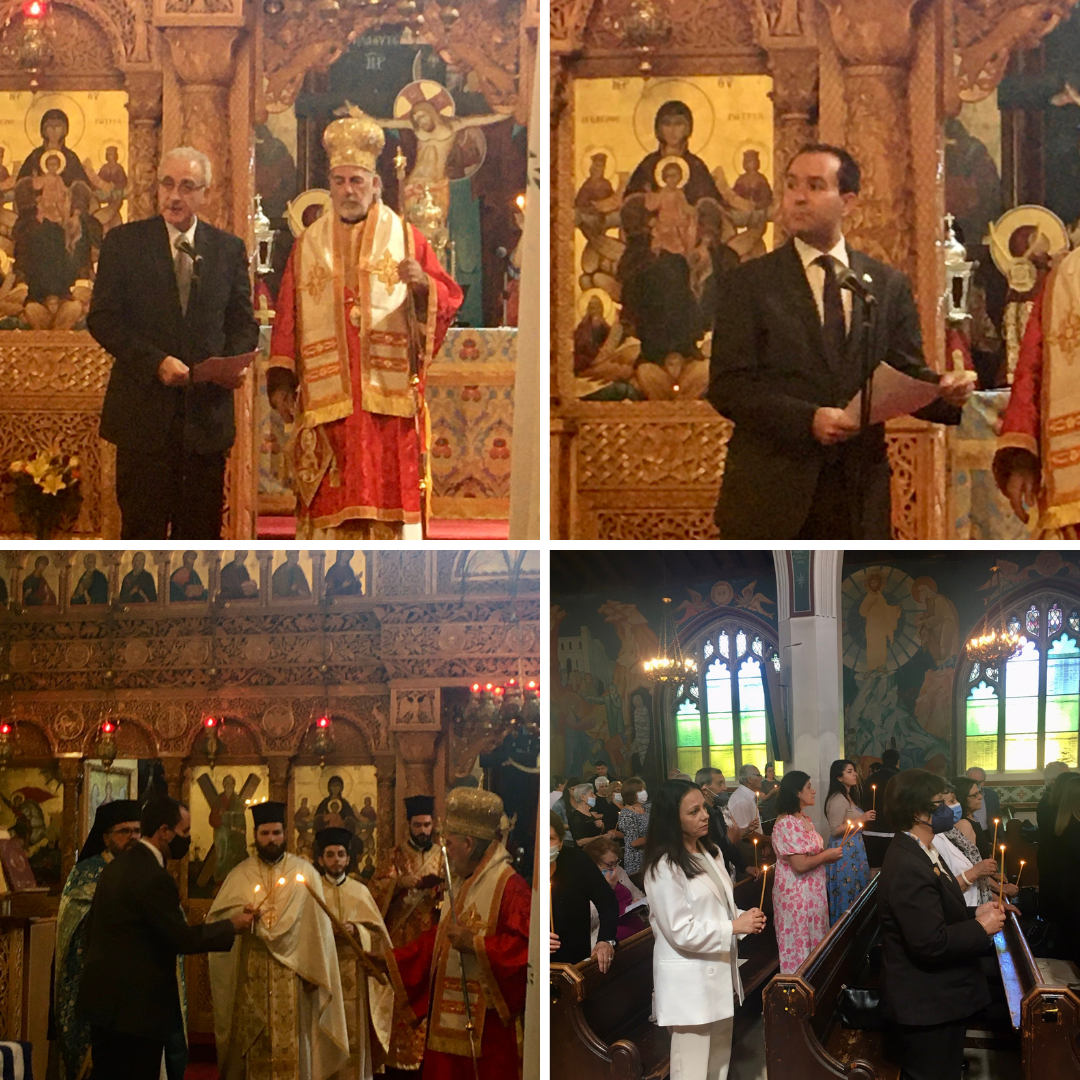 On Sunday 10 July 2022, the Greek Orthodox Archdiocese of Thyateria & Great Britain and the National Federation of Cypriots in the UK organised a memorial service to commemorate those who sacrificed their lives defending the Republic of Cyprus’s sovereignty in 1974, as well as to remember in prayer, our missing compatriots.

Archbishop Nikitas of Thyateira & G.B. officiated the Official Archiepiscopal Memorial Service. The Memoriam Address was given by H.E. the High Commissioner of the Republic of Cyprus to the UK, Mr Andreas Kakouris, and the President of the National Federation of Cypriots in the UK, Mr Christos Karaolis, also addressed the congregation. The service was held at the St John the Baptist Greek Orthodox Church in north London.

In the Memoriam Address, the High Commissioner of the Republic of Cyprus to the UK, Mr Andreas Kakouris, said that “Partition is not an option for Cyprus. A reunified, sovereign and independent Cyprus, can truly become a beacon of peace and a source of stability and hope for the wider region.”

He began his speech, reminding us that “today we commemorate those who heroically fell defending the homeland 48 years ago, during the coup and the invasion of Turkey in 1974. We will also never forget the missing persons of Cyprus and we stand by their families. Together, we have continued the struggle for justice and freedom for our Cyprus.” He paid tribute and expressed his gratitude for the support he receives from the Federation, the Cypriot diaspora and the many friends of Cyprus.

Referring to the latest developments in Cyprus, he said that “both President Erdoğan and his Turkish Cypriot leader Tatar, are constantly expressing their desire for the establishment of two states in Cyprus, ignoring international law and the history of the island.”

He went on to say that “President Anastasiades’ commitment to a comprehensive settlement that will reunite our island based on UN resolutions, as a bi-zonal, bi-communal federation, with political equality as defined in the relevant resolutions, and with a single sovereignty, citizenship and international personality, remains unchanged. On the contrary, Turkey and the occupying regime, seek to further consolidate the partition of Cyprus, with actions such as the recent illegal “openings” of a part of the fenced area of Varosi, in violation of UN Security Council resolutions and blatantly ignoring repeated calls from the international community to end these unilateral actions and immediately reverse them. In addition to the provocative actions on land and sea, they have recently signed the so-called “economic and financial cooperation protocol”; an unprecedented document that actually not only separates but alludes to the annexation of the occupied areas of Cyprus to Turkey.”
Speaking about the illegal Russian invasion of Ukraine, he said that it “brought a huge crisis to Europe and we have witnessed global consequences. It also brought back traumatic memories to the people of Cyprus, including the hundreds of thousands of refugees, those still waiting to learn the fate of their missing persons, those who have lost loved ones or personally experienced violence, those who are enclaved in Rizokarpasso and elsewhere and keep alive the presence of the Greek Cypriot community in the occupied territories. But just as we see the mobilisation of the international community for Ukraine based on principles, we expect the same for Cyprus.”

The High Commissioner concluded his speech by emphasising that “48 years is a very long time. Healing the wounds of the invasion, mourning and the endless anticipation and hope for the return of refugees, cannot come without the withdrawal of the occupying troops and a comprehensive settlement of the Cyprus problem. We can and want to live peacefully, in a modern, functional, independent, European country. In a reunited state, with one sovereignty, one citizenship and an international identity. A reunited and free Cyprus is what we owe as a tribute to those whom today we commemorate. May the memory of our heroes, who fell for the freedom of Cyprus be eternal and may God give strength to the families of our missing.”

The President of the National Federation of Cypriots in the UK, Mr Christos Karaolis, also gave an opening address. Mr Karaolis thanked His Eminence Archbishop Nikitas and the High Commissioner Andreas Kakouris, for the willingness with which they accepted the invitation, to participate and speak at the National Commemoration. He also thanked His Eminence, because he issued an encyclical for all the Greek Orthodox churches of the Archdiocese to hold commemoration services on the same day.

He emphasised that “President Anastasiades is systematically working for the resumption of talks based on the framework of the UN Security Council. In the face of this, Turkish provocations continue every day. President Erdogan and the Turkish Cypriot leader Tatar, are changing the status quo in Varosi, violating UN and EU resolutions, and are showing a complete disregard for human rights. They seek the permanent partition of Cyprus and the creation of two states. They deliberately block the initiatives to restart the talks, exploit the migration crisis and at the same time seek to complicate matters further, through protocols that have the ultimate goal, of giving Turkey complete control of our occupied territories.

He went on to praise the close and fruitful cooperation that the Federation enjoys with the High Commissioner, Archbishop Nikitas, the Greek Embassy and the Chair of the All-Party Parliamentary Group for Cyprus (APPG for Cyprus) Sir Roger Gale MP, as well as all the other members of the APPG. With their support, the Federation has redoubled its efforts to counter Turkish disinformation and propaganda.
He added that, “The Federation has re-launched its Hands Off Cyprus e-campaign. We congratulate and thank all the members of the diaspora and the Archdiocese, who have helped us to communicate with 390 MPs (60% of MPs), that have received letters from their constituents, about Cyprus. These campaigns prove that when we work together, we can achieve more.”

In closing, the President of the Federation said that “The memory of our heroic dead, calls for us, and urges us, to continue the struggle for the end of the Turkish occupation, the liberation, peace, security and prosperity of our beloved Cyprus.”

The photos were taken by the photographer, Alexis Gennaris.