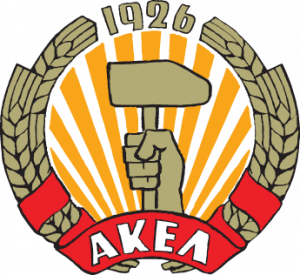 AKEL in Britain was officially established in September 1972 but had its roots in the Cypriot community’s progressive movements and organisations that date back to the 1930s and particularly the late 1950s. Cypriot migrants to the UK experienced hostility, xenophobia and racism as they moved over from Cyprus en masse during Britain’s economic crisis in the 1930s, and during the post-WW2 years. The Communist Party of Britain (CPB) became a home for progressive-minded immigrants and gave them the opportunity to become active in politics in Britain, without the fear of racism.

With the establishment of AKEL in Cyprus in April 1941, the members of the Cypriot groups of the CPB were considered members of AKEL. This process of coexistence held until 1948, when AKEL in Britain was dissolved and its members remained members of CPB. In November 1966, by decision of the Central Committee of the CPB and the consent of the CC of AKEL, the separate Cypriot groups merged with the other groups in CPB. In January 1972, at a meeting of Cypriot officials and members of CPB, it was decided to re-establish a branch of AKEL in Britain. In September 1972, a founding conference was held to approve the establishment of AKEL in Britain based on the constitution of AKEL. Since then, AKEL in Britain has worked tirelessly towards its primary objective of enlightenment on the Cyprus problem and the reunification of Cyprus.

AKEL in Britain has always believed in and worked for a common, united country for both Greek Cypriots and Turkish Cypriots, and that there must be mutual trust and a spirit of cooperation. AKEL in Britain also works for the preservation of the national and cultural identity of the Cypriot community.

The party has members among all Cypriot communities in the UK (Greek Cypriots, Turkish Cypriots, Maronites, Armenians and Latins). They organise political meetings with speakers from the Party in Cyprus, and community-wide meetings on Cyprus for Cypriots of all backgrounds. AKEL sought and simultaneously worked hard and continues to work for the unity of our community achieved through the National Federation of Cypriots in the UK.