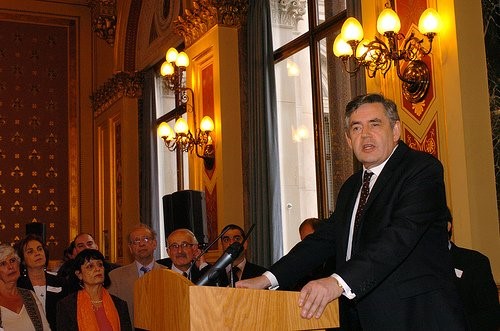 Prime Minister Gordon Brown MP last night reiterated his strong support for a reunited Cyprus at a reception hosted by the Minister for Europe, Caroline Flint MP, at the Foreign and Commonwealth Office in London. The event was organised in co-operation with the National Federation of Cypriots in the UK.

The reception was the first of its kind for the UK Cypriot community underlining the enhanced importance attached to the community by the British Government and its increasing focus on the Cyprus problem at a time when crucial negotiations are taking place on the island between the leaders of the two communities. The Prime Minister spoke of his optimism that the talks will succeed, saying that anything can be achieved when people of goodwill decide on it.

The multi-communal event attracted a very large number of representatives of UK Greek Cypriot, Turkish Cypriot and Cypriot Maronite groups, who had the opportunity to talk to the Prime Minster and the Minister for Europe about the community’s place in the United Kingdom and also about the need for the UK to support actively efforts to restore the unity of Cyprus.

In his address, the Prime Minister expressed his gratitude to the UK Cypriot community for its contribution to Britain and its work in relation to Cyprus. He said:

On the current talks which are aimed at reuniting Cyprus, he added:

“As a government, we believe that we can play a part in helping towards a solution made by Cypriots for Cypriots. I pledge to you that I will do whatever I can to help [Cyprus] President Christofias and [Turkish Cypriot leader] Mr Talat. What you share as aims and objectives, we share too and we will work with you to realise these.”

“Since I became Europe Minister I have made supporting the Cyprus settlement negotiations a very top priority. The Prime Minister’s presence today underlines the support of the UK Government for a settlement, and we will continue to play our part in encouraging and assisting Cypriots from both communities to reach a fair and just solution.

“A solution by Cypriots for Cypriots will benefit the entire region – Europe, North Africa, the Middle East – and we will continue to provide assistance both to Cypriots here and in Cyprus, to support the leaders in the search for a resolution”.

“Prime Minister, we were very encouraged by the Memorandum of Understanding which you signed with President Christofias nearly a year ago. As the largest community of the Cypriot diaspora and, of course, as active citizens of a country as influential as the UK, we are very keen to work with you and the whole of the British Government in order to help realise the vision of a reunited Cyprus – a state with a single sovereignty, international personality and a single citizenship- that is articulated in that memorandum.“

A diverse group of around 100 Cypriots, invited by the Foreign Office, attended the event in Westminster, including members of the Federation’s Secretariat as well as representatives of the UK Turkish Cypriot and Cypriot Maronite diaspora. A number of British parliamentarians were also present at the event.