Minister for Europe: “Cyprus will not be forgotten” 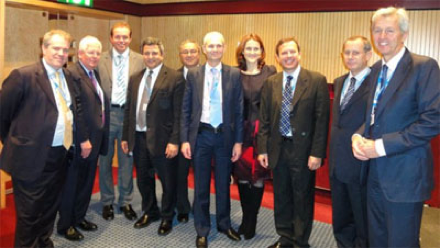 A fringe event organised jointly by Conservatives for Cyprus and Federation members DESY UK and the Greek Cypriot Brotherhood, under the auspices of the Federation, was hosted by Theresa Villiers MP (Minister for Transport) and Charles Tannock MEP and attended by a number of other politicians, delegates and visitors to the Conservative conference. Ms Villiers welcomed guests and spoke of her pride in her party’s record on supporting Cyprus, saying:

“Support for Cyprus is unstinting in the Conservative party. The two communities in Cyprus have the capacity and the will to live harmoniously together in a reunited Cyprus if they’re given the opportunity to make their own decisions about their own country and our Government will give all the support to Cypriots to reach a lasting and just solution.”

She then introduced David Lidington MP who told guests that Cyprus remains high on the Foreign Office’s list of priorities:

“The cause of Cyprus is not going to be forgotten. The Government, William Hague and I personally, are committed to do whatever lies within our power to help sustain and support the Cypriot-led process under the auspices of the United Nations, which we hope will lead to the reunification of the island which ordinary families on both communities wish to see. And when we talk to the governments of Greece and Turkey we also make sure that they are aware of the importance that we attach to the issue of Cyprus and make sure they are aware of our wish for them to do all that they can to bring about a settlement and to do so soon.”

Co-host Charles Tannock MEP spoke of how he works with his counterparts in the European Parliament, adding that “there is a narrow opportunity in the next few months for a breakthrough. It is essential that Mr Eroglu and President Christofias realise that the situation cannot go on forever and that they must seize the opportunity and come to a solution where Cyprus is united together, while respecting each other’s cultures.”

Andreas Papaevripides, Federation Vice-President and Chairman of DESY UK, representing the Conservative Party’s sister party, DESY, thanked Conservatives for their interest and support for Cyprus over many years, and went on to remind the guests that while we mourn the division of the island, we can nevertheless celebrate the recent 50th anniversary of the Republic of Cyprus.

The National Federation of Cypriots in the UK was represented at the event by its President, Mr Peter Droussiotis, who earlier in the evening had met with Foreign Secretary Rt Hon William Hague MP at the Conservative Party’s International reception. He thanked guests and the hosts of the event for their continued support on the Cyprus problem, reassuring them that the Cypriot community in the UK would not give up the “just struggle to reunite the island on the basis of democratic values” and asking for their help to turn the vision of a reunited island into reality. He added:

“We, British Cypriots, are fully supportive of President Christofias’s really strenuous efforts and the principled flexibility ha has shown in the direct negotiations and we call upon the new Turkish Cypriot leader to reciprocate so that a negotiated settlement can be reached as soon as possible, but we have no doubt that Turkey’s role is  absolutely crucial to the outcome of these negotiations. There can be no solution in Cyprus without Turkey’s positive contribution and active engagement.”