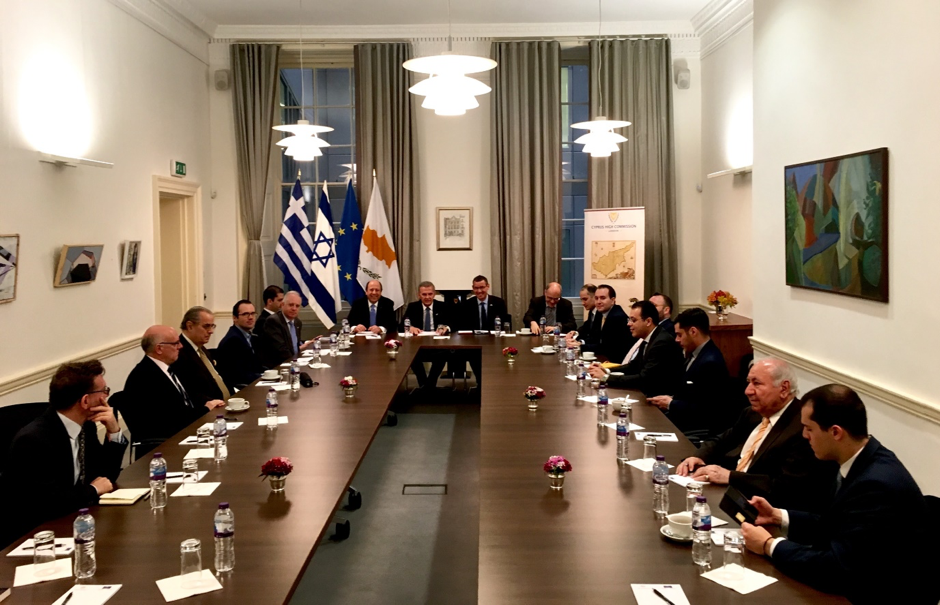 The first Cyprus-Israel-Greece tripartite meeting was held in London on Tuesday 30 May, where Government and Community representatives met to discuss:

Cyprus’ Presidential Commissioner for Diaspora Cypriots, Mr Photis Photiou, was welcomed to the Cyprus High Commission on Tuesday 30 May to discuss the positive and deepening diaspora relations between Cyprus, Greece and Israel. Their Excellencies, the High Commissioner for Cyprus, Mr Euripides Evriviades; the Ambassador of Israel, Mr Mark Regev; and the Ambassador of Greece, Mr Dimitris Caramitsos-Tziras, were present to lead the meeting and share their valuable reflections. They were joined by representatives of the UK Jewish diaspora (from the Board of Deputies of British Jews), the UK Cypriot diaspora (from the National Federation of Cypriots in the UK) and the UK Greek diaspora (from the Hellenic Bankers Association of the UK, the Greek Energy Forum, the Greek Shipping Cooperation Committee, and the Engineer’s Society of Great Britain).

The meeting in London followed on from the 2nd Trilateral Summit Declaration signed in Jerusalem in December 2016 between Cyprus, Israel and Greece and the first trilateral meeting on diaspora issues in Jerusalem in March 2017.

Mr Evriviades opened the meeting in London by welcoming Mr Photiou and the two Ambassadors to the Cyprus High Commission. He then spoke of the need for “community driven, grassroots cooperation that will serve the interests of all parties to promote shared values and interests.” He welcomed this initial meeting and said that he “believed that tangible outcomes were possible thanks to the drive of the diaspora organisations”. Mr Photiou then addressed the meeting and highlighted some specific issues that the diasporas of Cyprus, Israel and Greece could cooperate on such as political advocacy, tourism, youth organisations and culture. Mr Photiou concluded by saying that he was “very pleased to see that there were already good relations between the diaspora communities in the UK and he looked forward to their continued strengthening”. Ambassador Regev said that he considers the tripartite relationship to be “win, win, win for the three countries” and emphasised the importance of all three countries in the history of the Western world. He said that one of the many common values between the countries was “a great pride about the past but also the strength to embrace the future.” Ambassador Caramitsos-Tziras outlined how the positive trilateral relations showed stability in a “troubled neighbourhood” and how he wanted to see the diaspora organisations “embrace the opportunity to work together in the fields of politics, business, science and academia because all three diasporas excel in those areas in the UK.”

All diaspora communities present emphasised the importance of extending the deep cooperation at a political level to a community level and welcomed this meeting as a means to deepen the exiting good relations in the diaspora. President of the Board of Deputies of British Jews, Mr Jonathan Arkush, and President of the National Federation of Cypriots in the UK, Mr Christos Karaolis, recalled the two organisations’ successful collaboration in January 2017 about the Jewish internment camps in Cyprus during the Second World War and expressed their desire to deepen this collaboration. Mr Arkush spoke specifically about his excitement about the great potential that cooperation brings to all three communities, highlighting the sizeable diasporas concentrated in the same regions of North and East London. Mr Karaolis emphasised the significant buy accutane online strength that he believes could come from cooperating on culture, entrepreneurship, political engagement, and inter-faith issues. The representatives from Greek organisations all expressed their desire to collaborate with the Cypriot and Jewish communities in the UK in the fields they represented including business, energy, shipping, science and academia.

Following this meeting in London, the next tripartite meeting will take place at a political level in Thessaloniki in June. After the conclusion of the political meeting, a further meeting is planned to take place in London.