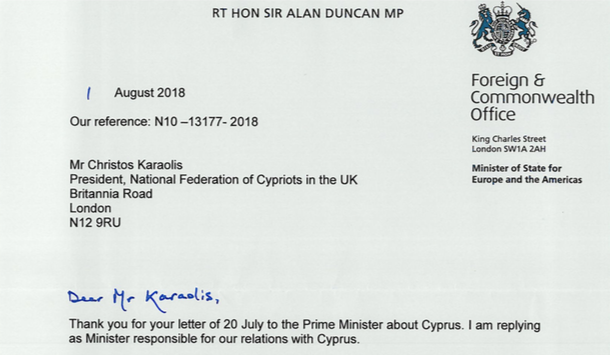 With the upcoming visit of Jane Holle Lute (the United Nations Secretary General’s Special Envoy on Cyprus) to the UK, we asked the Government, Opposition & APPG for Cyprus for their views on the Cyprus issue.

Here is what they said:


Sir Alan Duncan MP, Minister of State for Europe and the Americas, outlined the Government’s position in a letter to the Federation’s President:

“I would like to assure you of the UK’s ongoing support for a just and lasting settlement to reunite Cyprus. We continue to believe that the internationally accepted model of a bizonal, bicommunal federation is the best way to achieve that goal.
On Security and Guarantees, the UK has always made clear that we are open to whatever arrangements the two sides and other Guarantor Powers can agree to meet the security needs of both Cypriot communities. A final deal will also only be possible if it passes referenda in each community.
At last year’s Conference on Cyprus, all parties engaged with serious intent to reach a deal. In the end it was not possible to bridge the gaps. Since then, the British Government has urged all parties to avoid words or actions that risk escalating tensions in the region or that could have a negative impact on the prospects for resuming the talks.
The UK has long recognised the sovereign right of the Republic of Cyprus to exploit the natural resources in its Exclusive Economic Zone and we want to see exploration go ahead. We have discussed the developments earlier this year with Turkey. We believe that Cyprus’ hydrocarbons should be developed for the benefit of all Cypriots, and urge all parties to look for ways by which the development of hydrocarbons can support a search for a settlement.
We continue to work with all parties in the search for a fair and sustainable settlement. It is now for the parties to decide the way forward. The Government will continue to encourage them to work towards a resumption of talks and stands ready to discuss how we can support progress. Reaching agreement on the remaining issues will require tough choices and compromises but with political will, we judge a settlement is still achievable.”
Her Majesty’s Official Opposition – Labour Party
Fabian Hamilton MP, Shadow Minister for Peace and Disarmament, and Khalid Mahmood MP, Shadow Minister for Europe, outlined the Opposition’s policy in a statement issued to the Federation’s President:
“Forty four years after the invasion, the Labour Party continues to seek an end to the occupation, and the reunification of Cyprus. We are committed to supporting President Anastasiades & Mr Akinci, the international community and the people of Cyprus to achieve this.
A solution must be in line with UN Security Council resolutions, High level agreements, the EU acquis, as well as the Guterres framework, as articulated in Crans Montana. It must also respect the Rule of Law and the fundamental rights of all Cypriots.
We support the re-unification of Cyprus as a bizonal, bi-communal federation that is a normal, viable state and that represents all the communities of Cyprus. Cyprus is a member of the EU & Commonwealth and does not require outdated guarantees or foreign troops. We must look forward and the EU represents the best security for all the people of Cyprus. A just solution must also address the crucial issue of property. Cypriots from both communities have lost property and a solution must allow these refugees to reclaim their property, if they choose to.
We must also rapidly address the humanitarian issue of the missing persons. We encourage all Governments to release information from their archives and fully cooperate, to bring closure to the families who still do not know the fate of their loved ones.
For too long now, the people of Cyprus have been divided. We must, once again, bring together the people, cultures and heritage of the island. Whilst it is disappointing that the Crans Montana negotiations collapsed, we are encouraged by the recent appointment of a new UN Special Envoy Jane Holl Lute. We urge all parties to resume negotiations, as soon as possible, from the point at which they ended and for Mr Akinci & President Anastasiades to be given the freedom to negotiate without interference, in a spirit of compromise, mutual respect and trust.”
Liberal Democrats
Jo Swinson MP, Deputy Leader of the Liberal Democrats and party Spokesperson for Foreign and Commonwealth Affairs, outlined the Liberal Democrat policy in a statement to the Federation:
“The Liberal Democrats want to see the reunification of Cyprus after 44 years of division. Cyprus can succeed as an independent and reunited state on the basis of reconciliation and respect for the fundamental rights of both the Turkish and Greek Cypriot communities. Any future settlement of property rights must ensure that the legitimate claims of the Greek Cypriot population evicted in 1974 are recognised, without causing a second injustice.

We support the immediate withdrawal of all foreign troops and military equipment, and the ending of restrictions governing the mobility, property and settlement of both communities within the island.We are calling for the leaders of the two communities to reach agreement on the reunification of Cyprus. We believe in a bi-zonal bi-communal federation with political equity, and a federal government with a single international sovereignty and citizenship. We support a comprehensive agreement that will deliver equality for both Turkish and Greek Cypriots on the island. It is also vitally important that the details of all missing persons is released.

Cyprus should be higher up the international agenda. The Liberal Democrats are encouraging both sides to keep up the momentum following the collapse of negotiations in 2017, we will do everything we can to encourage a resolution under the assessment of the UN, of this 44 year old problem.”

All-Party Parliamentary Group for Cyprus
On behalf of the APPG for Cyprus, the Chairman, Sir Roger Gale MP, issued the following statement to the Federation’s President:
“It is time to bring to an end the illegal 44 year occupation of the northern part of Cyprus and reunite the island, so that all Cypriots can live and prosper together, and so that the human rights of all Cypriots are respected.
I want to see a just and lasting solution that will ensure Cyprus is respected as an independent and sovereign country without third country guarantors or foreign troops. As an honorary citizen of Morphou, I also know how important it is for refugees from the invasion to be able to return freely to their homes and a solution must ensure that individuals are able to do so.
Although it is disappointing that the Crans Montana negotiations collapsed, significant progress was made during those talks. The discussions must re-commence from the point at which they ended with Mr Akinci & President Anastasiades given the freedom to negotiate a deal between themselves. A reunited Cyprus would be a beacon of hope and prosperity in a troubled region of world and with political courage I believe that it can be achieved.”
The Green Party of England and Wales*

The Green Party welcomes the appointment of the UN Special Envoy on Cyprus, Ms Jane Holl Lute and is supportive of all actors in the challenge of achieving successful negotiations towards a united Cyprus and a peaceful future for all Cypriots.

We support the re-unification of the island as a bi-communal, unified state which represents all communities in Cyprus. We urge the UK to support this process and to recognise the importance of this particular opportunity to restart negotiations, while engaging with leaders of both communities- those of the Republic of Cyprus and the Turkish Cypriot community. The process of exiting the European Union must not detract from other international priorities such as the opportunity to work for a peaceful and united Cyprus.

Standing for the principles of non-violence and anti-colonialism, the Green Party supports a demilitarized Cyprus without foreign troops on its soil. As a member of the European Union, a unified Cyprus would not need a system of guarantor powers, which is an outdated concept, and the British Government should publicly call for the Treaty of Guarantee to be abolished. In recognition that only the Republic of Cyprus is currently an EU member state, Green Party recognises that the United Nations is the best arena in which Cyprus’ security can be ensured. The role of guarantor powers, currently, Turkey, Greece and the United Kingdom should cease.

We support the rights of refugees to return, as required by international law, and insist on the importance of finding meaningful solutions for those who were internally displaced, to return or be compensated as part of the peace negotiations. We also urge the international community, particularly countries which benefit from the skills and labour of the Cypriot diaspora such as the UK, US, Canada, Australia and South Africa to participate in the reflection about they can also support the process and offer compensation for those who lost their land on both sides. Compensation, through financial support and investing in peace, rather than military solutions, we believe would be a just approach from the international community, which will help the people of Cyprus in the upcoming negotiations and in sustaining the future peace.

We furthermore recall the proposal of the European Greens to designate and declare the city of Famagusta as a model city under EU supervision, as a joint and common pursuit of the Greek and Turkish side until a comprehensive solution for the Cyprus problem has been enacted. This proposal can only be implemented with the consent of both communities inhabiting the Island of Cyprus.”

*Released on 15 October 2018 a few weeks after the meeting of the United Nations Secretary General’s Special Envoy visited the UK.