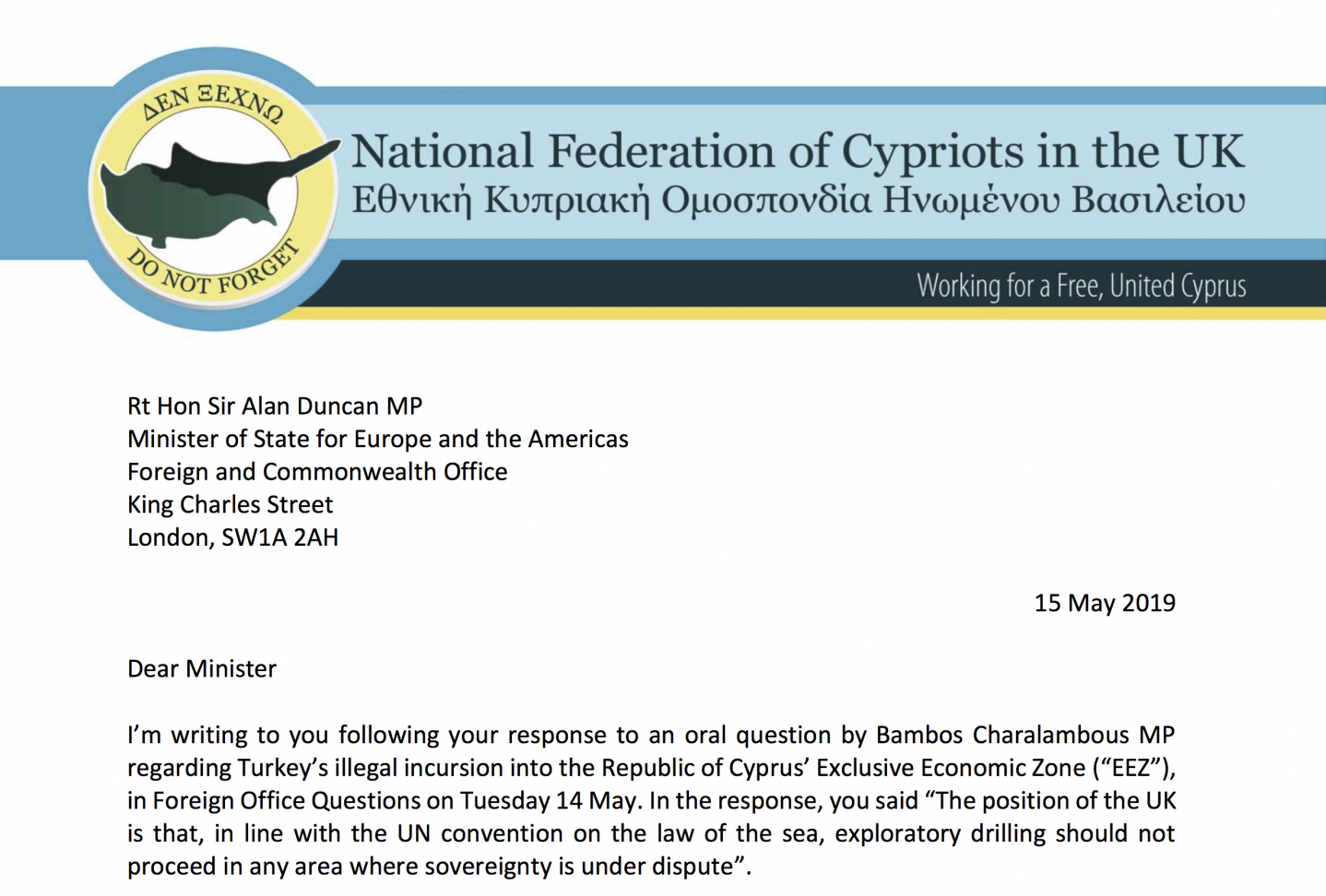 The National Federation of Cypriots in the UK have written an open letter to the Minister for Europe, Sir Alan Duncan MP, calling on him to clarify the statement that he made yesterday (14 May) in response to an oral question from Bambos Charalambous MP at Foreign Office questions. The President of Cyprus and the UK Cypriot community have described Sir Alan Duncan MP’s response as “unacceptable”.

Less than two weeks ago, Turkey unilaterally moved warships and drillships into the Republic of Cyprus’ sovereign Exclusive Economic Zone (EEZ) with the intention of beginning to drill for hydrocarbons. The threat of such action from Turkey has been near constant over the last few years but suddenly Turkey has escalated its actions as warship ‘Barbaros’ and drill ship ‘Fatih’ (which translates to ‘conqueror’ in English) have arrived with the intent to start drilling for natural resources.

In recent years, significant hydrocarbon reserves have been discovered in the Republic of Cyprus’ EEZ. For example, in February 2019, American energy giant ExxonMobil and the Cypriot Government announced that they had discovered 5-8 trillion cubic feet of natural gas resources in one part of Cyprus’ EEZ. The Republic of Cyprus has exercised its internationally recognised, sovereign rights in its EEZ and has licensed drilling permits to international energy companies who will begin drilling over the next few years. The Government of Cyprus has been clear that all Cypriots will benefit from the exploitation of the island’s natural riches and has established a wealth fund.

Yesterday (14 May) during FCO oral questions, the British Minister for Europe (Sir Alan Duncan MP), replied to a question from Bambos Charalambous MP by saying that, “drilling should not proceed in any area where sovereignty is under dispute”.

This statement has triggered a response from the Cypriot Government and the President of Cyprus has described Sir Alan Duncan MP as “unacceptable” and is writing a letter to Prime Minister Theresa May today. The British High Commissioner to Cyprus, Mr Stephen Lillie, has been summoned to the Foreign Ministry of Cyprus to explain the statement further.

Following this statement, Fabian Hamilton MP (Shadow Minister for Peace and Disarmament), on behalf of the Labour Party, has written to Sir Alan Duncan MP. Mr Hamilton described the statement as “shocking” and called for urgent clarification.

For context, and contrast, here are some statements on Turkey’s actions from others in the UK and from the US House Foreign Affairs Committee: