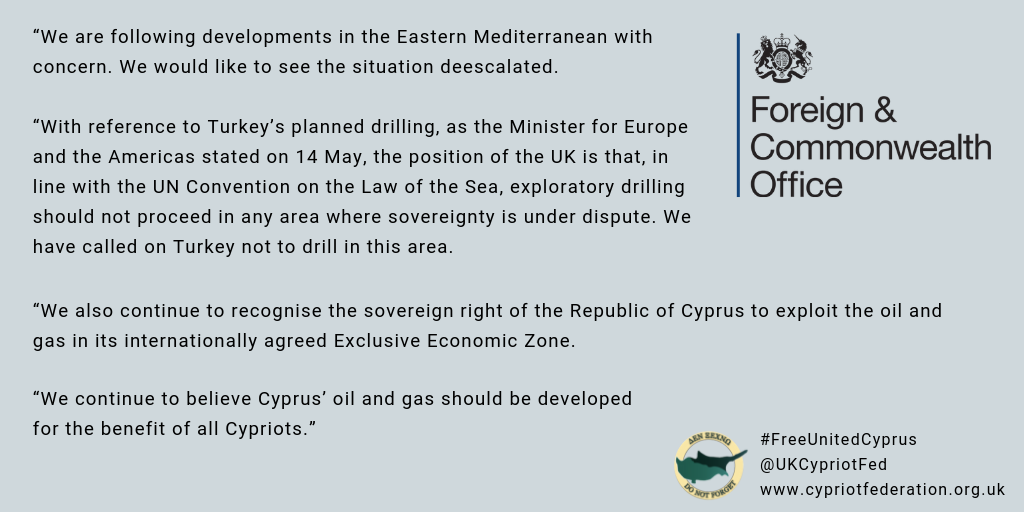 The Foreign & Commonwealth Office has repeated the statement by the Minister for Europe, Sir Alan Duncan, regarding “sovereignty under dispute” in the Exclusive Economic Zone (EEZ) of Cyprus, now adding that the UK has called on Turkey not to proceed with any drilling in the area.

In an official statement issued to the Cyprus News Agency in London on Thursday afternoon, a Foreign Office spokesperson said:

“We are following developments in the Eastern Mediterranean with concern. We would like to see the situation deescalated.

“With reference to Turkey’s planned drilling, as the Minister for Europe and the Americas stated on 14 May, the position of the UK is that, in line with the UN Convention on the Law of the Sea, exploratory drilling should not proceed in any area where sovereignty is under dispute. We have called on Turkey not to drill in this area.

“We also continue to recognise the sovereign right of the Republic of Cyprus to exploit the oil and gas in its internationally agreed Exclusive Economic Zone.

“We continue to believe Cyprus’ oil and gas should be developed for the benefit of all Cypriots.”