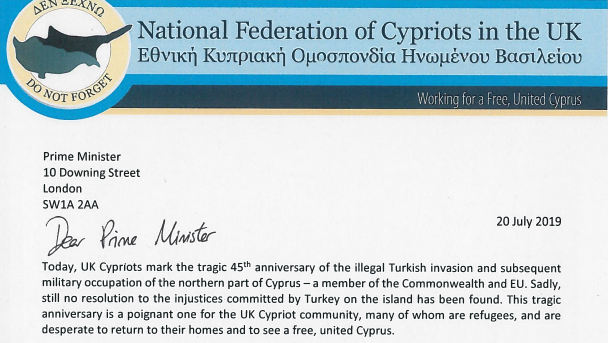 The Federation has sent a letter to the Prime Minister on the tragic 45th anniversary of the Turkish invasion of Cyprus raising concerns about Turkey’s “increasingly authoritarian and aggressive policies towards Cyprus.” This is in large part not only a reference to the continuing occupation of 37% of Cyprus, but also the more recent movement of Turkish war and drill ships into the Cypriot Exclusive Economic Zone.

The letter notes that “such activities are a flagrant breach of international and European Law and the sovereign rights of the Republic of Cyprus” and also the fact that Turkey has “chosen to escalate the situation further”, dismissing international condemnation and sanctions.

It also reminds the Prime Minister that the tragic humanitarian issue for the 1,100 mission persons is still unresolved and that, “the UK can make a real contribution on this issue”.

The letter concludes by appealing to the Prime Minister to make a positive and lasting difference for Cyprus:

The United Kingdom remains a crucial player in relation to Cyprus. Not only does it have a historic treaty obligation under the Treaty of Guarantee, which it signed in 1959, it also maintains military bases on the island and it is Cyprus’ partner in the Commonwealth and in the United Nations, as a permanent member of the UN Security Council. It is also a strategic ally of Turkey. Ankara ought to realise that the only way to deal with the problems she herself creates, is through a constructive and decisive dialogue that will lead us to a solution based on the relevant UN Resolutions, High Level Agreements and the principles upon which the European Union is founded. A solution that will, amongst other things, address the challenges we currently face because of the unacceptable military occupation by Turkey. Now is the time for our Government to do more and use the leverage it has in order to exert real pressure upon Turkey to persuade that country, which holds the key to a solution in Cyprus, to engage positively and constructively towards a just and sustainable solution.”