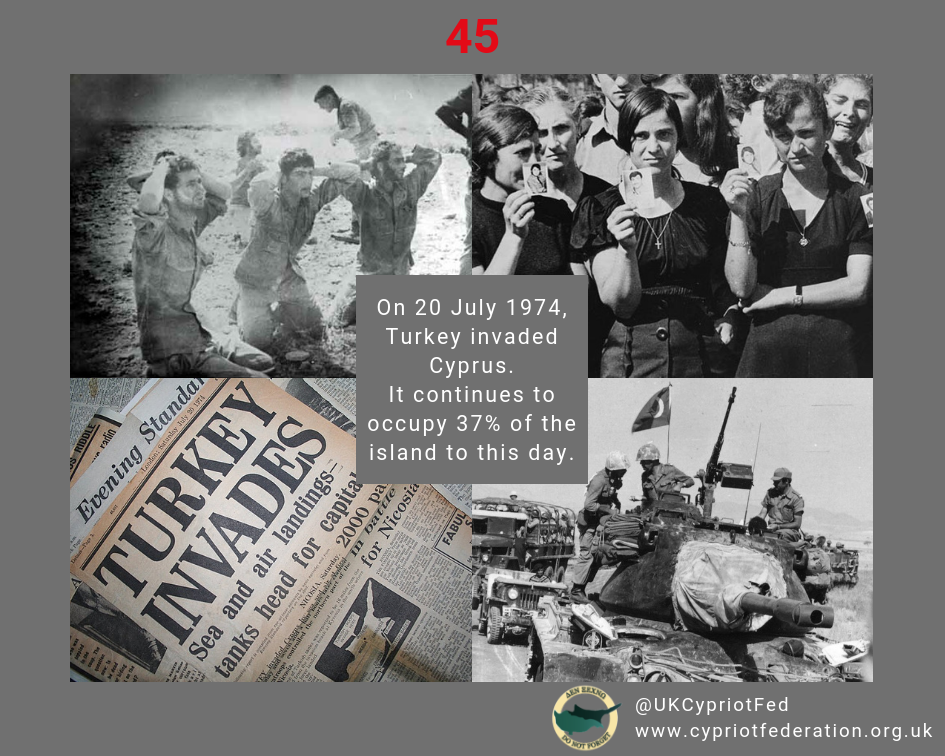 Today marks the tragic 45thanniversary of Turkey’s invading forces landing in Cyprus in 1974 and beginning their invasion and subsequent occupation of 37% of the island and 57% of its coastline. Thousands of Cypriots were killed or injured during the invasion, over 200,000 were made refugees and over 1,000 people are still missing. Turkey executed its long-planned invasion following the illegal coup d’état by the Greek military junta, on the 15th July 1974. For the 45 years since, Turkey has violated United Nations Security Council resolutions; disregarded the Republic of Cyprus’ sovereignty and territorial integrity; and its illegal and aggressive actions have hampered prospects of reunification.

Federation President Christos Karaolis, reflecting on the fate of Cyprus in 1974 and the ongoing occupation, commented:

“It is now 45 years since our beloved Cyprus was illegally invaded and occupied by Turkey. On this tragic anniversary we remain determined and resolute in campaigning for our goal of ending Turkey’s occupation so that Cyprus can finally be free and united. As the National Federation of Cypriots in the UK, we continue to represent and lead UK Cypriots in this campaign for a just and viable solution to the Cyprus issue. Such a solution won’t be reached until the outdated system of guarantors is abolished, occupying Turkish troops are removed from the island and Turkey’s violations of Cyprus’ Exclusive Economic Zone and continental shelf stop. Cyprus must be a state that enshrines and protects human rights for all Cypriots, shares prosperity and progress amongst all Cypriots and is a place of peace and coexistence for all Cypriots.”

A number of MPs have recorded messages for our  community, on the anniversary of Turkey’s illegal invasion at our recent event in Parliament, Cyprus: Prospects for a Solution. Watch the video below: