National Federation of Cypriots in the UK hosts Farewell Dinner in honour of High Commissioner for Cyprus Euripides L. Evriviades 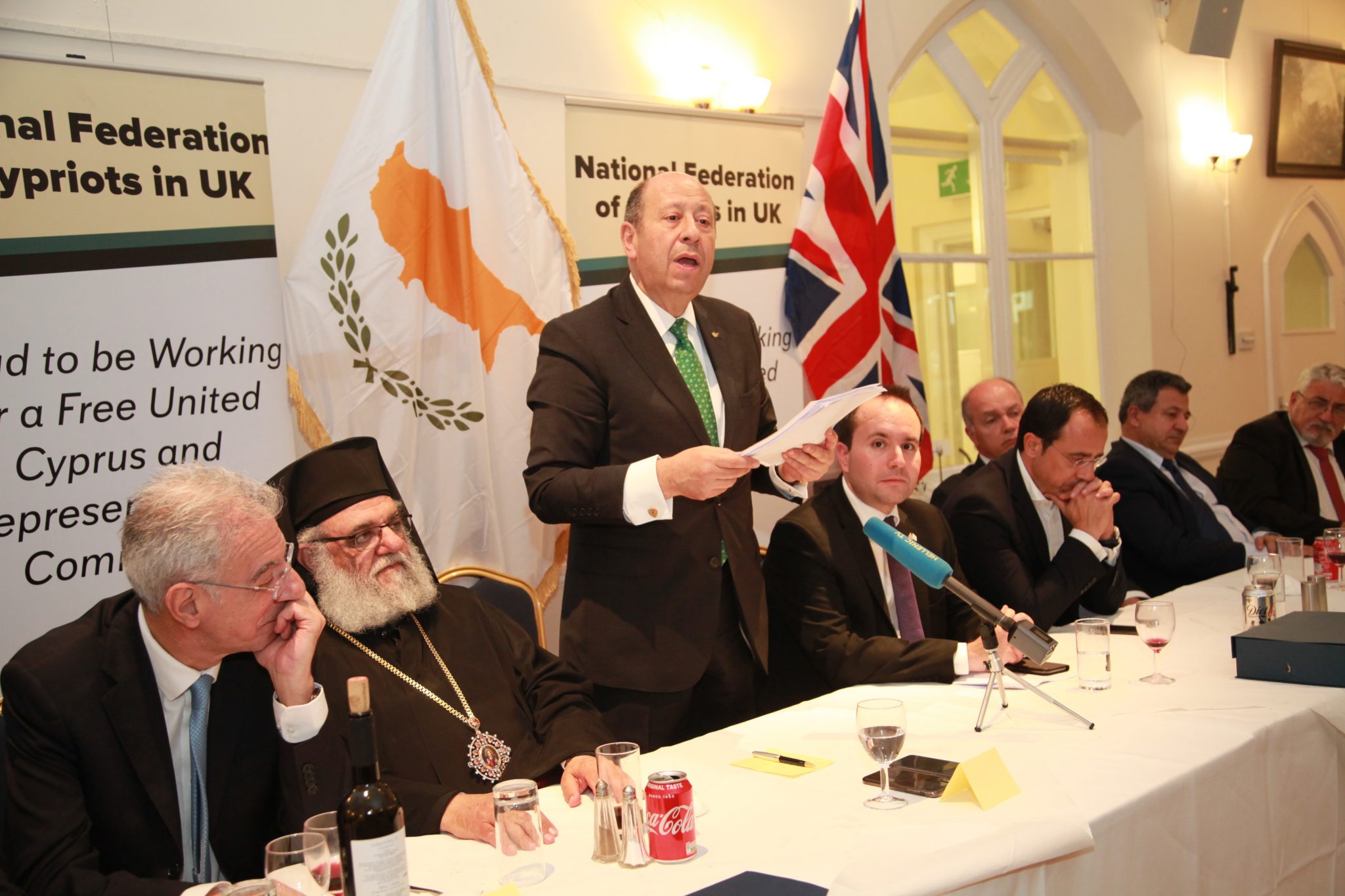 On Monday 15 July, the President and Secretariat of the National Federation of Cypriots in the UK hosted a farewell dinner in honour of the High Commissioner for Cyprus to the UK, Mr Euripides Evriviades, who is retiring after six years as High Commissioner and 43 years in the diplomatic service of Cyprus. The dinner was held under the auspices of the Minister of Foreign Affairs of the Republic of Cyprus, Mr Nikos Christodoulides and Government Spokesperson Prodromos Prodromou.

Before the Farewell Dinner, Christos Karaolis, President of Federation, called for a one-minute silence in memory of all those who sacrificed their lives fighting for the defence of democracy and against the Turkish invaders as well as in memory of the former President Demetris Christofias and former Mayor of Famagusta Alexis Galanos. 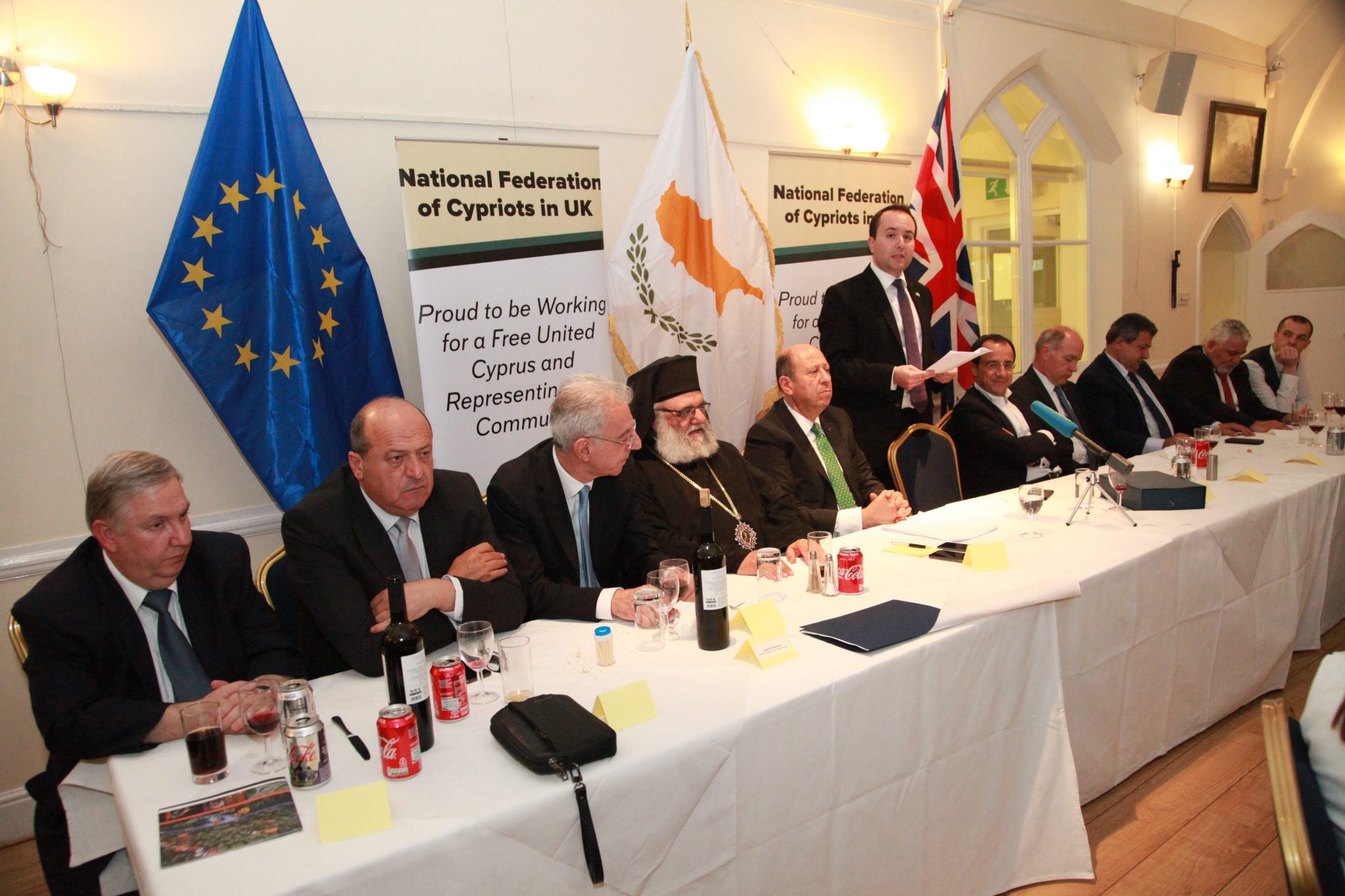 Then, after welcoming and thanking the Foreign Minister and the Government Spokesman for their honorary presence at the Dinner, he reflected on the tragic anniversaries of the Turkish invasion and the coup which brought destruction and destitution to our island.
President of the Federation Christos Karaolis went on to begin honouring the High Commissioner, stating that he won the love and appreciation of the entire community through his arduous work and the way that he embraced our homeland, Cyprus. He said that “from the first day of his engagement in London, Mr Evriviades understood the Federation’s common concerns and began a close co-operation with us towards advancing the UK Cypriot community and advocacy for Cyprus.”

Mr Karaolis also thanked the High Commissioner for his support over the years, expressing certainty that his work, insight and experience would strengthen his work in advocating for Cyprus. The High Commissioner’s team, as well as his wife Nasia, were thanked, who has been a worthy representation of the Cypriot woman in Britain and who with her strength, patience, hospitality and work, greatly strengthened the work of the High Commissioner. 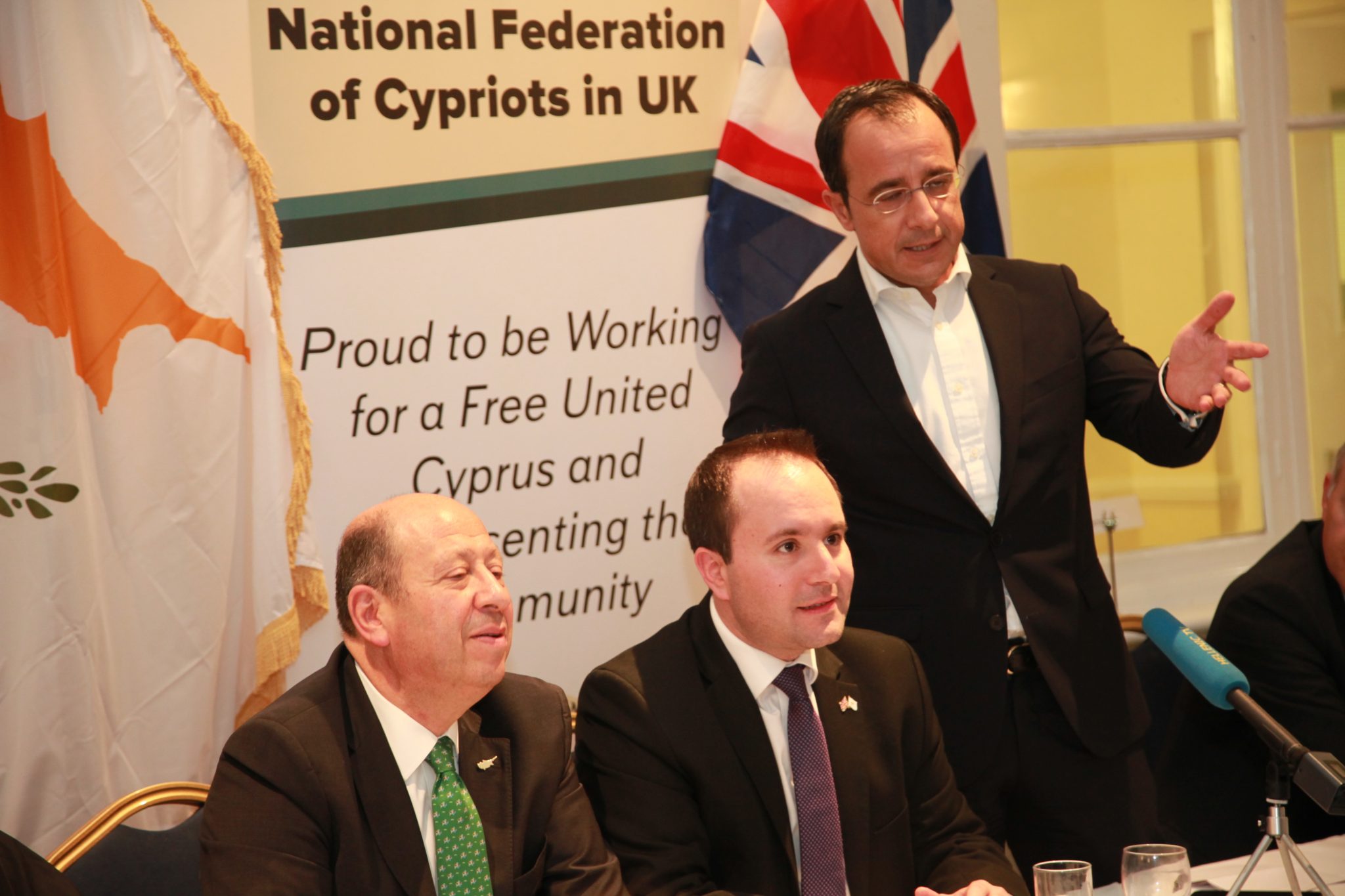 The Minister of Foreign Affairs, Mr. Nikos Christodoulides, then began, detailing the diplomatic posts that Mr Evriviades has served in since his diplomatic career started in 1976, including roles in Bonn, Moscow, Tel Aviv, Tripoli, Strasbourg, Washington, London, and said he is the second diplomat who served in a country for more than five years and the reason was that the community asked for it.

Mr Christodoulides also recalled his first meeting with the outgoing High Commissioner, as a student in the US in 1993, when Mr Evriviades had advised him that to effectively promote the interests of his country, he must be aware of the issues and the interests of his audience. He pointed out this as a valuable piece of advice that he uses to this date in his role as Foreign Minister, adding that he later taught Mr Evriviades the importance of Twitter as a valuable digital tool of diplomacy, joking about the skill of its use by the High Commissioner.

The Minister stated that he believes that the High Commissioner’s wealth of knowledge, work, experience and abilities will continue to be used to help the Republic of Cyprus.
The Greek Ambassador, Mr Dimitris Caramitsos Tziras, followed by expressing his personal appreciation and love for Mr Evriviades, commenting that he rarely meets a professional of such skill. He pointed to the Cypriot diplomat’s ability to broadcast his message in a different way depending on the audience.

High Commissioner Euripides Evriviades began his speech reciting Cavafy’s Ithaca, comparing his journey to that of Ulysses and Ithaca to Cyprus, noting that it has “offered me much more than I could ever offer her”.
He spoke regarding his various diplomatic roles and said that representing the Republic of Cyprus “was my oxygen, my passion, my DNA, my love and my joy, but at the same time my great sorrow that so many years later, our homeland remains divided. ”

He praised the virtues of the Cypriot people, especially their heroism and stressed the need for all Cypriots to reunite. He paid tribute to the invaluable contributions the Cypriot diaspora has made to Cyprus, “the warmest ally and fiercest supporter in the national struggles, the most genuine guardian of our values”, while at the same time thanking its members for the way they embraced him. “It is a great honour for me that I have served Cyprus with you by my side,” he added. He highlighted the important role of the Church, especially outgoing Archbishop Gregorios. 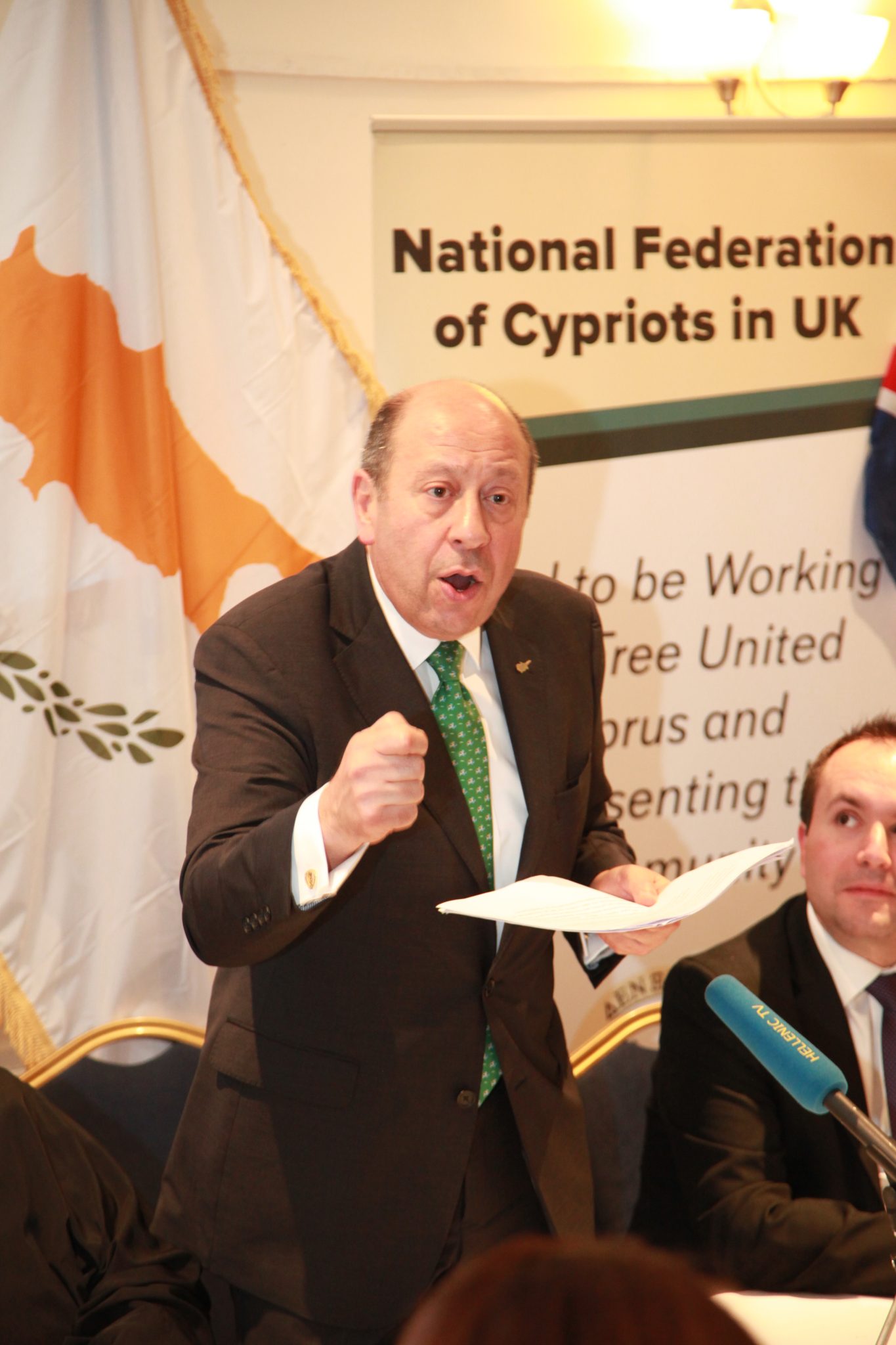 After expressing his wishes to the new Archbishop, Nikita. he asked the community to embrace and support the new High Commissioner, who will take office in early September, as they did to him when he first arrived six years ago.

He also thanked the Greek ambassador, the leadership of the Federation, the staff of the High Commission, his parents, his brothers and his wife Nasia, who was described by the other speakers as “the real power behind the throne.”

Mr Evriviades then spoke about the relationship of the Republic of Cyprus with the UK and stressed that coordinated action by British Cypriots has a real effect on Cyprus. He mentioned that, through the Federation, about 60% of British Members of Parliament have received emails from citizens of Cypriot origin to call on Turkey to take its #HandsOffCyprus.

Speaking of multidimensional and multilevel diplomacy in organizations such as the Commonwealth, the International Maritime Organization and the EU, Mr Evriviades also emphasised that “we should always give a clear signal that we are part of the solution and not part of the problem.”

He continued, adding that “by delivering the baton to the next generation, and having reflected on my personal course, I am proud to have followed this very policy: prudence, respect for the values and ideals of our people, with love and passion for Cyprus and at the same time away from idiosyncrasies and intolerant rhetoric.”

In conclusion, he stressed that “my diplomatic course, my mission as I call it, can complete its cycle, but I am certainly ready to continue with all my might for the sake of our country and our people. Our children are not children of an inferior god. They deserve better. An independent Cyprus, a Cyprus for its people and no one else. We do not ask for and we want nothing more but nothing less than what all other peaceful people have – democracy, human rights and the rule of law. And that’s why I’m committed until the last moment.” 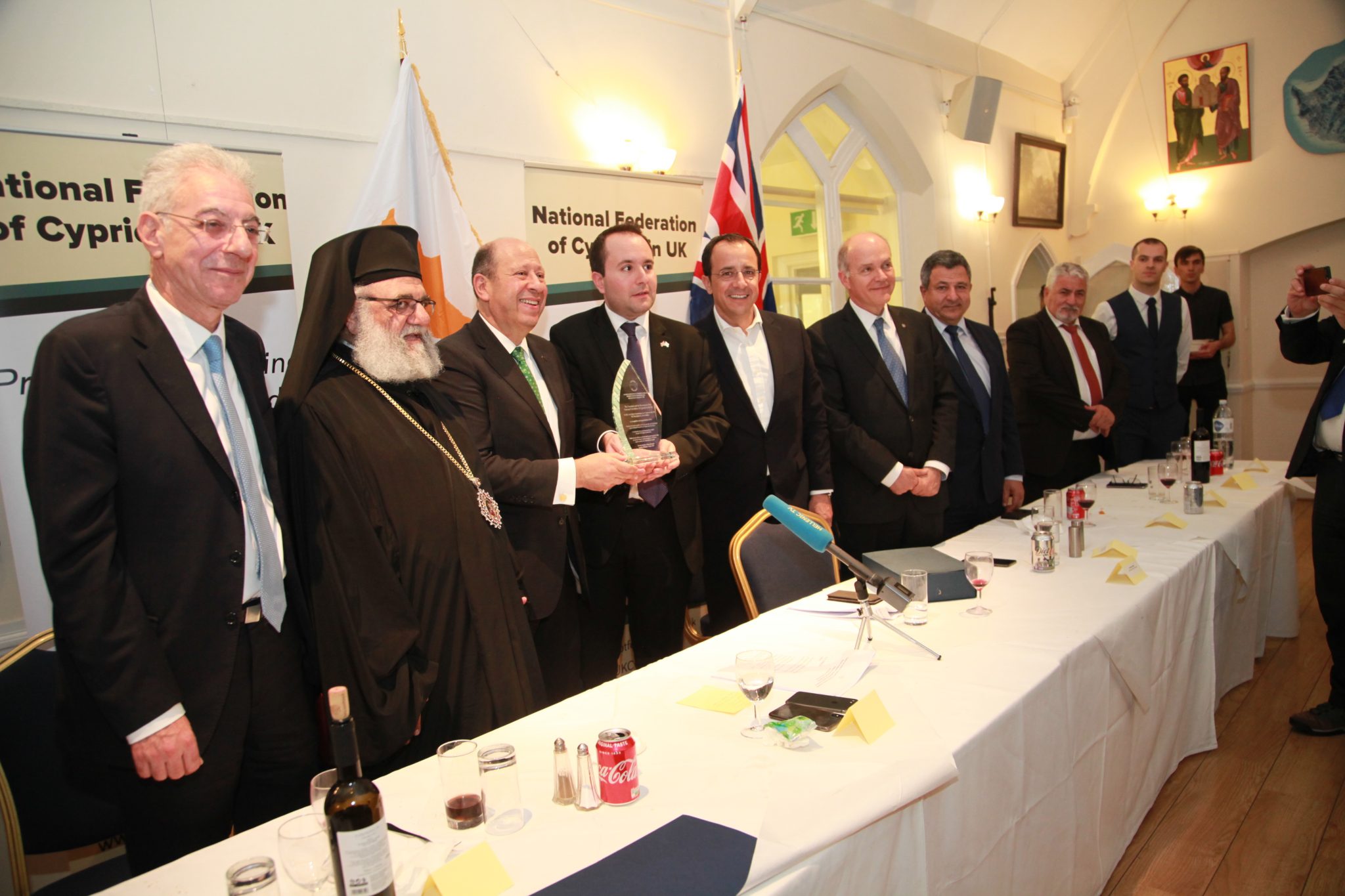 The President of the Federation expressed to Mr Evriviades his confidence that he will proudly continue to raise the flag of Cyprus as long as he lives and gave him a commemorative plaque as a sign of love and appreciation for his regular and fruitful cooperation with the Federation. A similar plaque was given to him by the President of NEPOMAK.

Also present at the Brotherhood were the the Government Spokesman of Cyprus Prodromos Prodromou, Irene Georgalla, the Bishop of Tropeou Athanasios, the President of POMAK Andreas Papaevripides, the Chair of Greek Orthodox Communities in the UK Marios Minaidis, NEPOMAK President Christos Tuton, NEPOMAK UK President Constantine Alexandrou, Father Damianos, European Economic and Social Committee Member Marina Yannakoudakis, the Executive Committee and the Secretariat of the National Federation of Cypriots.