The 20th Conference of the World Federation of Overseas Cypriots (POMAK) – International Coordinating Committee “Justice for Cyprus” (PSEKA) and the Executive Council meeting of the World Organisation for Young Overseas Cypriots (NEPOMAK) was held in Nicosia, on 27-30 August 2019. Delegates from the UK were represented by member organisations of the National Federation of Cypriots in the UK.
As part of the Conference, delegates held elections for the leadership of POMAK and PSEKA. Andreas Papaevripides was re-elected President of POMAK and Philip Christoper was re-elected President of PSEKA. Delegates also expressed their ongoing commitment to advocate and further the cause of a reunited Cyprus, in line with UN resolutions and High Level Agreements, to end the illegal Turkish invasion and continued occupation.
If you would like to get involved in our work and attend next year, email us at: enquiries@cypriotfederation.org.uk or visit our website www.cypriotfederation.org.uk
Opening Ceremony
At the Opening Ceremony of the Conference, President Anastasiades said that he will not agree to a Cyprus settlement that does not ensure the security & safety of all Cypriots.
Addressing the Conference, the President praised the work of the diaspora and assured delegates that the effort of “a politician who finds himself on the exit course is not how to see his homeland run even more risks, but to see how to provide for future generations” and how to leave behind a safe country, ensuring peaceful coexistence. 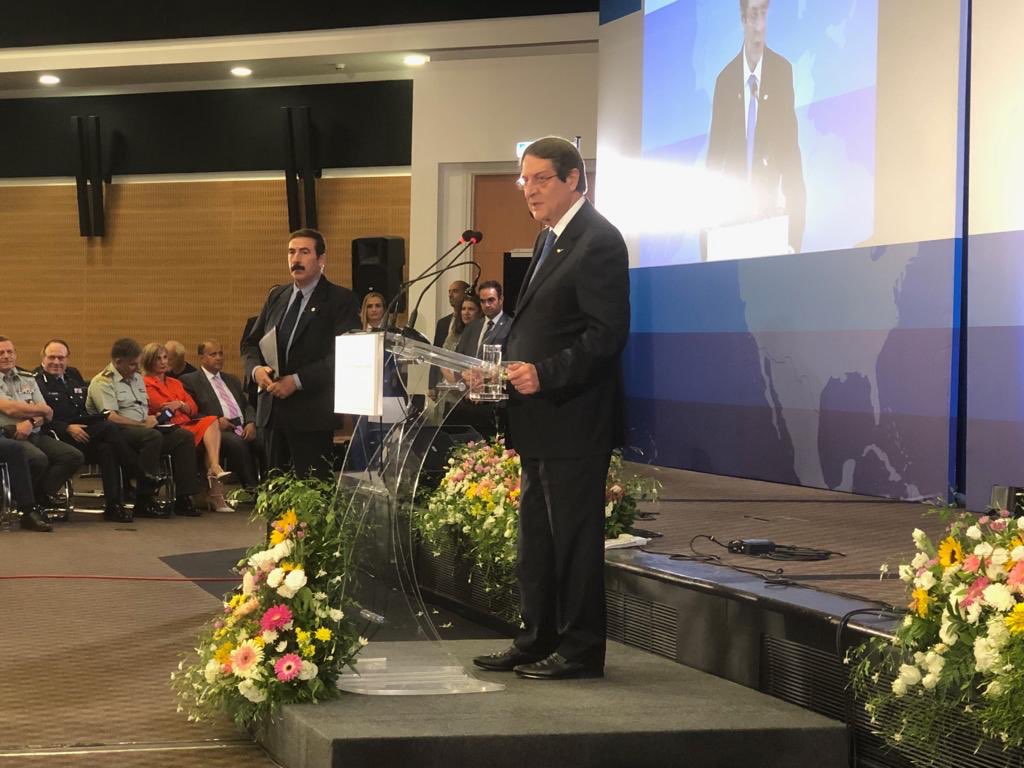 Speaking about the way ahead, the President noted that it has become possible to hold a meeting with the Turkish Cypriot leader, as a result of the intense efforts of the Greek Cypriot side, to agree the path forward. He said that as a result of the August 9 meeting, the two sides appeared willing to ask the UN Secretary-General and international players to act towards the resumption of settlement talks. “I have therefore no reason to refuse to enter into dialogue, or to deny the efforts that need to be made in order to counter the faits accomplis which are being recorded every year” he said.
The President of Cyprus called for unity and said that we need to finally realize that it is not the Greek Cypriots who don’t want a solution, but a greater power with the “vision of a new Ottoman empire” that acts in a way that is not acceptable for Cyprus, or other countries. The President expressed his hope that logic will prevail among those who provoke through illegal activities, not just Cyprus, but also other international players and violate international and European law. He also hoped that in this endeavour, Cyprus will also receive assistance from all those who are really interested in peace, including the EU and the UN.
The Opening ceremony was also addressed by the Presidential Commissioner for Humanitarian Affairs and Overseas Cypriots Mr Photis Photiou, the President of the House of Representatives Mr Demetris Syllouris, the Deputy Foreign Minister of Greece Antonis H. Diamataris, a representative of the Archbishop of Cyprus, as well as the Presidents of POMAK (Andreas Papaevripides), PSEKA (Philip Christopher) and NEPOMAK (Christos Tuton). Also in attendance were the Diaspora Ministers of Israel, Armenia, Serbia and Romania.

In his remarks the Presidential Commissioner, Photis Photiou, said that upgrading and enhancing trilateral cooperation schemes on Diaspora matters with other countries occupies a prominent position among the activities of the National Strategy for the Diaspora. He added that after the bilateral and trilateral cooperation schemes with Israel, Armenia, Egypt, Serbia and Romania, preparations are underway to sign more memoranda of understanding with other countries, such as Ireland, Portugal, Lebanon and Italy.

From their part, the Presidents of POMAK, PSEKA and NEPOMAK pledged to continue their work for the reunification of Cyprus and the termination of Turkish occupation. 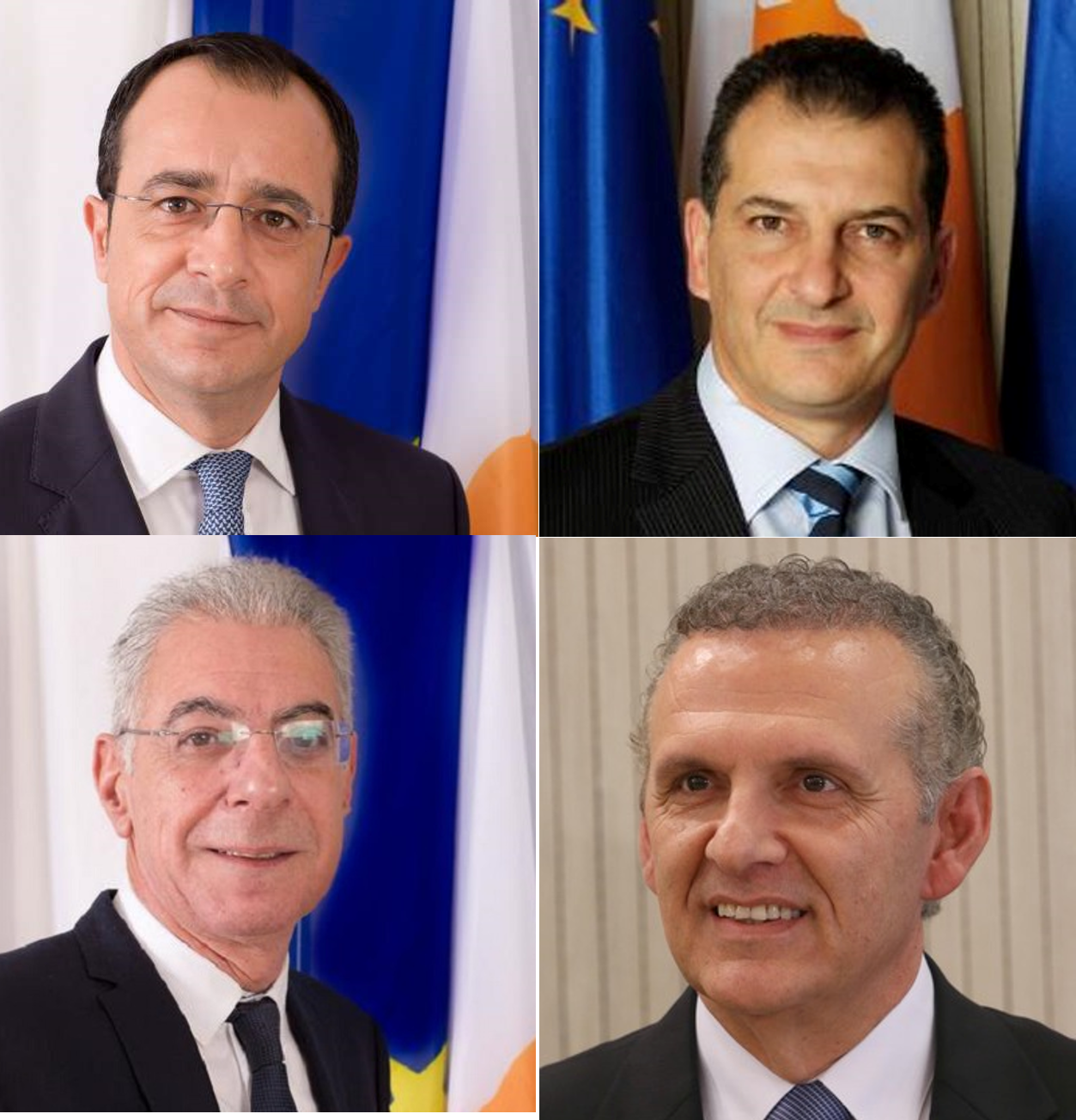 During the conference, delegates met with Cypriot Government Ministers as well as the leadership of the Cypriot parliamentary political parties.
In his briefing Foreign Minister Christodoulides gave an extensive overview of Cyprus’ foreign policy priorities and strategic pillars. He also gave delegates a briefing on the latest developments regarding the Cyprus issue and shared the EU’s perspectives on Brexit.
The Foreign Minister went on to outline the strong bilateral and multi-lateral relationships that the Government of Cyprus is continuing to deepen (as evidenced by the opening of new diplomatic missions in Cyprus e.g. Saudi Arabia, and Cyprus’s planned opening of a diplomatic missing in Japan), and the increased focus that other countries are placing on Cyprus as a source of expertise and knowledge in the region
Commissioner Photiou commended the diaspora, for their vigorous commitment to the Cyprus issue and specifically the issue of the missing, enclaved persons and cultural desecration in the occupied northern part of the island. Mr Photiou hosted a briefing on the important issue of missing persons with the representative of the Committee for Missing Persons Mr Leonidas Pandelides. It was stressed that it’s high time that all information kept by Turkey is released, to enable their families to finally find out what happened to their relatives. The Presidential Commissioner also launched a Guide for Diaspora and Repatriated Cypriots with useful information and contact details. Click here for an electornic copy of the guide.
Energy Minister Lakkotrypis briefed the delegates on the developments in Cyprus’ energy exploration and the recent illegal incursion by Turkish drilling and warships in the Exclusive Economic Zone (EEZ) and Continental Shelf of Cyprus. Responding to a question about Turkey’s so-called claims to be protecting the energy rights of Turkish Cypriots, the Minister highlighted that under Turkey’s (illegal) proposals for Cyprus’ EEZ the Onesiphoros & Block 10 fields would be in Egypt’s EEZ, the Aphrodite field would be in Israel’s EEZ and the Cuttlefish fields would be in Lebanon’s EEZ. This would have the effect of relinquishing 31% of Cyprus’ natural resources and is contrary to the delineation agreements already signed by the Republic of Cyprus.
Government Spokesman, Prodromos Prodromou, thanked Diaspora Federations for ensuring the Cyprus issue remains on the political agenda in their home countries. He also discussed efforts to upgrade english language news, information and briefing materials that are available to the diaspora.
Conference delegates also held a panel discussion and Q&A with the leadership of the Parliamentarty political parties in Cyprus. In addition to the Ministerial and parliamentary party updates, delegates also held a discussion on Christian Persecution in occupied Cyprus. This followed the recent report commissioned by the UK Foreign Secretary, which included references to persecution at the hands of Turkey in occupied Cyprus, following evidence given by the Federation’s President, Christos Karaolis. Conference delegates also heard from the Chairman of the Cyprus Investment Promotion Agency, the Chief Scientist for Research and Innovation of Cyprus, the MD of Cyprus Seeds and the Chairman of the Cyprus Olympic Committee.
Reception & discussion with UK High Commissioner H.E.  Stephen Lillie 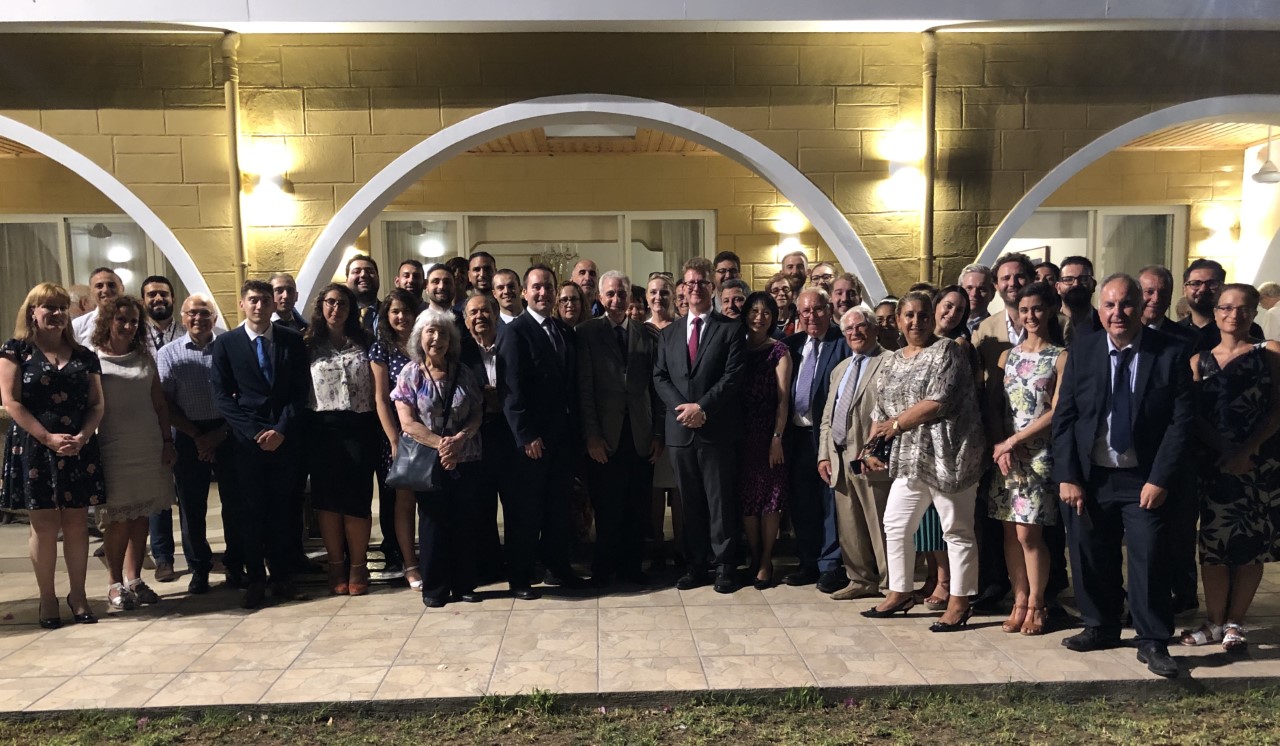 Members of the UK delegation attended a reception hosted by UK High Commissioner to Cyprus, Mr Stephen Lillie, at his residence to celebrate the bilerateral and people-to-people links between the UK and Cyprus.
Roundtable discussion with UK High Commissioner and Ambassadors 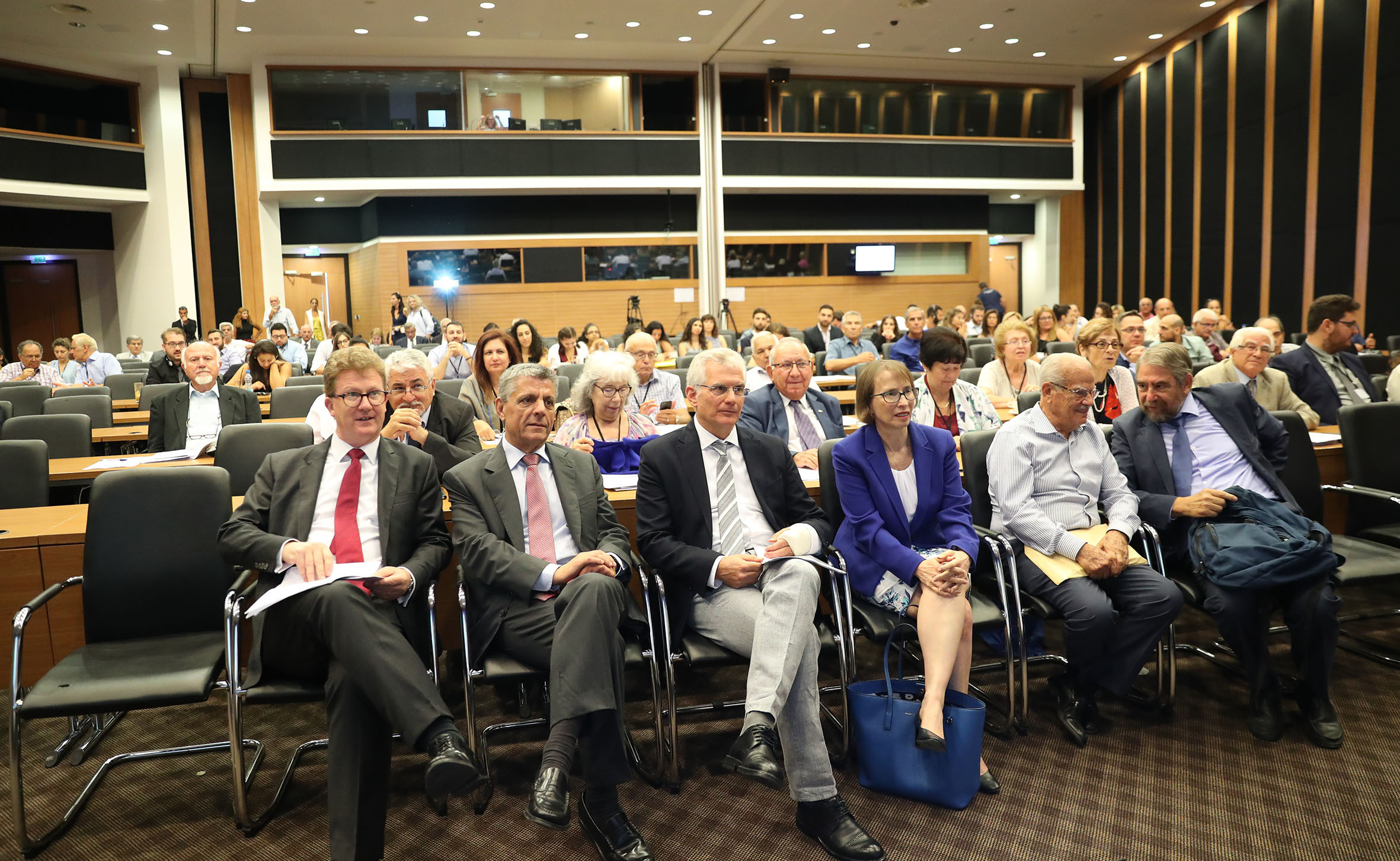 Delegates also had a roundtable discussion with the UK High Commissioner, as well as the Ambassadors of the USA, Greece and Israel. The topics discussed included bilateral relations with Cyprus, exploration and exploitation of energy reserves, prospects for a solution for the Cyprus issue and Brexit.
Briefing and Reception with H.E. President of Cyprus, Mr Nikos Anastasiades 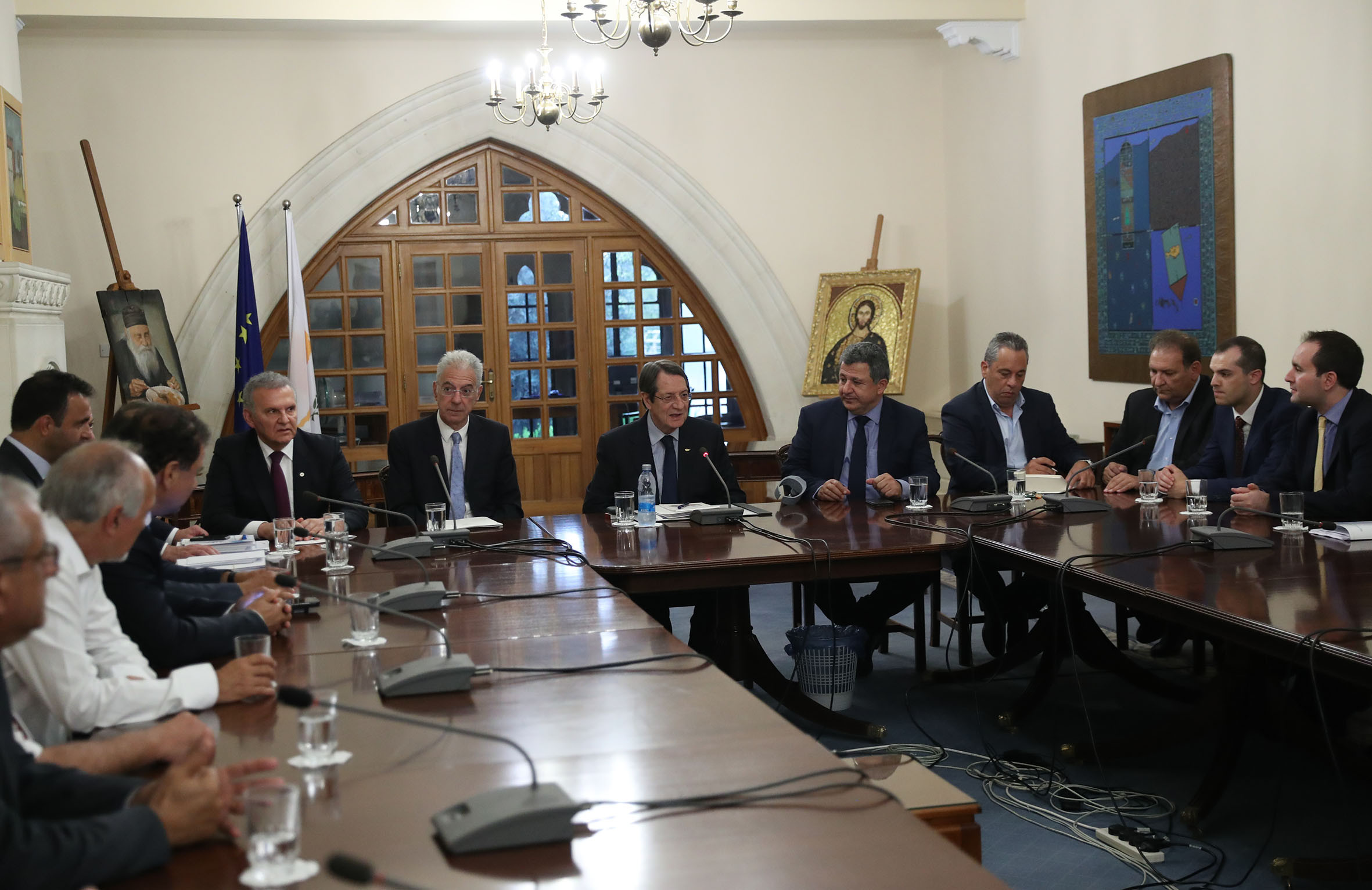 The Executive Councils of POMAK, PSEKA and NEPOMAK had a private meeting with President Anastasiades, at the Presidential Palace, where they received an extensive, confidential briefing on the current developments on the Cyprus issue.
Following the meeting, the President and First Lady, Andrie Anastasides, hosted a reception for conference delegates in the gardens of the Presidential Palace. At the reception, President Anastasiades presented the Medal for Exceptional Contribution to four diaspora Cypriots whose life’s work has been a continuous, active contribution to Cyprus abroad. They were awarded the honour as a result of their lengthy and dedicated service to their homeland, Cyprus.
The four recipients were: former Archbishop of Thyateira & GB Gregorios, Metropolitan of Kenya Makarios, ex-President of the USA Pancyprian Womens division Dr Florentia Christodoulidou & ex-President of the Cypriot Community  of Southern  Australia, Christos Ioannou. 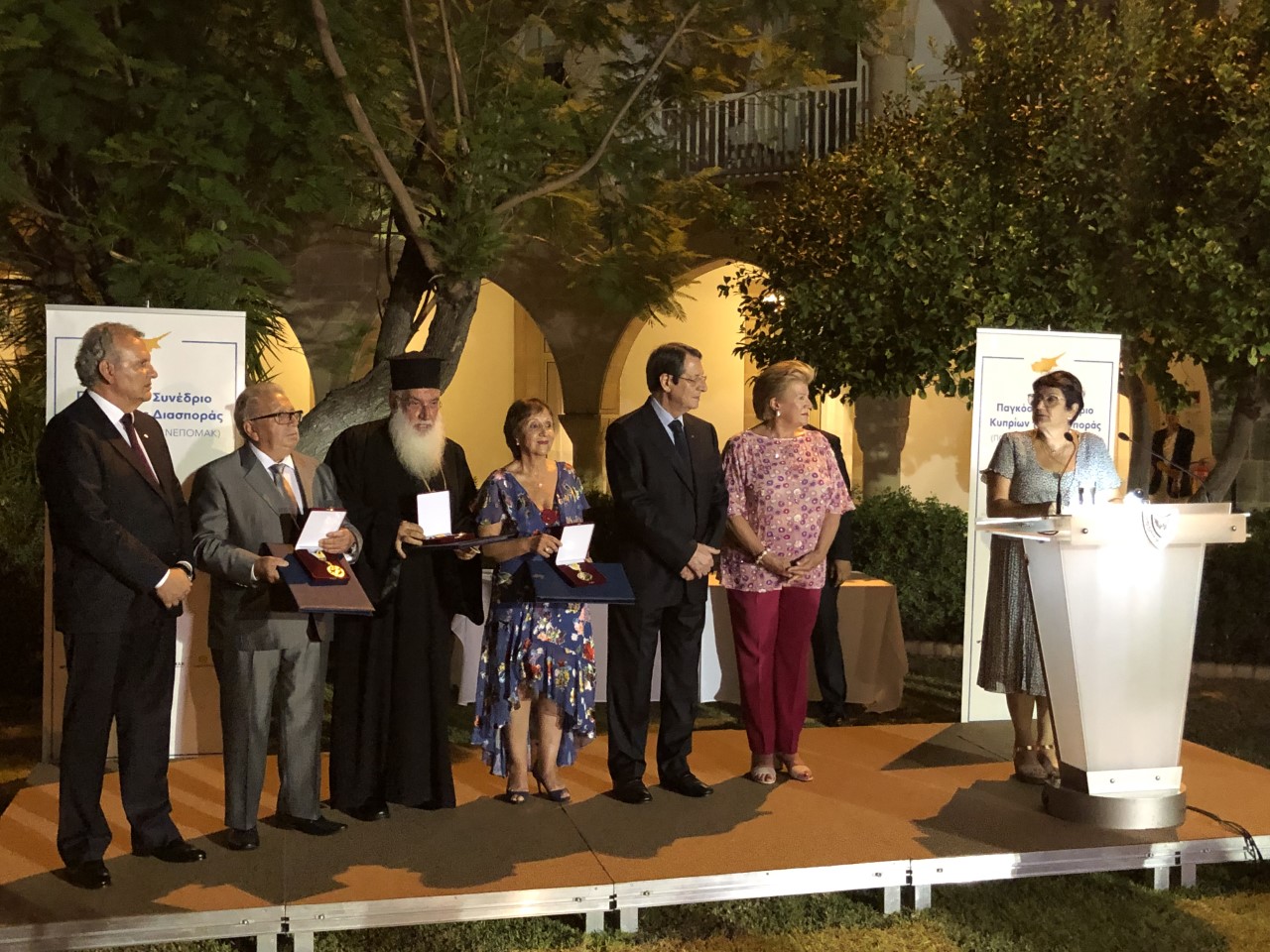 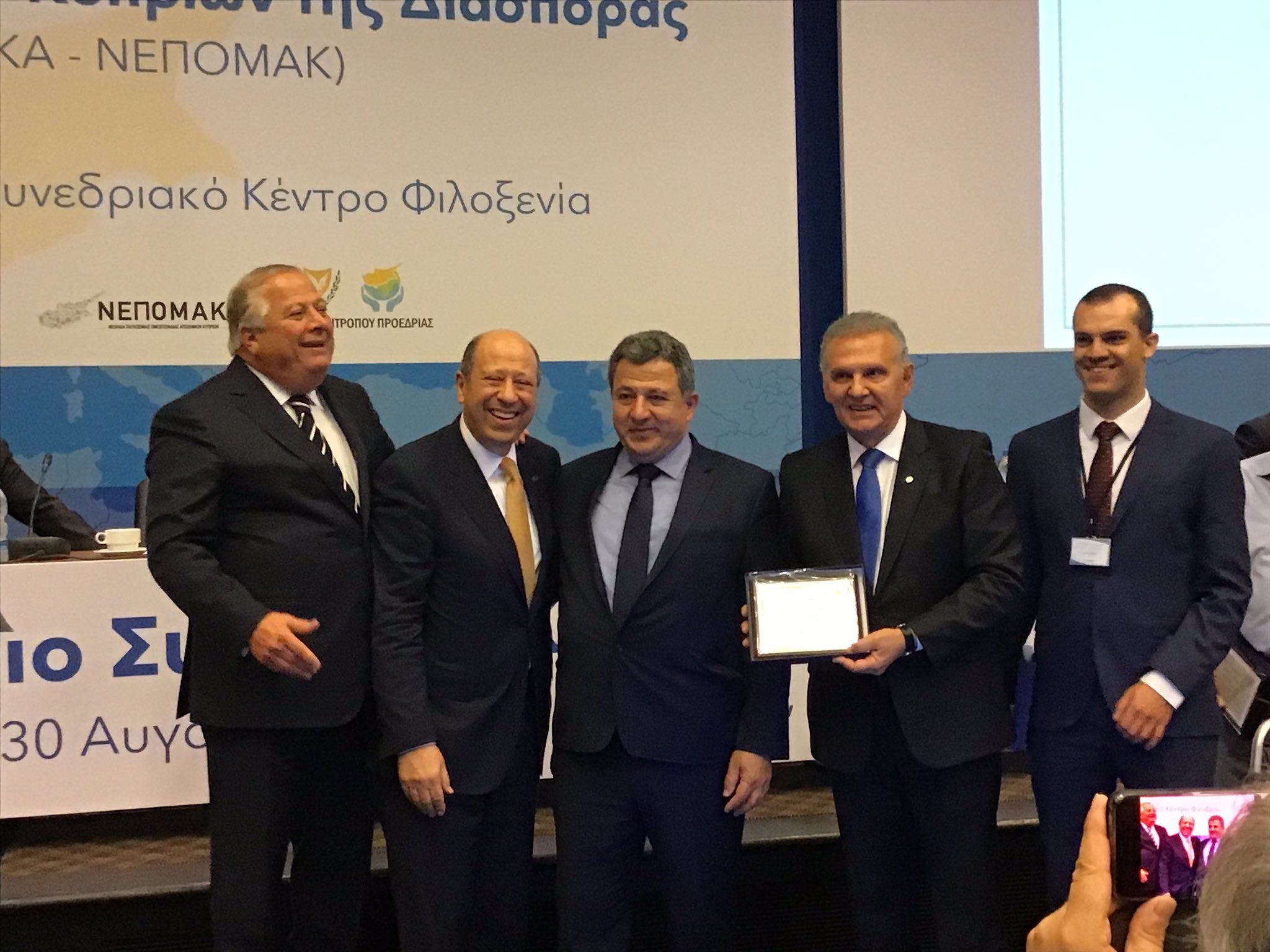 During the course of the conference, Christodoulos Stylianou and Hambis Nicolaou (both Honorary Members of the POMAK/PSEKA Central Council) and retired Cyprus High Commissioner to the UK, Euripides Evriviades, were honoured for their services and dedication to Cyprus and the diaspora movement.
NEPOMAK Executive Council Conference 2019

NEPOMAK (the World Organisation for Young Overseas Cypriots) held its 9th Executive Council conference in Nicosia with representatives from across the world travelling to participate.

At the opening ceremony of the conference, NEPOMAK President, Christos Tuton, conveyed NEPOMAK’s support for the President of Cyprus’ efforts to resume negotiations for a reunified Cyprus. He also spoke about the experience of second- and third- generation diaspora Cypriots and the contribution that NEPOMAK makes in developing their passion for Cyprus and in bringing the global Cypriot diaspora closer together.

There were several workshops that identified initiatives to enhance the effectiveness of the organisation including a focus on NDCP, NCCT, and the scholarships offered by NEPOMAK with various higher education institutions in Cyprus. There was also a discussion about the importance of environmental initiatives and the ways that NEPOMAK can help support protecting Cyprus’ outstanding natural beauty and strengthening its contribution towards tackling climate change. In addition, the NEPOMAK Executive Council attended several briefings by senior Cypriot Government officials (as above).