The National Federation of Cypriots in the UK, the Armenian National Committee UK and Peace in Kurdistan strongly condemn Turkey’s illegal invasion of northern Syria. Turkey’s invasion has already caused the deaths of many thousands of civilians, created hundreds of thousands of refugees and lead to the release of ISIS terrorists from prisons. We are also deeply concerned and appalled by the reports of violations of international law by Turkey in Syria including summary executions and forced demographic change following the invasion – both constitute war crimes.

Turkey’s brutal actions mainly targets Kurds and Christian minorities, who fought nobly against ISIS and have promoted democracy and human rights in the region. We stand in solidarity with the Kurdish people against Turkey’s aggression. Furthermore, Turkey’s invasion has already led to a worsening of the dire humanitarian situation in Syria and aid agencies must be allowed to operate without hindrance.

These recent aggressive actions are particularly concerning given Turkey’s current illegal drilling in the Republic of Cyprus’ Exclusive Economic Zone and despicable history with ethnic minority groups in the region. The Armenian Genocide, Assyrian Genocide, Greek Genocide and Turkey’s ongoing occupation of northern Cyprus have never been forgotten by the international community; yet Turkey refuses to recognise, take responsibility or allow justice for any of these atrocities.

When a crime against humanity goes unpunished it will be repeated. The UK Government should stop all current and future arms exports licenses to Turkey and impose tough sanctions to deter Turkey from its aggressive and authoritarian policies. The UK Government should also put pressure on Turkey to recognise the Armenian, Assyrian and Greek Genocides; and allow a free, united Cyprus through a just and viable solution to the Cyprus issue. 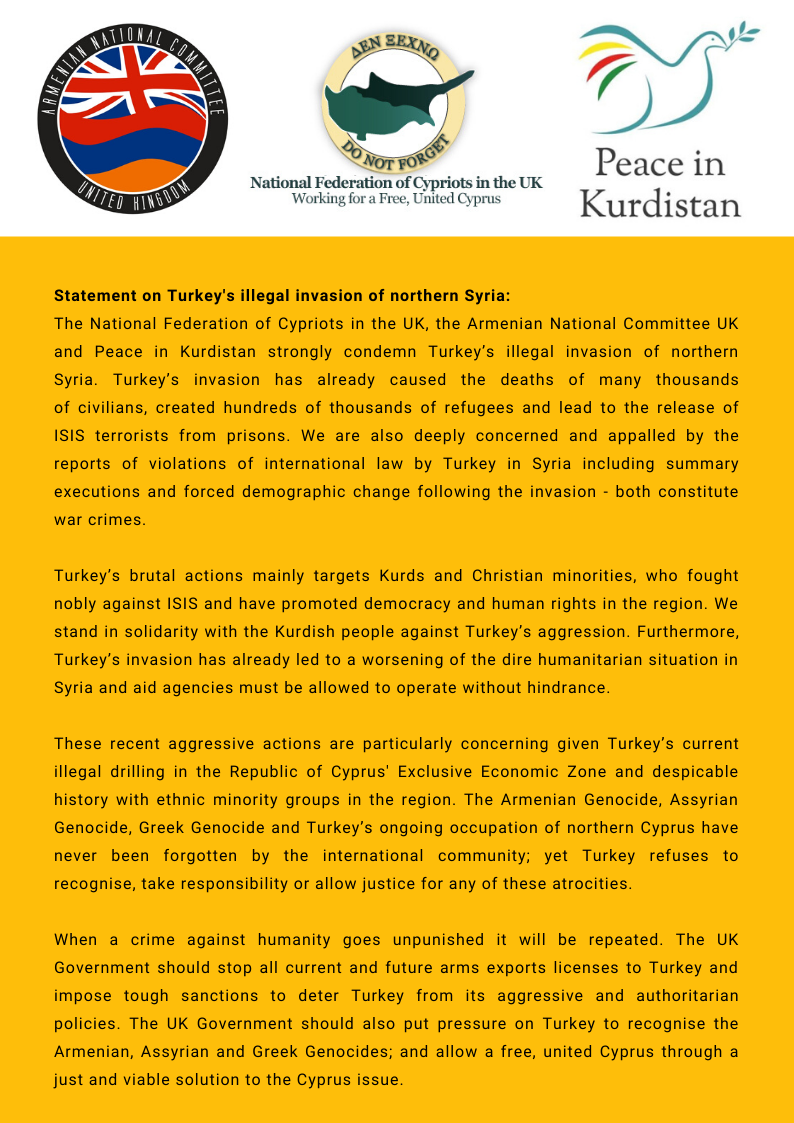